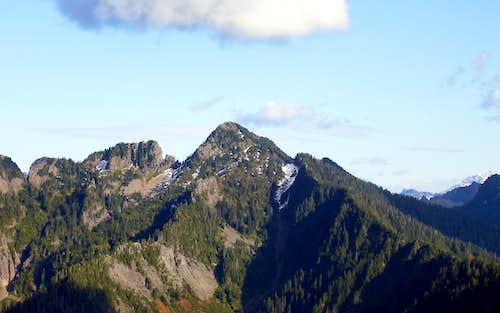 Fletcher Peak from the west. The west gully can be plainly seen in this photo. Photo taken on 10-9-09.

Fletcher Peak from Blue Mountain 11-6-13
Fletcher Peak is the unofficial name given to a little known peak about 14 miles E/NE of Granite Falls. While I do not know for certain, my assumption is that the peak was named for Louis C. Fletcher, a USGS surveyor who is credited for many first ascents in the area. The Cascade Alpine Guide refers to the peak as Canyon Peak, most likely due to the small lake (Canyon Lake) 2.1 miles east of the summit, and the creek that drains its west flanks (Canyon Creek). Climbing Fletcher Peak has unfortunately become a little more difficult this year, as the road that approaches it from the west has been washed out in a few more places.

The Cascade Alpine Guide recommends climbing Fletcher Peak via the West Ridge from Canyon Lake. No offense to Mr. Beckey, but it is obvious that he has never set foot on Fletcher Peak, much less the West Ridge. The West Ridge is very unpleasant, and a nasty little gendarme will prevent one from completing this ridge without class 5 climbing. Approaching from the headwaters of Wiley Creek does not help either, as the gendarme is located east of the intersecting ridge. 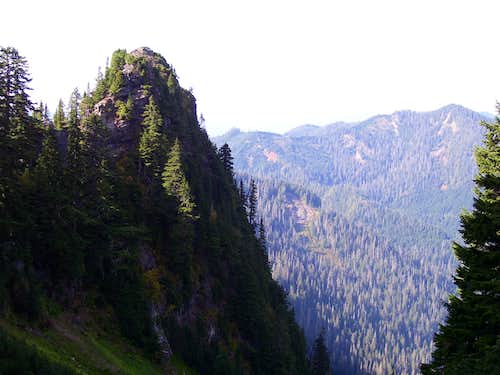 This photo was taken from the west gully at about 4700'. The gendarme in the photo is the one that stopped me on my West Ridge attempt a few years ago. Green Mountain's east summit can be seen in the background.

The "easy" way to climb Fletcher Peak is by a large gully which cuts into the west side of the mountain. This approach worked well for me, as well as the only other climber whose name appeared in the summit register.

Directions: Follow the Mountain Loop Highway east from Granite Falls for 6.8 miles, and turn left on FS 41. After 1.8 miles, make a right turn onto FS 4110. After another 1.8 miles, make a right turn onto FS 4111. After only about 0.3 miles, the driveable portion of this road will abruptly end at a large washout. Climbing Fletcher Peak (or Liberty Mountain) from this road will be much simpler with a mountain bike, so it will be assumed that you are so equipped for the approach.
Follow FS 4111 for another 5.7 miles, until you are at an intersection 0.3 miles SW of Canyon Lake (elev. 2865'). The first 3.5 miles will be fairly good road, with the exception of a few washouts. If you are a fairly competent mountain bike rider, you could probably ride most of the way in, but most people will probably prefer to walk the last two miles. Once at the aforementioned intersection, take the left fork, which will lead north (above and west of Canyon Lake). How long you stay on this road is a matter of personal preference. After 0.6 miles, and past the northeast end of Canyon Lake, you can drop off the right side of the road, and begin starting downhill towards Canyon Creek. You can also continue another 0.3 miles down the road, to the point where it makes a sharp left turn, but this portion of the road is a bit brushier.
Your goal now is to end up on Canyon Creek, at a point 1.1 miles due west of the summit (elev. 2400'). One could go straight down to the creek, and walk the creek bed in late season (slick rocks and blowdowns), or make a gradually descending east traverse (brushy in late season). I tried both methods, and they are about equal on the 'nasty' scale. Once at the aforementioned point (N48 06.775 W121 40.939), you will notice the creek splits. For no particular reason, I took the right fork. I was able to follow this fork to 2800', where it started to get too steep for safe travel. I diverted left onto the wooded ridge which separates the two creek beds. Travel was fairly easy until 3200', then brushy until 3500', where I intersected the left creek bed (this is the fork that actually descends from the 4800' saddle just SW of Fletcher's summit).

The image below was taken at 3500', and looks up towards the saddle. 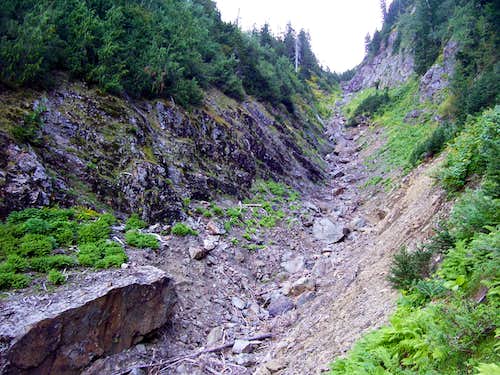 
Here is another photo taken at 4400' looking up towards the saddle. 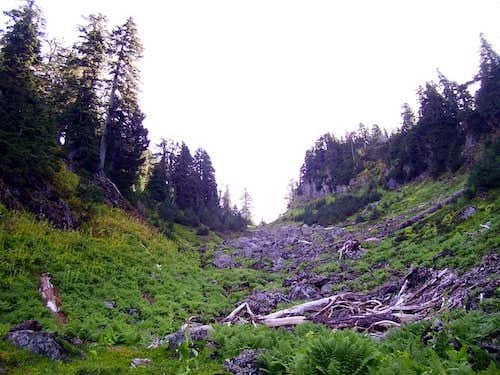 Travel in the gully was easy class 2 scrambling. This gully remains snow filled until late in the season, so an ice axe (and possibly crampons) would be recommended for any climb done before September. Once arriving at the 4800' saddle, turn left, and scramble Fletcher's easy south slopes to the summit (class 2). 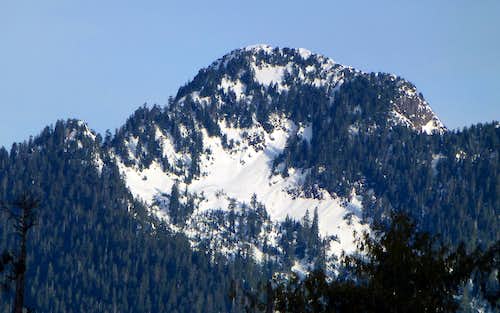 Fletcher Peak from Everett Peak. My route came in from the left to the obvious saddle, then finished via the SW Face.

Here are a few pano's from the summit. 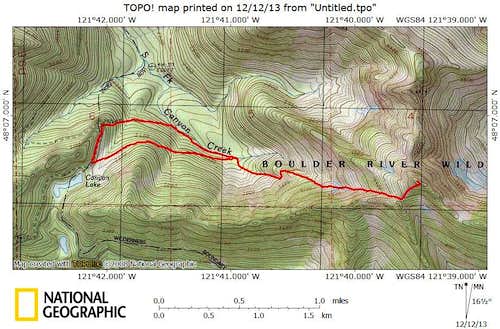 Climbing Fletcher Peak is certainly not for everyone. It is a lot of work for a 5274' peak. For the same amount, and perhaps less effort, one could climb nearby Liberty Mountain, which is a little more impressive. But, for the climber who has done everything, Fletcher Peak might provide an interesting challenge.

Note: On the descent, I attempted to follow the main creek drainage (left fork as referenced in the route description) all the way down to the fork at 2400', but I got cliffed out at about 3100'. I ended up scrambling back to the wooded ridge I used for the ascent. In early season, the left fork may work better when it is snow filled (just guessing).
Update (1-29-15): There is now a different approach that is once again viable for approaching Fletcher Peak. In 2014, Forest Service contractors 'decommissioned' FR 4131, which removed all of the brush that had once choked this old roadbed. FR4131 can be seen on the upper-left corner of the topo map above, coming in from the north. It is about four miles to walk to the end of this road from FR41 - 'tank traps' make it unsuitable for bikes. In terms of overall difficulty, this approach is probably the equivalent of the route described above.

Follow the Mountain Loop Highway east from Granite Falls for 6.8 miles to Forest Service Road #41 (left side of highway - the sign for the Robe Canyon Trail will be on the right side of the highway). See the route description for the remainder of the approach directions.

No permits or passes are required for climbing or camping in this area.

The only logical camping on this route would be at or near Canyon Lake.