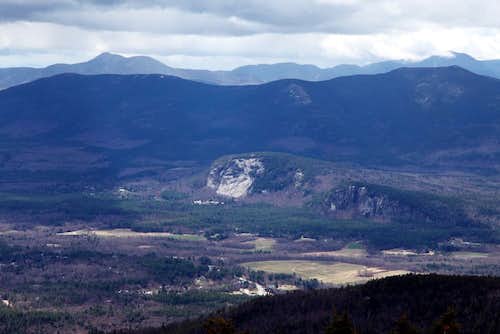 Saco Valley's west side
Though often considered a single mountain, "Moat Mountain" consists of at least three named peaks: North, Middle, and South.  North Moat already has a SummitPost Page, but the Middle and South peaks are at least as worthy.  The Middle and South peaks are only half a mile apart and joined by an easy trail, so it makes sense to devote a single page to both.
Jointly, the Moats form the west wall of the Saco River valley at North Conway.  Running about eight kilometers from Lucy Brook (which separates them from Little Attitash, home to the ski resort) south to the Swift River valley (beyond which begins the region of Chocorua), they rise behind the famously climbable outcrops of Whitehorse and Cathedral Ledges.  All three peaks of the Moats offer panoramic summit views.  North Moat is tallest, but Middle Moat has the most above-treeline area at the summit, and South Moat has the pointiest peak.

The trailheads for these peaks are in or near Conway, New Hampshire.   Conway is a tourist town south of the Presidential Range in the White Mountains of New Hampshire.  From points south such as Boston, you can take interstate 93 north and then route 112 east, or take interstate 95 to Portsmouth, New Hampshire, and then follow route 16 northward.  For concreteness, directions on this page will start near the center of Conway proper, at the intersection of routes 112 and 16.
The Moat Mountain Trail traverses the three peaks of this range; it is often hiked as a one-way traverse. 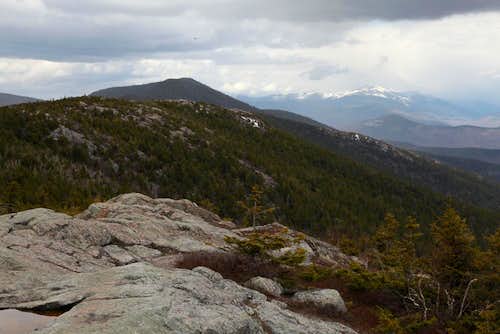 view north
The most direct access to South and Middle Moat is from the south.  The trailhead is on Dugway Rd (shown as Passaconaway Rd on some maps).  From the east end of route 112, take route 16 northbound (due east) for 1.2 km, and take your first left onto West Side Rd.  (It's directly opposite rt 153 southbound, and just before route 16 takes a sharp left.)   Bear left at the fork (don't cross the covered bridge), cross the Swift river (alongside a covered footbridge), and take the first "real" left onto Passaconaway Rd.  Follow Passaconaway Rd westward about 5 km (it'll become Dugway Rd when you enter territory belonging to the town of Albany, even if your map doesn't say so) to the trailhead.
The northern trailhead is on West Side Rd, just north of Cathedral Ledge.   Look for a sign that says "Diana's Baths".
The very scenic Red Ridge trail climbs its eponymous ridge to a point on the Moat Mountain Trail in between North Moat and Middle Moat.  The most straightforward access to the Red Ridge trail is via the Diana's Baths trailhead (making an excellent loop with North Moat), but it can also be reached via the Whitehorse Ledge Trail. You could also, though I don't know why you would, approach the Red Ridge trail via old logging roads starting in the Birch HIll neighborhood.  Finally, if you were desperate to use the southern trailhead and make an almost-loop, you could use the Moat Mineral Site Trail and an old logging road for a long route to/from the Red Ridge trail.
There are no approach trails from the west, other than the Attitash trail, which reaches Lucy Brook near the north end of the Moat Mountain trail.

I chose a loop from the Diana's Baths trailhead, using the Moat Mountain Trail up North Moat, proceeding over Middle to South Moat, then backtracking to the Red Ridge trail.  That's about an 11-mile day. 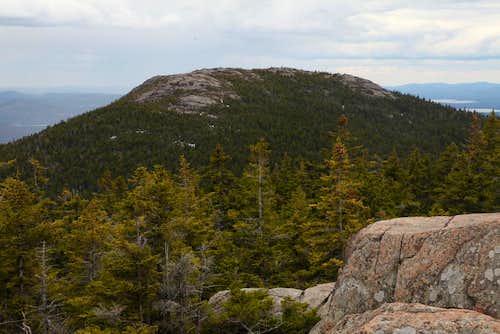 Middle Moat
But the more straightforward approach to South and Middle Moat is from the southern trailhead on Dugway Rd.  Simply follow the Moat Mountain Trail northward.  It's 2.7 miles one way to South Moat, 3.3 to Middle Moat, 5.3 to North Moat, and 9.7 to traverse all the way to West Side Rd.

WMNF trailhead parking $3/day. Enforced at the Diana's Baths trailhead, but I believe the southern trailhead is on state land. 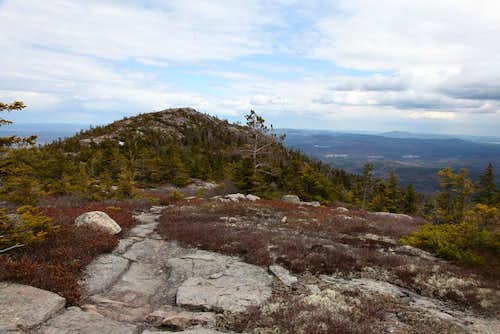 Year-round.  I'm not sure the trailhead parking gets plowed in winter; call the WMNF rangers to check.
Note that the Red Ridge trail fords Lucy Brook, which may be dangerous in early spring and very unpleasant in early winter.  (The north end of the Moat Mountain Trail crosses Lucy Brook too, not far above the Red Ridge trail junction, but the crossing is easier.)

Not needed - this is a day-hike even in winter.  The nearest campground is probably the Covered Bridge campsite on route 112.

More photos from my hike

You might want to add that the mountain is in New Hampshire so it helps with searching.

Done, thanks. Selected country and continent too.