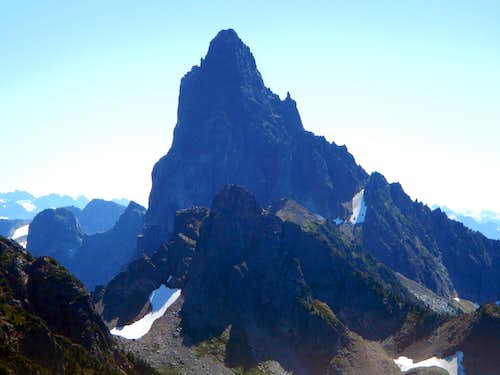 Slesse Mountain View
Macfarlane Peak is a lesser prominent peak located at the northwest end of the long ridge between Slesse Creek and Nesakwatch Creek in the Canadian Cascades of British Columbia. The highest point along Slesse Divide is Slesse Mountain itself, a real monolith of a mountain. Many make the climb to Macfarlane’s summit just to catch a good view of that beast.


The Pierce Lake Trail passes by the larger of the two lakes and then becomes an unofficial trail leading to the smaller upper lake, a gain of over 1200 meters. From there another boot path ascends the northeast ridge of Macfarlane, which is another 300 meters. Along the northeast ridge there are a few short scramble sections, class 2 and 3. 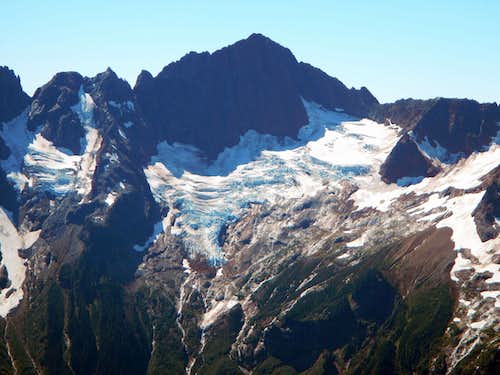 Mount Larrabee
Pierce Lake, the larger of the two, is where the official trail ends. Good camping can be found there. Please use extra care if camping at Upper Pierce Lake, for this is in the tender alpine zone. Between the two lakes one must ascend a rugged trail along the side of a cliff band. This area might require extra care and crampons/ice axe if snow is present. 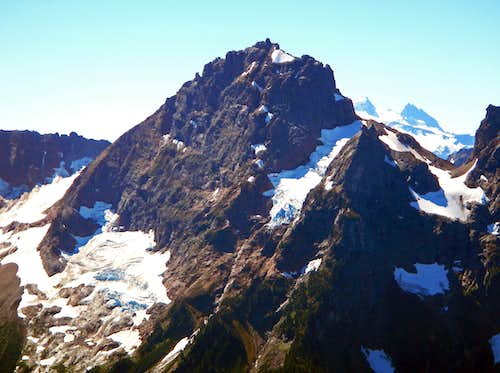 American Border Peak
Upper Pierce Lake is nestled in an amphitheater shaped bowl. On the other side of the bowl sits Mount Pierce. Those with extra vigor may wish to ascend Mount Pierce as well for a full day trip. But many average parties may prefer to take two days just for Macfarlane. From the trailhead to the summit requires 1765 meters of vertical gain (5790 feet) and 21 kilometers round-trip (13 miles). 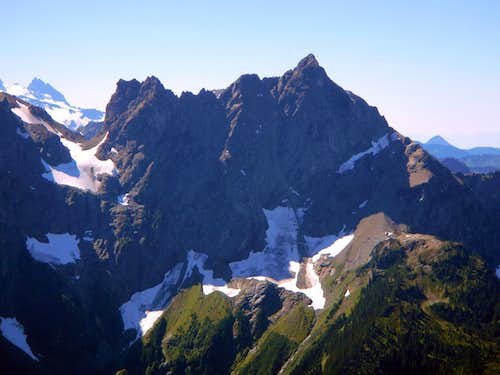 Canadian Border Peak
The views from the summit of Macfarlane are astounding. Down below, Pierce Lake is visible and beyond that to the north is the Cheam Range. Welch Peak is it's obvious highpoint and to Welch Peak's left (west) is Baby Munday Peak. One can’t help but wonder how such a gnarly looking peak could get a name like that. To the west is McGuire Mountain and the Chilliwack River valley beyond which lies the Frasier River valley. 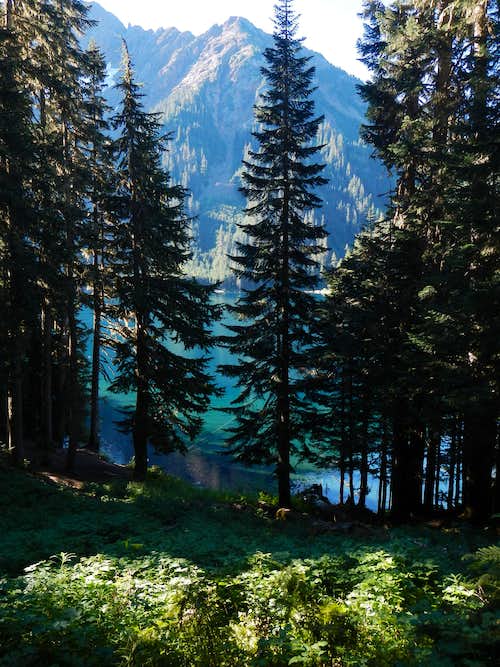 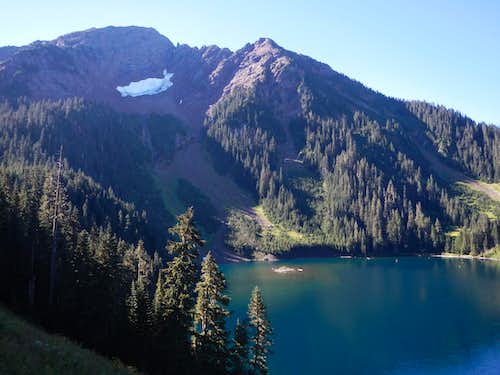 Macfarlane Above Pierce Lake
Follow the trail until it comes to a log bridge across Pierce Creek. On the far side of Pierce Creek continue along the trail to Pierce Lake. From Pierce Lake continue on the trail as it crosses an open slope east of the lake and then ascends the upper basin though an avalanche debris zone. The trail is less well defined here and might be soggy in the spring or early summer. There are a few steep sections which bypass headwalls. 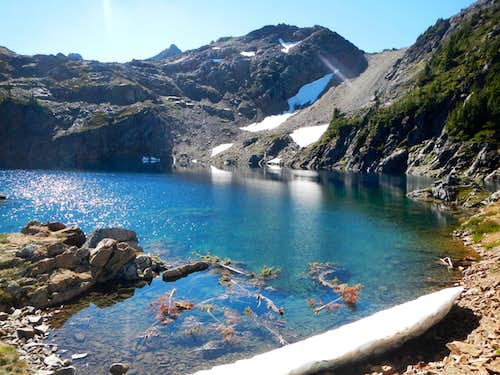 Upper Pierce Lake
Below the first headwall, cross the creek to the left side, where the trail goes up through the trees. Eventually you will come to the base of the second headwall. The second headwall has an obvious ledge which traverses through the middle of it. Do not be tempted to use the ledge. It is down-sloping and hazardous when wet. Instead, follow the faint trail across the talus which ends at the right side of the headwall. Here you will see where the trail ascends steep dirt along the right. 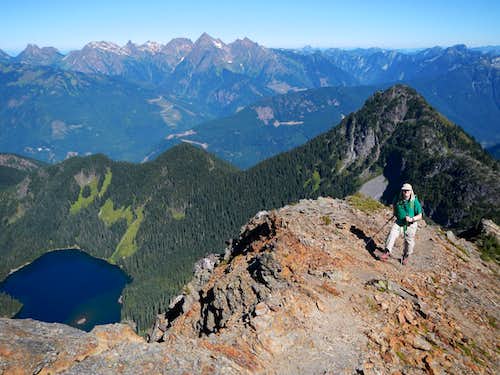 High on the Northeast Ridge
Above the second headwall the trail ascends left of the creek on open slopes until it reaches the base of some bare rock slabs. Scramble up the slabs and you will come to Upper Pierce Lake. From the upper lake, turn right and ascend the northeast ridge. There is a boot path. Several short sections of class 3 scrambling require some care but the exposure can be minimal depending on which way you go. 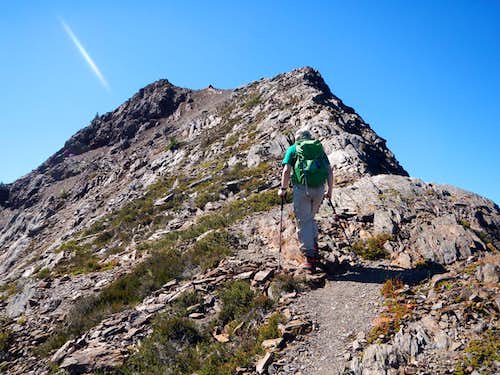 From Vancouver BC, drive east on Hwy 1 for 86 kilometers, through Abbotsford, and take exit 119A. Turn right and follow Vedder Road south for 5.5 kilometers through the town of Chilliwack. Turn left on Chilliwack Lake Road. Proceed another 22.5 kilometers (14 miles) to the signed Pierce Lake Trailhead on the right. Follow this road 300 meters to the parking area. Do not leave valuables unattended in your car. 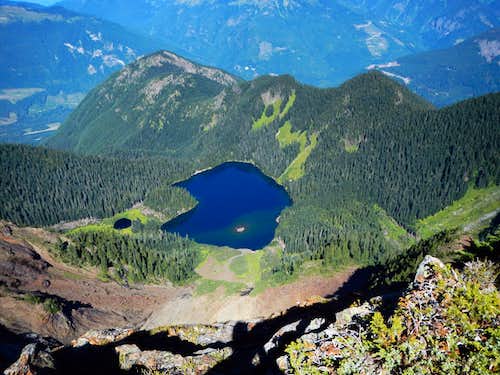 Summer and fall are best, but spring ascents may be possible depending on snow conditions. If attempting in the spring, bring snow travel gear and beware of cornices and avalanche.

To the best of my knowledge, camping is permitted. Leave no trace and use extra care in alpine zones with respect to sensitive plant life.