In the western lobe of the Pemigewasset Wilderness, between Franconia Ridge and the Twin Range, rises a 4000-foot mountain, taking the form of a wooded ridge running north to south. This mountain has no official name, but a cliff at its southern end (and/or a 3660-foot peak above the cliff) is called "Owl's Head."

The 4025-foot summit is listed on the AMC's New Hampshire 4000-Footer List under the name "Owl's Head", and over the decades the AMC's maps have used that name to designate the summit and/or the whole mountain. One recent AMC map coined the name "Owl's Head Mountain", which I find to be a good solution, but that's unofficial. Sticklers for accuracy should call the summit "Unnamed Peak Above Owl's Head".

This page is about Owl's Head Mountain, i.e., the whole mountain, and primarily about the routes to the summit, i.e., to UPAOH. (I have not climbed Owl's Head sensu strictu.) Thanks to the AMC 4000-footer list, it is certain that visitors to UPAOH constitute the vast majority of hikers on "Owl's Head Mountain". Unless otherwise indicated, this page will use "Owl's Head" for brevity, even when describing UPAOH. 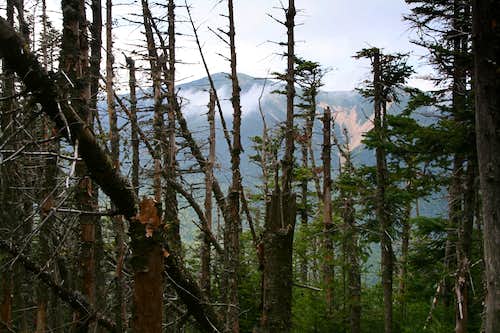 "view" from near the summit

Owl's Head is a mountain for hikers who savor the journey more than the destination. Indeed, the eight-mile approach hike dominates the experience, while Owl's Head itself has been described as "a mountain with much to be modest about".

At a mere 4,025 feet, Owl's Head ranks near the bottom on the AMC's New Hampshire 4000-Footer List, and its summit is completely treed-in. Depending on tree growth, storm damage, and snow depth, you may be able in any given year to get glimpses of the Bonds or of Franconia Ridge from near the summit, but typically the summit is viewless except to skilled tree-climbers. Good views toward Franconia Ridge are available from the rockslide on the western face, but far better views can be had with far less effort by climbing any of the higher peaks that ring Owl's Head on all sides.

Historic footnote: misplaced summit sign
Starting at an unknown date (Dave Metsky suggests the late 1990s) until the end of summer 2005, there was a sign and cairn where the heavily-traveled trail stopped on the top of the ridge. This spot was, unfortunately for peak baggers, 0.2 miles south of the true summit. By 2010 the trail was well-trodden all the way to the true summit (and even a few paces beyond, peak-baggers apparently being fearful of being fooled twice).

For a few years after 2005 there was a lot of discussion about "old" and "new" summits, but my understanding is that the 4025' spot on maps has never moved: the "new" summit is exactly where the summit was known to be decades ago.

Unofficial Trail - Sometimes Unmarked!
Another distinctive thing about the mountain itself is that it is the only AMC-listed 4000-footer in New Hampshire whose summit is more than a few paces from an officially-maintained trail. Instead, access is via a rockslide and an unmaintained path. In theory, the path's unofficial status means that downed trees are not cleared and the path is not marked by any signs or blazes. In practice, there is usually at least one cairn at the beginning of the trail, another to mark the summit, and by midsummer somebody will have cleared most of the blowdowns. The path itself is well-traveled and easy to follow. Back in 2005 the rangers erased most of the blazes and attempted to remove signs and cairns, but as of summer 2010 they seem content to allow a few cairns and a small summit sign. 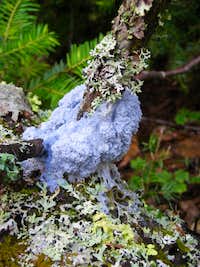 The "view" from the summit

Water Crossings!
Other than its length, the approach is remarkable for two somewhat challenging water crossings. While not especially dangerous, these will be intimidating when high, and often impassible for children.

More Naming Confusion: spelling
The U.S. Geological Survey's Board on Geographic Names has it spelled "Owls Head" (no apostrophe), but I believe that is due to a general no-apostrophe policy and does not reflect local practice. Although some maps using USGS data have picked up the USGS spelling, the Appalachian Mountain Club, for example, consistently includes an apostrophe in the name of this mountain. Since this mountain is of most interest to hikers following the AMC list (and because the apostrophe is grammatically required) this page follows AMC practice, not the USGS standard.

Geographic Classification
Owl's Head lies between the Twin Range and the Franconia Range, and properly belongs to neither. I have included it on the Twin & Franconia Range page as a matter of geographic convenience.

Owl's Head is located in the western lobe of the Pemigewasset Wilderness, just east of Franconia Notch. Access is easiest from the south, using the
Lincoln Woods trailhead on the Kancamagus Highway (rte 112). Rte 112 crosses Interstate 93 in the town of Lincoln.

The most common route is via the Owl's Head Path.

White Mountain National Forest trailhead parking $3/day. Discount pass
Group size limited to 10 people within the Pemigewasset Wilderness. New guidelines will limit off-trail group size to four people [ref: RoySwkr], but it is not known whether this will be enforced on the Owl's Head slide.
Common-sensical Rules on fires, camping, litter, biological waste, etc.
Hunting (in the fall for most species) is allowed in the WMNF, but not in close proximity to trails. Info & permits.
Black pond and the Pemigewasset River are stocked with trout. NH fishing license info

Year-round. Two significant water crossings may be dangerous in flood season, and daunting in in cold weather.
The rockslide may be difficult when icy or very wet.

The nearest High Mountain Hut is Galehead Hut, located to the northeast (about seven trail miles from the bottom of the rockslide).

The nearest trailside campsite is 13 Falls, located to the north of the mountain (about 3.5 miles north of the rockslide via the Lincoln Brook trail). AMC campsite info

Backcountry Camping is allowed, subject to the usual rules:
Unless otherwise posted, you may camp:

Roadside Campgrounds
These are abundant in New Hampshire. The nearest is Hancock Campground, located near the Lincoln Woods trailhead. Reservations

Due to low altitudes and thick tree cover, expect milder conditions on this hike than for most WMNF peaks.
Water is plentiful for most of the hike since the trail follows brooks all the way to the rockslide.