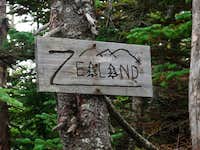 The summit of Zealand Mountain is completely treed-in. Partial views are available at intervals along the high ridge trail on either side of the summit, but the main attractions of Zealand lie at its eastern end, where you'll find a spectacular view from south-facing cliffs at its eastern end ("Zeacliff"), and also the beautiful Zealand Falls. Zeacliff and Zealand Falls are each given a section on this page.

Zealand is the 31st-highest mountain in New Hampshire according to the AMC list,and gets plenty of foot traffic due to its location on the Appalachian Trail and its proximity to the easily-reached Zealand Falls hut.

This mountain makes little impression from a distance: it consists of a long low ridge running northeast from Guyot, with some small forested bumps along the top. Were it not for its eastern end (Zeacliff) forming one side of Zealand Notch (Whitewall Mountain forms the other), and Zealand Falls, this mountain would be of little interest except to list-obsessed peak baggers.

Zeacliff is surmounted by a small unnamed peak, with about eighty feet of vertical separation between this point and the summit ridge. Though from some angles "Zeacliff Point"can be distinguished from the main ridge (the gully containing Zeacliff Pond partly separates the two), the consensus of local usage seems to be to treat Zealand-Zeacliff as a single mountain.

The _White Mountain Guide_ gives an explanation for the mountain's unusual name: Zealand Notch was originally known as the New Zealand Valley, "presumably owing to its remoteness", but the name was shortened "for the convenience of the railroad and post office" (I assume during the logging heyday of 1890 - 1950, and probably prior to the fire of 1900) . The shortened name was then applied to the mountain.

Steps from Zealand Falls you can find a geological oddity: Zealand Pond, which straddles the boundary between the Merrimac and Connecticut river basins. It has two outlets, one draining South (into Whitewall Brook), and one draining North (toward the Zealand River). 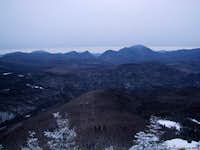 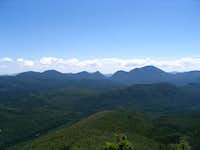 The cliff atop the eastern end of Zealand affords excellent views west across Zealand Notch to Whitewall Mountain, over Whitewall to the Willey Range and the Presidentials, and south across the Pemigewasset Wilderness, with a nice angle on Carrigain Notch in particular.

When hiking the Twinway, do not skip the short side trail to the Zeacliff overlook. 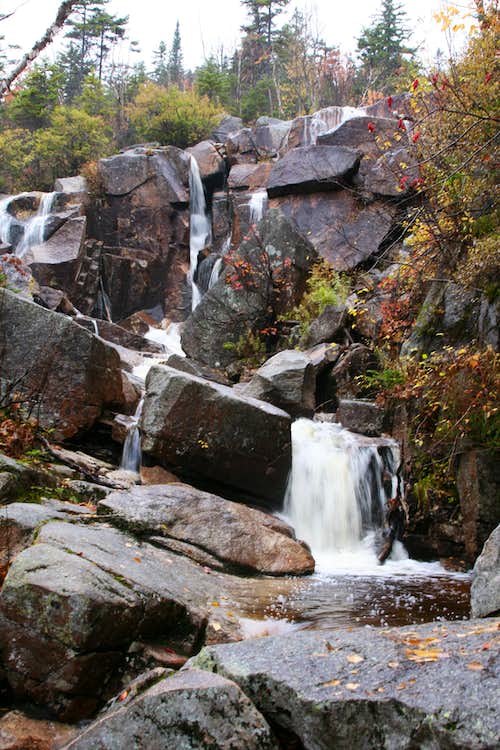 A picture is worth a thousand words, so without further ado:

Zealand Mountain lies on the northern edge of the Pemigewasset Wilderness within the White Mountain National Forest. The "Pemi" lies within an area bordered on the west by interstate 93, on the northwest by route 3, on the northeast and east by route 302, and on the south by the Kancamagus Highway (route 112). The shortest and easiest trails to Zealand Mountain are from the North via Zealand Road, but longer approaches from all directions are commonly done, especially by overnight hikers making use of huts or campsites.
Zealand Road extends south from Route 302 about 2 miles east of its intersection with Route 3. Route 3 is most easily reached from Interstate 93 - the intersection is just north of Franconia Notch State Park.
Note that Zealand Road is closed in winter.

White Mountain National Forest parking $3 per day.
There's a deposit-box system for purchasing parking at the trailheads, or you can purchase annual or multi-day passes, which is much cheaper, from designated vendors.

Note that Zealand Road is closed in winter.

The summit can only be reached by a short, nameless, and nearly flat spur trail which dead-ends in a clearing amid evergreens. Some helpful soul has placed a wooden sign in the clearing announcing "Zealand".

A scenic and challenging variation on an eastern approach is to use the Zeacliff Trail, a steep trail climbing from Zealand Notch (follow the Ethan Pond trail south 1.3 miles from Zealand Falls) to reach the Twinway near "zeacliff peak".

An even more challenging variation is to reach the Twinway from the North, via North Twin. From Haystack Road, take the North Twin Trail to North Twin Mountain, continue over the North Twin Spur to the junction with the Twinway at the South Twin summit. Total distance: 8.4 miles, about 4500 feet vertical gain.

Year-round.
Notes on winter climbing:
-Since it is part of the Appalachian Trail, the Twinway is usually well-packed, but snowshoes are helpful after storms or late in the season. Crampons (or snowshoes with good teeth) are often useful for climbing the sloping sections of hardpack.
-Zeacliff Trail is much less frequently traveled, so be prepared to find and break trail. It is also much steeper, so crampons are usually needed, and an ice axe might be a good idea, especially for descent.
-Zealand Road is closed in winter. Current status

For either hut, advance reservations are essential.

Trailside Campsites
On a first-come-first-served basis (but "group notification" is requested), you can use established trailside campsites, of which the nearest is Guyot Campsite & Shelter, located between Mts Guyot and Bond, ie about two miles southwest of Zealand's summit. Find info about it on the AMC's list of campsites.

Roadside campgrounds abound in the region. The three nearest, all located at the north end of Zealand Road, are:
Surgarloaf I
Sugarloaf II
Zealand campground.

Backcountry camping is also permitted. Here are the rules:
Unless otherwise posted, you may only camp:

Weather conditions on Zealand's high ridge can be expected to fall somewhere between those on the higher summits, such as Mt Washington, and conditions in the valley.