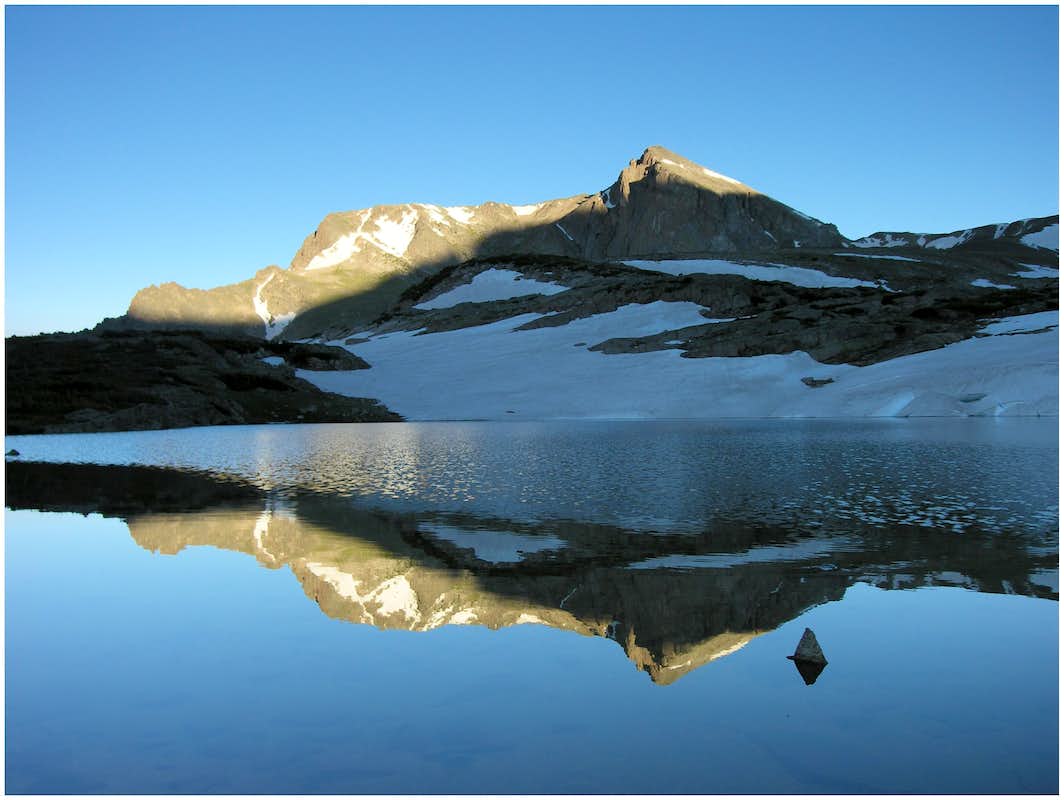 Don’t forget that Wild Basin is within RMNP boundaries, if interested, you will need a camping permit to split your 17-mile adventure into two days. Attaining Wild Basin camping permits is not as difficult as you may think; just stay away from weekend crowds. Pilot Mountain is an officially named, unofficially ranked summit anchoring the jagged southeast ridge of Mount Alice. Over the years, Pilot has eroded into more of an elegant feature of Mount Alice than its own mountain. However, some of best climbing on Mount Alice resides directly on Pilot Mountain. From Pilot’s tiny summit the north face is protected by 450-ft of near vertical slabs of granite, while 800-ft of air does its best to protect Pilot’s south face. Pilot’s summit block is connected to Mount Alice by a classic knife-edge ridge. Expect a short but complex, class 4 route with enormous exposure. Adding Pilot Mountain to the fun Hourglass Ridge of Alice makes for a very rewarding, and memorable day.

Pilot Mountain was probably named because it’s hard-to-miss summit soaring above Thunder Lake. From the lake patrol cabin Pilot is quite impressive, from anywhere else; Pilot seems to blend in to its surroundings. It’s just another reason why Pilot’s exposed and tiny summit doesn’t host many visitors. Tough logistics makes Pilot a 100% guarantee for super solitude. If bomber rock, mad exposure and spooky solitude excite you, then make Pilot a high priority.

This well named rock pinnacle resides within a section of ridge just north of Isolation Peak’s classic North Buttress Route. Like Pilot, The Cleaver is officially named but it is not ranked. In theory, The Cleaver is another graceful feature of a bigger mountain (Isolation Peak), similar to the Pilot Mountain/Mount Alice relationship. However, combining Isolation and The Cleaver could be one of Rocky Mountain National Parks longest routes for attaining a single summit along the Continental Divide. The Cleaver
I’ll remember The Cleaver as a great place to be instead of a great summit. Great places are sometimes a lot better than great summits but for some reason summits get all of the attention. That’s not necessarily a bad thing for a great place like The Cleaver, for this obscure gem only inspires about 5 people a year. The view combines perfectly with huge solitude, and makes The Cleaver a place worth the 10-mile approach. The Cleavers small summit overhangs 500-ft above the pristine upper East Inlet, providing some nice exposure and great views. Expect class 3 climbing en route to its summit from the Boulder Grand pass area. An ascent of Tanima Peak east ridge en route to The Cleaver makes good sense. You can descend the Divide via Boulder Grand Pass.

At 12,420-ft, Tanima Peak is another forgotten summit of Wild Basin. Tanima is officially named and it’s an officially named 12ver. Its lesser-known summit doesn’t measure up to its higher neighbors, but views along its east ridge are excellent and very unique. The view of Wild Basin’s southern ramparts is excellent. The east ridge also provides some nice class 3 scrambling on bomber rock. Combining The Cleaver with Tanima Peak via Thunder Lake makes for a worthy loop route.

Getting there provided by Brenta

The common approach to Thunder Lake is from the Wild Basin Ranger Station trailhead located in Wild Basin, Rocky Mountain National Park. The Wild Basin entrance to the Park is located on Colorado Highway 7, between Allenspark to the south and Meeker Park to the north. After turning west from Colorado 7, go for less than half a mile until you turn right at a sign indicating the Wild Basin entrance station. The Wild Basin Ranger Station trailhead (8480 ft) is located at the end of the dirt road that starts at the entrance station. The dirt road is passable by passenger cars.