East and West Mount Sopris as the clouds break. Photograph courtesy of benhabsstal.

The high mountains of Colorado’s Elk Range are among the finest peaks in the Rockies. With Wilderness designation, these protected mountains are rugged, steep and aesthetically pleasing. Crystal clear streams, pristine alpine lakes and lush, green vegetation are common sights, allowing for many magical photo opportunities.

The Elk Range can be sectioned into three sub ranges, the Central Elks (Maroon Bells massif and Capitol massif), the Raggeds (Chair Mountain, Ragged Mountain and the Treasure Mountain massif) and the West Elks (the Beckwith’s, the Owens Mountain massif, West Elk massif and the Anthracite Range.)

The scenic beauty of the Elk Range is mostly due to its unique geology. There are two geological types of rock that are clearly evident in the Elk Mountains, the tertiary intrusives, and the stratified sedimentary. The whitish, gray rock of the tertiary intrusives is responsible for the sweeping, skinny ridges that connect point-to-point, evident in Snowmass Mountain, The Beckwith’s, Capitol Peak and the Chair Mountain massif. Second, the stratified purplish-red, sedimentary rock of the Permian age, which has been pushed upward to form towering stacks of rotten and crumbling rock, like Cathedral Peak, Teocalli Mountain, Pyramid Peak, Maroon Bells and Buckskin Benchmark. Combining these two types of geology with its lush, green vegetation, the Elks provide a distinct and different kind of beauty.

Finally, these glorious mountains have remained in respectably good shape over the years, lacking the substantial mining scars of other nearby mountain ranges. Thanks to the Maroon Bells Snowmass Wilderness, we can visit large sections mountainous terrain knowing not much has changed since early exploration.

The Elk Range has a slight reputation for difficult and dangerous climbing, due in large part to the loose, crumbling nature of the purple sedimentary rock of the Maroon Creek Valley and the teetering white blocks and fragmented rock pinnacles of the high 14ers surrounding the Pierre Lakes Basin. Most of the prominent high peaks in this range require solid route finding and climbing skills. If you choose to spend time hiking and climbing the Elks, expect a different experience every time out. The experiences here can be good or bad. It could be an experience that you won’t ever want to forget, or an experience that you will want to forget, but can’t. It’s all here in the Elks, now it’s up to you to discover the ruggedness and beauty that so many talk about.

Above text courtesy of Kane. 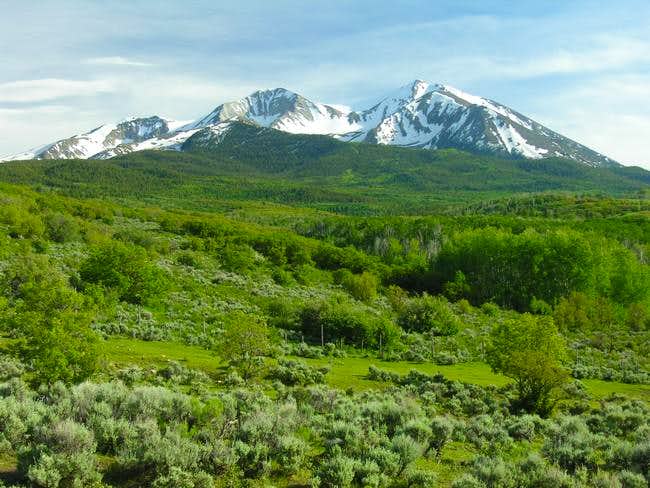 Mount Sopris is the striking northern sentinel of the Elk Mountains. It towers above the town of Carbondale and the Roaring Fork River Valley in a very dramatic fashion. Indeed the surrounding river drainages of the Roaring Fork and the Crystal River give Mount Sopris a vertical prominence few mountains in Colorado can match, rising over 6,000 feet in a few miles. This is impressive for a mountain that rises to the rather modest height of 12,953 feet. The sight of a sparkling white Mount Sopris raking the sky above the lush farm fields around Carbondale may be one of the more romantic images to be had in Colorado.

Mount Sopris has two summits. East Mount Sopris and West Mount Sopris are of equal height and are easily climbed together. The East summit is attained by the Mount Sopris Trail and is the more popular of the two. This configuration gives Mount Sopris a distinctive profile that is easily recognized from surrounding peaks.

Situated on the north end of the Elk Mountains Mount Sopris guards the more rugged heartland and serves as a beacon, being the first Elk Mountain summit to be seen when approaching the Elks from the north on Highway 82. It is included in the spectacular Maroon Bells-Snowmass Wilderness. This 180,962 acre preserve offers some protection for this area from the rampant development that has plagued Pitkin and Eagle counties in recent years. 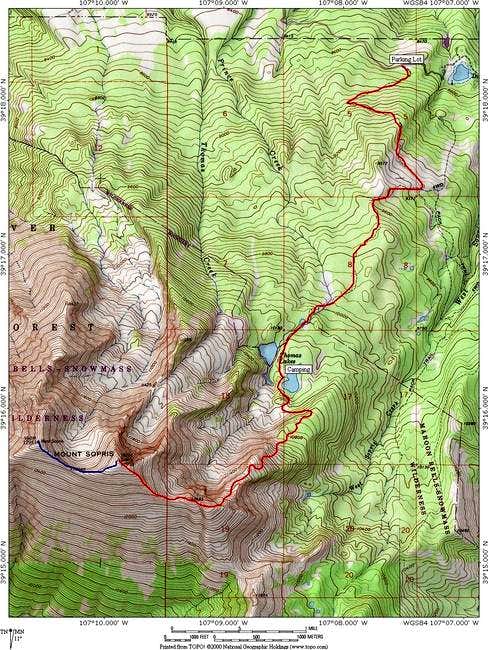 The Mount Sopris Trail is the easiest and most pragmatic way to get up Mount Sopris. It begins at the Dinkle Lake parking, follows a wide winding trail through aspen stands and over the glacial moraines that skirt the peak. The excellent trail reaches the Thomas Lakes in four miles. From here it is two and a half miles and 2,200 feet more to the summit. The trail gets smaller as it passes timberline before heading up the steep and loose north-east ridge of Sopris to the first false summit. This is the only tedious terrain on the standard route and if snow conditions are bad there could be an avalanche danger along this section. From the first false summit the trail follows a narrow grassy ridgeline to the the second false summit. From here the summit cairn is visible. Continue to the top. There is no trail to the summit of West Mount Sopris but this adds just 0.7 miles and minimal additional elevation gain.

The trail is excellent and this is a highly recomended route. It is easy for an Elk but the views are no less spectacular then Sopris' more rugged bretheren. The multiple cirques that cut into the north side of the mountain are breathtakingly spectacular when viewed from above. They also harbor monsterous rock glaciers so a more direct route from Thomas Lakes would be inadvisable.

From I-70 go south on highway 82 towards Carbondale. At the Highway 133 intersection, head south on Highway 133, through the town of Carbondale and after about 2.5 miles you need to turn left (east) on Prince Creek Road. Follow this road for about 6.3 miles or so (it turns to dirt at about mile 2.8) until you come to a confusing intersection. Keep right to follow the road to Dinkle Lake. (there is a sign there now pointing the way). You will pass some private property driveways along the way keep driving. The parking area for the trailhead for Mount Sopris is at Dinkle Lake - about 2 miles from the confusing intersection.

The eastern route up Sopris takes you into the Maroon Bells-Snowmass Wilderness Area. Due to the high traffic in the area (it's gorgeous!) the USFS requires a permit, available at the Glenwood Springs ranger station.