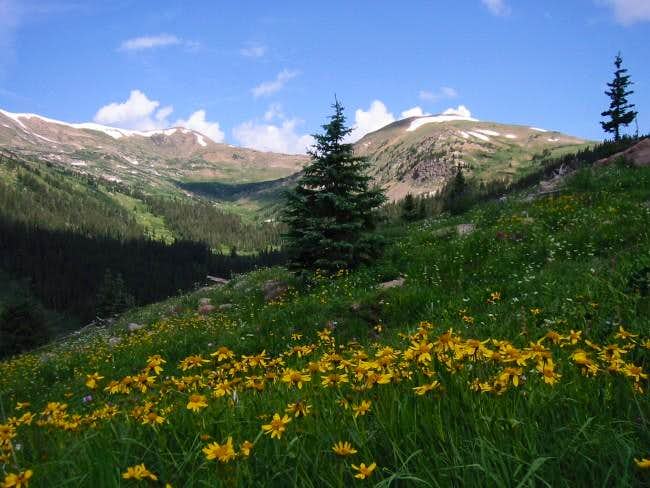 A patch of Coneflowers before the upper drainage of the West Fork of Clear Creek, seen from the slopes of Vasquez Peak.

The Vasquez Mountains are an indistinct subrange of Colorado's Front Range. Extending from Berthoud Pass and the Fraser River Valley on the east, to the Williams Fork River on the west, and then north to Bottle Peak, they are a small L shaped range. The summits of the Vasquez Mountains are generaly in the twelve thousand foot range. Although the terrain of these mountains consists of much rolling tundra; glaciation has carved some impressive cirques in the eastern aspects of many of the ridges and mountains in the area. The Vasquez Mountains are home to two of Colorado's wilderness areas: the Vasquez Peak Wilderness in the south and the Byers Peak Wilderness in the north. The intervening Fraser Experimental Forest lends a deep wilderness feel to these mountains as the forest seperates the summits from civilization with a thick blanket of Engleman Spruce and Lodgepole Pine. 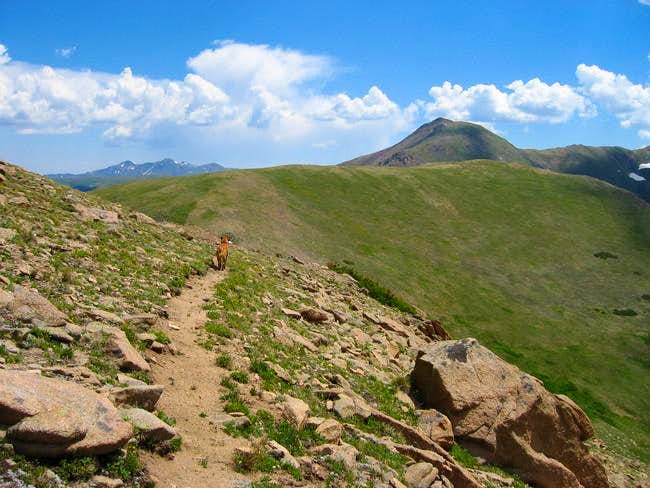 Vasquez Peak is the highpoint of the Vasquez Mountains. Its gentle summit sits astride the Continental Divide between Clear Creek County and Grand County. The name honors Louis Vasquez, a french trapper and hunter who explored this section of Colorado, and was one of the first European settlers of what would become Clear Creak County.

Vasquez Peak is most remarkable for the views it offers. From a sweeping vista of the Gore Range to an interesting view of Pettingell Peak and its attendent summits, to a vantage of the Grays and Torreys and the Evans Massif, to the gentle sweep of the James Peak Wilderness, to the jagged extent of the Indian Peaks rising toward Longs Peak; Vasquez Peak offers three hundred and sixty degrees of splendor.

Physicaly Vasquez Peak is a rounded mountain that is dificult to see from the nearby valleys. It rises over 500 feet from nearby Vasquez Pass and is higher then any of the surrounding summits; yet its prominence isn't apparent from below. On top of Vasquez Peak it is apparent that you are on the highest mountain in the vicinity. Vasquez Peak has a 12,900 ft tall sub-summit that is a fine companion peak for this mountain. The stroll between the sub-summit and the main summit is a fine place to stretch ones legs and see countless wildflowers during the summer months. Although alpine tundra and grasses cover the slopes the summit region itself does have a small rock outcrop. The geology of Vasquez Peak is typical of the Front Range; the mountian is composed of Idaho Spings Formation granites, schists, and gniesis; Colorado's basement rock hoisted high. It is part of a small anticline that makes up the Vasquez Mountains.

The section of the Continental Divide trail that skirts Vasquez Peak is one of more scenic sections of the trail the author has experienced. Indeed when I climbed Vasquez Peak my expectations were quite low. What could a little mountain so close to the noise and bustle of an extensive mine complex offer? It offers a subdued beauty that is that much more remarkable for its obscurity and proximity to the toil of civilization.

The Wildflowers of Vasquez Peak

Follow US-40 for 9.6 miles from the junction with I-70. Just before US-40 begins climbing toward Berthoud Pass there is a sharp turn with a sign for the Henderson Mine. Turn here and follow this road 1.75 miles to the Henderson Mine. Continue on a dirt road on the right side to a sizable parking area 0.5 miles further. Park. The dirt road continues on to the west towards Jones Pass. Several routes can be taken from here to ascend Vasquez Peak which lies almost directly north.

No Permits required. Avoid irking the Henderson Mine Company by blocking roads etc... The Henderson Mine provides the road and the parking for the trailheads. Try not to begrudge them as this is much more then many private or corporate entities are willing to do in Colorado.

This mountain could be ascended year round. The Henderson Mine road provides plowed access throughout the winter months. HOWEVER avalanche terrain is encountered above timbeline and should be avoided in the off seasons. A long ridge route following Vasquez Peak's west ridge may mitigate the danger somewhat but caution is suggested.

Car camping is a possibility along the Jones Pass Road. Backpacking camping spots are found along the Continental Divide Trail.