Jackson Peak is located in the Gros Ventre Range slightly east of Jackson, WY. It is not to be confused with its bigger brother sharing the same name in the Wind River Range. It rises directly above the National Elk Refuge north of the town of Jackson. Its pyramidal form is visible from almost anywhere in the Jackson Hole valley and is especially gorgeous when viewed from peaks in the Teton Range. An ascent of Jackson via a number of easy hiking and scramble routes is a rewarding experience in both summer and winter. In summer, it is fairly popular so don't expect too much solitude. Jackson Peak and Goodwin Lake lie in the Gros Ventre Wilderness of the Bridger-Teton National Forest. 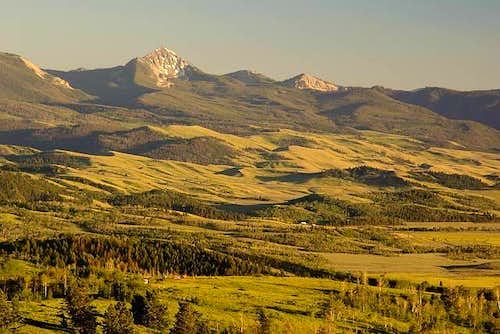 Getting There - Goodwin Lake Approach

Drive to the eastern edge of Jackson, WY on Broadway Ave and turn left on the National Elk Refuge road. Follow it 3.6 miles to a 90 degree left turn, then turn right at another 90 degree turn onto Curtis Canyon Road. Follow this road 4.2 miles to a fork (passing the Curtis Canyon Campground after 2.6 miles) as it switchbacks steeply up the hill. Veer right at this fork and after just another quarter mile, stay left at another fork to get onto Forest Road 30440. Continue one more mile at which point the road is gated and there is a trailhead with room for about 20 cars (elevation 8,115 feet). From here, follow the gorgeous trail as it weaves up to the crest of the long north ridge of Jackson Peak. At first the trail heads to the north, away from Jackson Peak but it will switchback to the south. It then follows the crest of the gentle ridge offering excellent views of the Tetons and is home to beautiful flower-filled meadows in summer. The trail then traverses left, leaving the ridge and cutting across the slope and reaches Goodwin Lake after a few miles. From the lake, continue southward up the trail and after a mile or so, the East Slope of Jackson Peak will be above you to the right.

In the winter, access to the Goodwin Lake TH is blocked by a winter wildlife range closure very low on the Elk Refuge road. The Jackson Peak Ski Cabin, however, provides an excellent mounting point for ski mountaineering endeavors on Jackson Peak, and other nearby terrain. Beware however, that finding the cabin is not straightforward in the winter (or summer). It would be best to talk to someone who is familiar with the terrain. The Bridger-Teton National Forest has a route they recommend which crosses a portion of the National Elk Refuge. To discuss this route, and to obtain a permit for the Ski Cabin, call (307) 739-5500.

The Cache Creek drainage to the south of the peak is also a very popular approach in the winter. No permits are required. To get to the Cache Creek TH, head east on Broadway Avenue from the town square in Jackson and turn right on Redmond Ave. After driving up a small hill, turn left on Cache Creek Drive Follow this road for about 1 mile to the TH. Leave the car and follow the broad Cache Creek drainage (up the old road) to the east. For the first few miles, touring conditions will be optimal as the drainage is groomed by a machine for cross-country skiers. There are a number of options from the Cache Creek drainage. Take Noker Mine Draw to access the southern ridge of Jackson or follow Cache Creek to its headwaters, turn south, and climb to the head of Sheep Creek to access the east face and Jackson Peak Ski Cabin.

From Goodwin Lake, continue south on the nice trail for about a mile. Once you reach an elevation of 9,950 feet, leave the trail and head right, in a northwest direction up the talus. It's an 800 foot ascent up fairly stable talus. If you prefer a less steep hike, you can continue up the trail to a small pass at 10,050 feet where a trail junction appears. Turn right and follow another trail about a third of a mile where it crests the south ridge of Jackson Peak at 10,350 feet. From here, leave the trail and hike up 400 feet north for half a mile to the summit. This adds roughly a mile in each direction but is a much mellower hike.

When the area is still snow covered, you can scramble directly up the entire north ridge. When the Goodwin Lake Trail leaves the ridge and traverses to Goodwin Lake, stay on the ridge crest all the way yo the summit. There will be a few rocky parts to scramble over but nothing harder than Class 2+.

The Elk Refuge road is closed at the 90 degree turn from December 1st - April 31st to protect winter wildlife range. Beyond that there are no permits or fees. Goodwin Lake is a very popular camping area with numerous sites. The Jackson Peak Ski Cabin presents a viable option as well. The best description of its location is in the head of the Sheep Creek drainage.

Summer is the usual time of ascent for Jackson Peak, and fall can provide excellent opportunities as well. Winter and spring ascents are common especially on skis. Ski mountaineering opportunies on every aspect of the peak (most notably the East Slopes and the North Face) are excellent, as are the opportunities on the surrounding peaks, ridges, and bowls of the Gros Ventre Range. The Elk Refuge Road opens May 1st, however much of the lower portion of the road has melted and making it as far as possible in your vehicle and walking, skiing, or snowshoeing from that point is still shorter than using the Cache Creek approach. This strategy is common through May and in mid to late November for quick day ascents/skis of Jackson Peak and fast access to the Ski Cabin. 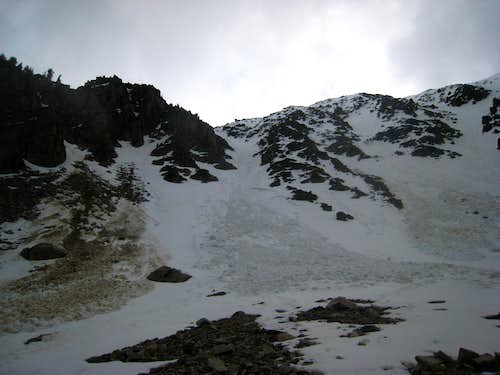 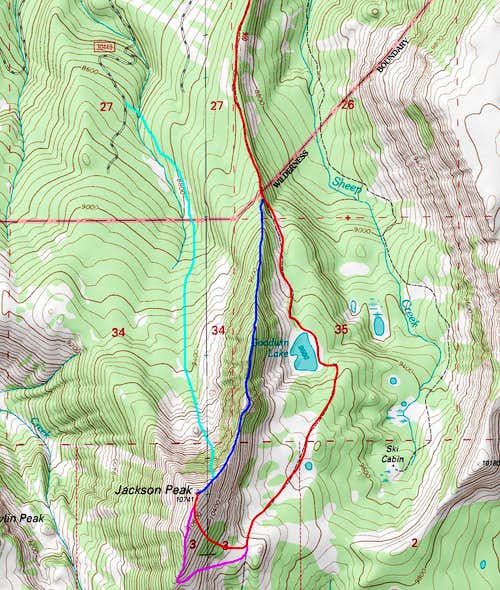