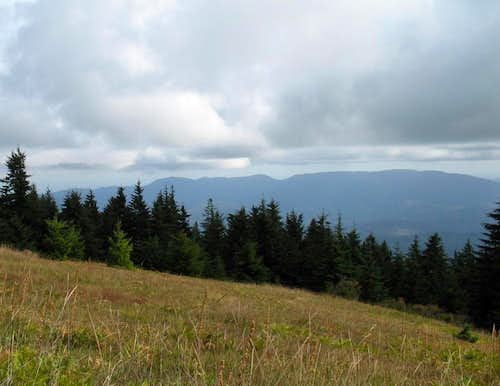 
I don't know about you but I am entertained sometimes by mountains that have names that seem to indicate that they aren't a mountain. Prairie Mountain is such a name (at least to me). In fact, it ranks right up there with the name Grass Mountain (3603feet) which isn't more than 20 airmiles away. At least Grass Mountain is a name that is a bit more fitting but the proximitiy to a mountain named Prairie is a little disconcerting. Grass Prairie Mountain would be an even better name or Prairie Grass Mountain but then I am taking this to the verge of silliness. Moving on, since both of these are so close to one another, it would seem to be a natural thing to do both of these mountains on the same day. Since both of these mountains have more than two thousand feet of prominence which is a lot considering that neither one of these mountains are more than 3600 feet of total elevation, Prairie is ranked at #47 while Grass is ranked at #57. They are indeed the prominent mountains of this area despite their lowly elevations.

Most likely the only reason you'd consider doing either one of these peaks is because you are chasing the Oregon Prominence peaks, of which there are 73. On a gray day in September, I picked off both of these peaks and totally enjoyed the experience.

Prairie Mountain and Grass Mountain face each other across a valley that is occupied by the Alsea river and the town of Alsea. It makes sense to get both of them while you are at one or the other since they are so close. In fact, check out the possibility of doing even more prominence peaks on the same day in the section on 4 in one day below.

Prairie Mountain has two Prairie peaks shown on the topo map but the eastern Prairie Peak is generally accepted to be  the highest point.  it may be twenty feet higher than the western Prairie peak (confusing isn't it that there are two spots called the same thing) but the recommendation is to visit them both if you are into prominence peakbagging just to be sure you got the highest spot.  Never know what future surveyors could do and it isn't worth skipping one of  them after you've made the long trip to get here.

From the north via Alsea and highway 34:
From I-5, find your way to Philomath Oregon. Highway 34 goes southwest from Philomath (get gas if you are low) and it is 19 miles to the town of Alsea. In the middle of town, look for the Alsea-Deadwood road and turn south on it, going 4.5 miles to an unsigned paved road that takes off on the left side (east). Follow the paved road (narrow with occasional turnouts) for 1.9 miles where it ends and stay right at the fork which is just beyond where the pavement ends. Continue on for 1.5 miles and go right again where the road forks and stay on this for 3.5 miles following the obvious main road. You'll pass over unsigned Gunsight Pass as you proceed on. At 3.5 miles, you'll come to a big yellow gate which may be open or closed. If closed, park just outside the gate (below it) and hoof your way up the road. Most often the gate is closed so plan on that aspect. You'll have a round trip hike of about 4 1/2 miles with an elevation gain of less than a thousand feet if you have to walk it. If open, you can follow it to both of the high spots. 1.1 miles to the first high spot on the east side of the mountain and then another 1.1 miles from there to the high spot on the west side.

Remember to look at the Grass Mountain page for directions from the town of Alsea to access it.

Dennis Poulin did this mountain from the south and combined it with another prominence peak, Roman Nose. From the south, this is what Dennis had to say:

"I came in from the south, so here are those directions. Find Hwy 36 that connects Junction City to Florence on the coast. About 20 miles west of Junction City there is a signed road to the north for the town of Horton. Turn north here and proceed to Horton. Go through this little town and turn left on the little paved road at the end of time. Zero your odometer here. This road turns to a good gravel forest road at some point, but I don't remember where. Any 2WD vehicle should be able to get to the trailhead. At 1.4 miles go left and at 6.9 miles turn sharply left. Continue to 7.9 miles and stay right. Follow the road to mile 9.2 where there is s gated road on the left. There is also a big borrow pit here that provides lots of good parking."

From there, Dennis had to walk up the road to access both of the high spots on the ridgeline of Prairie Mountain. (see below section for more)

In  January of 2015, James Barlow posted a trip report on peakbagger. His comments about the mileage and the highpoint are worth reading and being aware of. 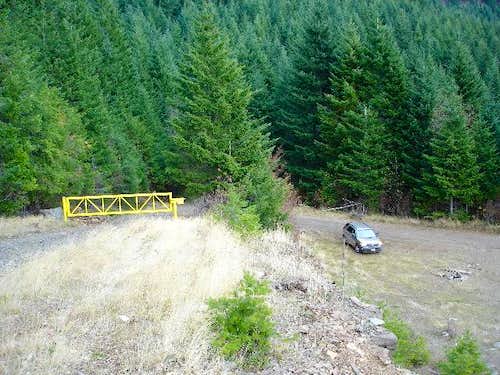 It is just a road walk to the two high points of around four miles or a drive should the gate be open. Most likely the gate will be closed so plan
on walking and spending about two hours on the effort. An easy hike but on a rainy day, it might feel longer than it is. Many have biked it. 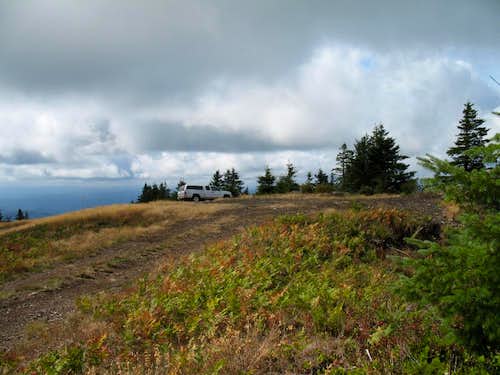 Western high point
From the gate: Walk up the road to the first area at the western end.
Then walk along the ridge road to the second high spot at the eastern spot beyond the towers.

Then return all the way back to your vehicle.
Stat's: 4+ miles 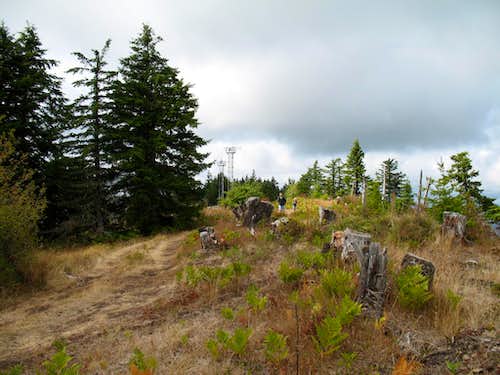 If the gate is open: Just drive the above. The high spot on the western end of the mountain's ridge is a drive up with perhaps a bit of walking around the area.
The second area on the eastern end has perhaps a 500 foot walk from where you can park your vehicle. Not much to it if you can drive it.

Dennis had this to say about his experience:
"The hike involves hiking up the road. There are 2 areas that are above 3,400 contour and you should visit them both. I think the one at the eastern end of Prairie Mountain is the highpoint. There is an old foundation near the highpoint, but there is a rock pile on the north ridge that seems to be a little higher. Walk around and see until you are sure you have visited all possible areas for the highpoint."

My own feeling is similar.  Go to the western Prairie Peak, park, walk around and hit what appears to be the highest ground.  Then go to the eastern one and continue walking east from the towers until you've hit any spot that might be the highest.  Considering the distance I had driven to get this one,  I wasn't leaving anything to chance.

Often times the gate leading up the road to the top is locked and you will need to hike from the gate area. No permits are needed.

You do need to be aware that some areas in the forest are still actively
logged and it is possible you might have to deal with logging truck traffic.
I would guess that the weekend might be the best time to do this mountain since the roads are narrow. I didn't see active logging when I visited in September 2006 but I was there on a saturday. I did see a few hunters near
appropriately named Gunsight Pass.

You most likely could find a spot in the nearby woods where you could camp but this is essentially a simple hike at worst and a faster drive up at best.
Mary's Peak to the east has a campground. Information HERE. 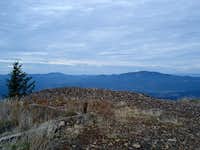 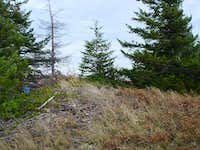 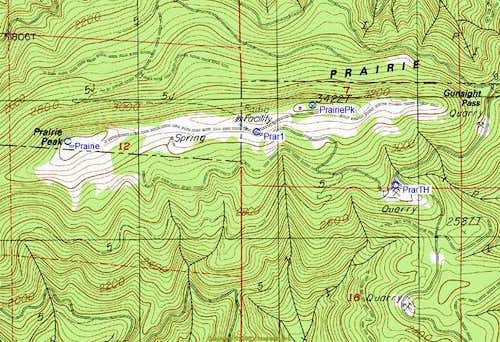 Four in one day?

Hmmmm, if you started early at either Mary's Peak or Roman Nose, you could possibly link all four of these together in a north to south or south to north link up. Grass Mountain would take the longest since it has a 6 mile hike involved but Mary's Peak and Roman Nose are close to being drive up's with Mary's Peak involving about a half mile of hiking and Roman Nose about the same. Prairie might not have an open gate but at the worst the scenario could look like this.

Let me know if anyone pulls this off. I'll list you here as a "honored 4 banger"

From Wikipedia, the free encyclopedia
Jump to: navigation, search

Alsea is an unincorporated community in Benton County, Oregon, United States. It is located on Oregon Route 34 and the Alsea River.

Alsea was named for the Alsea River, whose name was a corruption of "Alsi" (also spelled "Ulseah" and "Alsiias") the name of a Native American tribe, now known as the Alsea, that lived at the mouth of the river. The Alsea area was settled by Europeans early as 1855, when the name "Alseya Settlement" appeared on the Surveyor General's map. Alsea post office was established in 1871. [1]

In the early 1850s settlers moved from the Willamette Valley into the Alsea area to take up Donation Land Claims. [1] While logging was once the primary industry in Alsea, it is now known as a place for fishing on Alsea River, particularly for steelhead. [2]

Alsea is home to the Hayden Bridge, a historic covered bridge listed on the National Register of Historic Places in 1979. [3]

Alsea is on the Benton County Scenic Loop, a scenic driving route. [4]