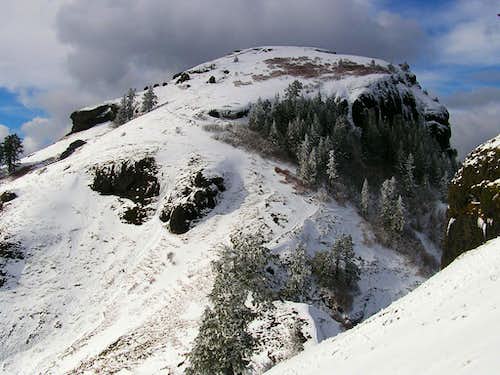 While not high compared to the Cascade peaks, this mountain is one of the highest peaks in the northern half of Oregon's Coast Range and the highest northwest of Portland. It is a very distinct landmark as you come over the pass on Highway 26 heading towards the coast with it's "Y"-shaped peaks of lumpy, pillow-shaped basalt. This apparently is typical of lava cooled quickly by water. This mountain was actually formed from lava erupted near Idaho that flowed into the ocean and was later pushed up when the Coast Range rose.

This is a popular climb in the summer especially in May and June when the flowers bloom. Supposed to be the best display in the Coast Range. It's open year-round though and is located in a state park.

There are some really cool features of this mountain including the summits and a large basalt dike which looks like an ancient wall of some huge stone building running up into the mountain. There is also an outcropping you can scramble up that is along the trail which gives the best viewpoints of the summits. The summit also gives really great views from the Pacific Ocean which is only about 10 to 15 miles away to Mts. St. Helens, Rainier, Adams, Hood and Jefferson in the Cascade Range. You can also see the Olympics far to the north on clear days. There are also some species of flowers that are only found on this mountain.

Normally, I would not submit a mountain this low in elevation but it has some really neat features and views that make it worthwhile in my opinion. It's a trail hike to the summit and it's a little over 2 and 1/2 miles to the summit with an elevation gain of about 1620 feet. It's also the Clatsop county highpoint. 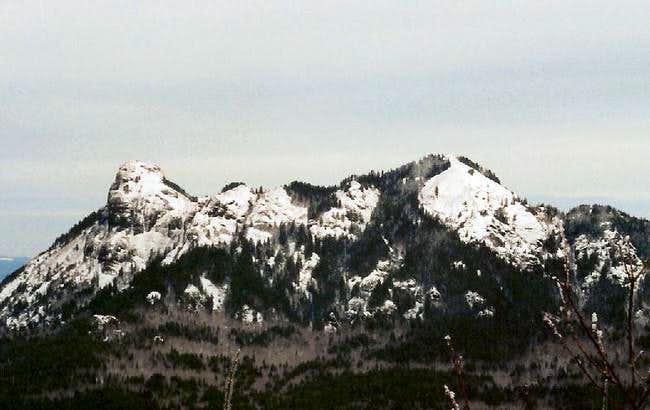 From Portland, take Highway 26 west for 66 miles to the Saddle Mountain State Park sign. Turn north onto the paved road for about 7 miles to the parking lot and trailhead. Mostly a neat drive but it goes past one clearcut area that is ugly. 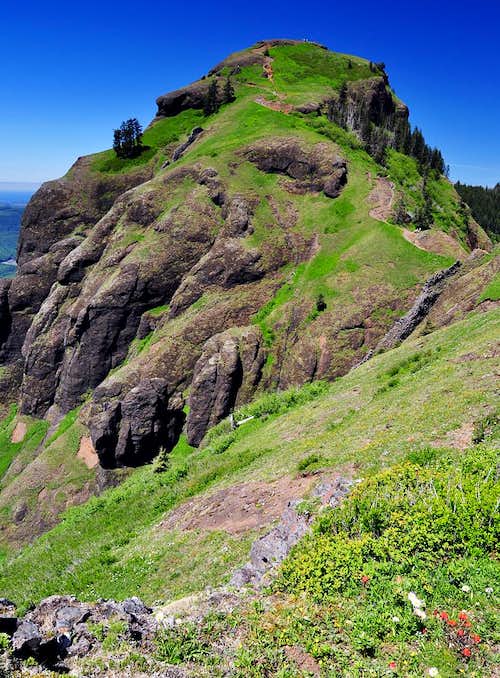 Open year-round and no fees or parking passes required. Only permit and fee you have is if you want to camp there.

Year-round but it's pretty rainy with frequent snow and ice in the winter. Take care in winter and be prepared for icy conditions. There are a few steep or exposed areas where trekking poles or even crampons would be helpful at times. I've started out in rain at the bottom and ended up on ice with snow blowing sideways even below the saddle.

Please be careful in exposed areas. There are some serious cliffs on this one, especially near the summit and at least one death has occurred here.

Really? I guess I have not been there in a couple years. That's depressing.

than one clear-cut nowdays...

Really? I guess I have not been there in a couple years. That's depressing.