Raven Ridge is one of the Bulger Peaks, also known as the Top 100 peaks of Washington State. Located in the Chelan Sawtooth Wilderness, it sits among other high peaks in the drier side of the Cascades. The peak can typically be accessed by late May and makes a great snow climb, along with other nearby peaks. The standard route takes the nice trail to Libby Lake, then ascends a very loose gully to gain the ridge, at which point, an easy scramble along the ridge brings one to the summit. This peak has some mystique that goes along with it regarding which peak is the highest. See below for more information regarding this issue.

At 8590 feet in elevation, it sits around the middle of the Bulger List and rises 1,130 feet above its connecting saddle with Star Peak, which actually cannot really be seen from from Raven Ridge since the true summit is off to the east from where the USGS maps label the highest point. Regardless, the views from the summit include Mount Bigelow to the south and Hoodoo Peak to the north. 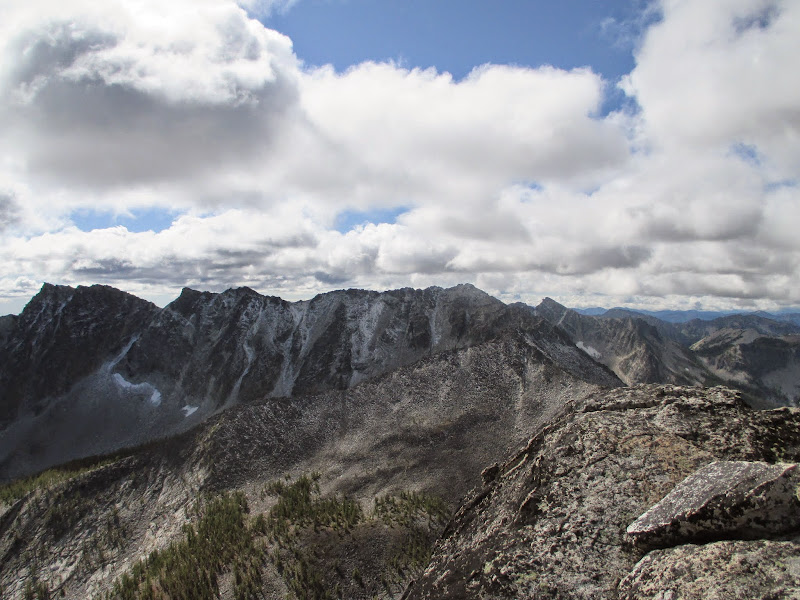 Raven Ridge (at the left) from Hoodoo Peak

From Wenatchee - Start by going east on Route 2/97 for two miles. Make a left (north) onto Highway 97 toward Okanogan and and stay on this road for 53 miles. Turn left onto WA-153 at the small town of Pateros and go 21 miles. Then turn left onto Libby Creek Road and go 2.5 miles at which point the pavement ends and veer left onto Black Pine Lake Road which will then turn into NF-43. Stay on this road for 3.5 miles. Make yet another slight left onto NF 4340 (good sign here) and go an additional 1.2 miles. Finally, turn right onto NF-700 and go one mile to a sign pointing to the Libby Lake Trailhead on the left side. Take that road all of the way to the trailhead. All these roads are gravel but are in excellent condition and are drivable in any car.

The standard route for this peak is from the north utilizing the Libby Lake Trail. From the trailhead (see above), hike the nice trail 5.5 miles to Libby Lake at 7,618 feet. This trail rises 3,185 feet from the trailhead elevation of 4,433 feet. The trail goes up quickly up with a number of nice switchbacks up to the gap between a smaller peak called Mission Peak and the ridge that leads to Libby Lake and Hoodoo Peak. From this gap, the trail flattens for a few minutes, then rounds around to the right of the broad northeast ridge of Hoodoo Peak at 5,600 feet. From here the trail climbs gently up the ridge for 400 feet, then begins a fairly level traverse along the southeast side of the ridge along the steep slope. This part will surely be in the sun in the morning. The trail then crosses to the east side of North Libby Creek at 5,950 feet and continues up the valley, then crosses it again at 6,400 feet.

At 7,200 feet, just past the Hoodoo Tarn (which was bone dry in October 2014), the trail reaches a small cabin which marks the most convenient spot to leave the trail for the south ridge route up Hoodoo Peak. For Raven Ridge, continue up the trail as it begins a steep 400 foot ascent up switchbacks to the lake. Round around to the southeast corner of the lake, crossing a small wooden structure in a large trench which appears to be a drain for the lake. From here, locate a broad steep gully that heads south and provides access through the cliffs above. This gully is loose, dangerous and not fun but it's only 900 feet up and with care, can be done safely. Begin ascending the talus cone for 200 feet to 7,800 feet where the gully narrows. This talus cone isn't too bad but be aware that some of the large boulders do roll around. Enter the gully, and try to stay on its left side, utilizing the solid rock wall as good handholds to aid in your progress up. The loose rock in the gully make for hard footing but using the rock wall to the left makes it much easier.

At 8,200 feet you should be able to climb out of the gully to the left, gain the rib and scramble up more solid rock to the ridge crest at 8,473 feet (Class 2+). From the crest, cross over to the south side a few feet and begin traversing east. In the past, the western summit (AKA "Libby") was thought to be the highest point as this is the peak that's labeled 8,580 on the USGS Martin Peak Quadrangle. However, the eastern summit, labeled 8,572 is the true high point of Raven Ridge, and the label on the USGS quad is incorrect.

Anyways, traverse the south side of the ridge east for about a half-mile and reach the summit block. You will have to drop to an 8,380 foot saddle just before ascending to the summit. The small peak just west of this saddle is known as "Corax" and can also be easily ascended if you want to put the extra effort. Once you have reached the summit block, you will at first think it's 4th or 5th class to top out on however a small tunnel under the large boulders on the southwest side can be crossed through and leads to a Class 3 scramble up the 20 feet to the highest boulder. One could also scramble up one of many other 4th class options. Peer down the north face for some exhilaration and note that the entire summit block sits perched out above the north face of the mountain!

To descend, retrace your steps back to Libby Lake. Be very careful to avoid knocking rocks down the gully on potential people below either in your own party or other parties. The gully is so loose though this almost seems impossible. Round trip elevation gain is about 4,200 feet with a total of about 13 miles. If you also add Hoodoo Peak to the day, it adds 1,300 feet of gain and 2 miles to the totals.

Another route that can be done to include both Hoodoo and Raven Ridge is to do the direct ridge traverse between both peaks. There are a couple spots on the traverse that provide some 4th class difficulties with intense exposure however experienced scramblers will be able to do the traverse without ropes. Be prepared for a lot of ups and downs though and plan for at least two hours to make the traverse.

For the more adventurous climbers, the direct ridge traverse between Raven Ridge and Hoodoo peak does go with minimal technical climbing. See the notes below provided by user kmccrohan:

"We did the traverse from Raven Ridge to Hoodoo. It is spectacularly fun, with one decently long section of exposed class 4 (definitely no-slip area) on the knife edged ridge. Additionally, if you are going from Raven to Hoodoo, you will encounter a 5.7 overhanging boulder problem partway through that may give shorter members trouble. I managed it in runnings shoes with a heel hook, but my shorter partner needed a boost. There is a rap sling above so if you are going the other way, 30 ft of cord is enough to rap the move. But you can also downclimb the move, which I did, because the handholds are so good. You might be able to avoid this problem by dropping lower on the west side of the ridge, but it looked very loose and less fun." 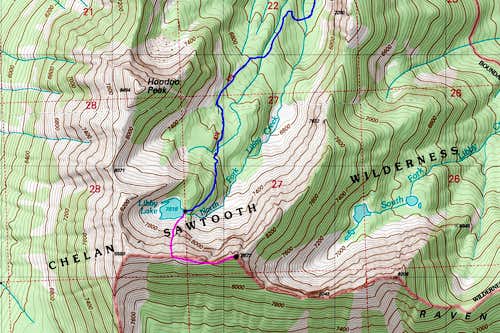 Raven Ridge can feasibly be climbed any time of year but the best time is from May to October. In May, the road to the trailhead may not be fully melted out so extra mileage may be required. Ice axe, snowshoes and warm clothing are certainly needed through mid-June due to the lingering snow. If the gully still holds snow, crampons are recommended as well. If the forest fires are running rampid, avoid the month of August. Late September and early October are by far the best time to climb due to the large amount of larch trees along the way shining a bright gold color.

No red tape. This trailhead doesn't require the NW Forest Pass. Motorized vehicles must stay on designated roads. Good camping spots are few and far between in the Libby Creek drainage and around Libby Creek. There is a nice meadow at about 7,250 feet a few hundred yards to the northwest of the small cabin along the trail at 7,200 feet. Nice camping can be found there surrounding a small tarn, known as Hoodoo Tarn. 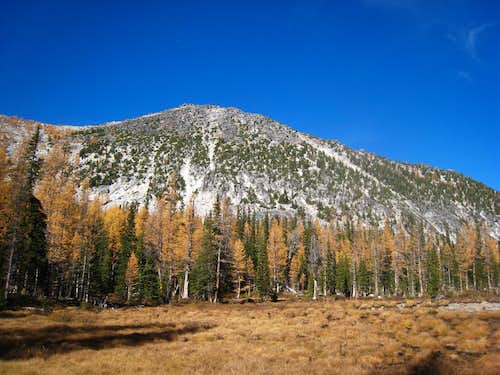 Good meadow for camping with Hoodoo Peak in the background

We did the traverse from Raven Ridge to Hoodoo. It is spectacularly fun, with one decently long section of exposed class 4 (definitely no-slip area) on the knife edged ridge. Additionally, if you are going from Raven to Hoodoo, you will encounter a 5.7 overhanging boulder problem partway through that may give shorter members trouble. I managed it in runnings shoes with a heel hook, but my shorter partner needed a boost. There is a rap sling above so if you are going the other way, 30 ft of cord is enough to rap the move. But you can also downclimb the move, which I did, because the handholds are so good. You might be able to avoid this problem by dropping lower on the west side of the ridge, but it looked very loose and less fun.

Re: Traverse to Hoodoo Peak

That is great to know! Thanks for posting.