Name: Sadovnikov vrh has its name by the nearby, already abandoned Sadovnik farm. Its German name is Sadonighöhe. The other Slovenian name is also Veliki (=Big) vrh, while the nearby eastern summit is called Mali (=Small) vrh.

Sadovnikov vrh is the highest elevation in the otherwise insignificant mountain ridge between the saddle of Pavličev vrh / Paulitschsattel on the west and Olševa summit on the east. Actually only Sadovnikov vrh, 1624 m, and Mali vrh, 1617 m, are more distinguished. They are rising close to each other in the western part, then towards the east all elevations are completely insignificant elevations in the broad, forrested ridge. In fact all the summits are overgrown with nice forrest, but the highest two are already high enough to have some clearings on top so that they offer some nice views around.

Interesting is also the rock structure of this ridge. While Olševa on the east is already built of some 200 million years old Triassic Dachstein limestone, all the summits in the ridge west of it are built of much older (at least 360 million years), paleozoic rocks. In the woods on the slopes and on the ridge we see everywhere water on the surface and on both summits there are rocks from Devonian coral reefs, similarly as for example on Stegovnik or Pristovški (Kärntner) Storžič above Jezersko resort.

Both summits are very lonesome. There are almost no paths on the very top of them, the old frontiers paths are already completely overgrown. Only in nice days you can meet there a lonesome visitor.

From both summits you have a surprisingly nice views around, even if from the distance they look completely overgrown. In the panorama the main role plays the rugged group of Kamnik and Savinja Alps on the south. Its northern walls are seen from such an angle that they are really nicely arranged in front of us. On the east is the separated Raduha, then closest to us are Ojstrica and Planjava, then the central part with all the highest summits all towards Kočna on the west. And in the distance the pyramid of Storžič is greeting us. We also see many summits of the long Karavanke range, especially the eastern ones. In its own sense interesting is the northern panorama, towards Železna Kapla / Eisenkappel and its surroundings.

Because they are partly forrested, both summits have somewhat different panoramas. If we want to see all around, we must visit both of them. From Sadovnikov vrh we see better towards the south, on Kamnik Alps. From Mali vrh the view towards south and east is completely free, while towards north we can freely see only from one place in the connecting ridge.

Southeast of the Sadovnikov vrh, there are meadows with the beautiful, very remote Covnik farm. It has a splendid view towards the south, on Kamnik and Savinja Alps.

The best trailhead to ascend both summits is the saddle of Pavličev vrh / Paulitschsattel, 1336 m. We actually save some distance by parking some 300 meters down from the saddle, on the Slovenian side. The second possible trailhead could be the Covnik farm on the SE, but it already lies at least 100 m lower. 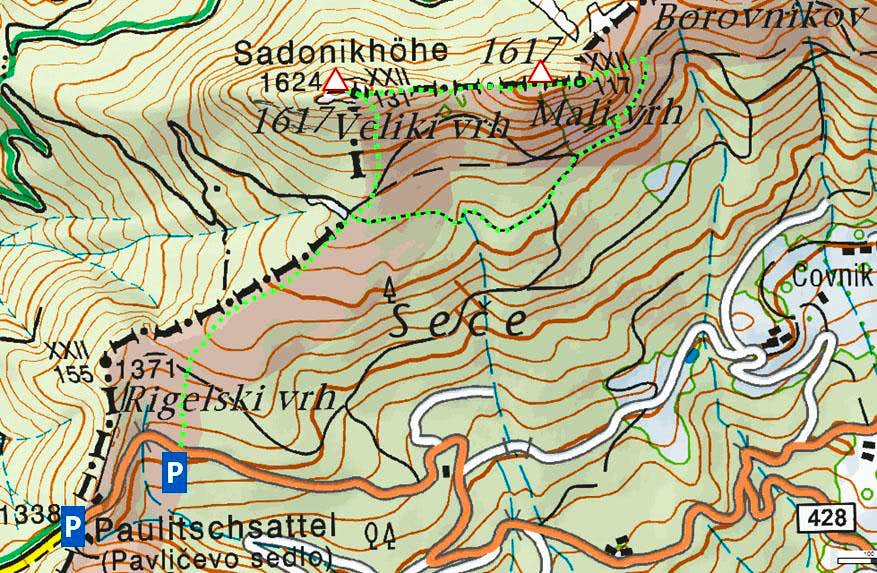 This is a short, but enough interesting pathless tour. For the ascent on Sadovnikov vrh only we need just 1 hour, for the whole crossing and return we count with 3 hours (with breaks). Because of pathless terrain and not just simple orientation the difficulty would be graded T3 (on the Swiss Hiking Scale). Gear: only good shoes and poles. Due to the rough terrain be careful not to twist ankle on the ridge! 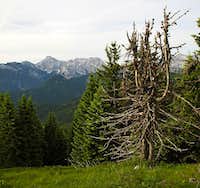 Description. From the nice parking place 300 m on the Slovenian territory, where big panos are explaining touristic characteristics of Solčavsko region, we cross the road and head by a tiny path directly northwards. We ascend a gentle forrested slope, the whole area is called Seče, which indicates a meadow with sour grass, appropriate only for horses; wetland. The path soon disappears, but you need just to continue up towards the main ridge and state border. In the vicinity of the ridge many cart roads lead us towards the NE. Below the last steep slope of Sadovnikov vrh forrest roads reach the ridge, but we follow the frontier cleaning and eventually ex frontiers path, going from one frontier stone to another, all the time towards north. The slope is steep and the trees around start disappearing only when we reach the summit ridge. The highest point is some 50 meters left (westwards), out of the main ridge.

To continue towards Mali vrh, we need to descend eastwards. Try to follow as much as possible the main ridge. So we steeply descend on the saddle between both summits and then in the same direction again ascend up. Also the ridge on Mali vrh is quite steep.

We can return by the approach route to the saddle and from there southwards till the first cart road. But it is more beautiful to continue by the main ridge further eastwards (or simply go by a steep southern slope southwards down). On the next broad saddle we hit another cart road, turn sharp right and around the southern slopes of Mali vrh return back.

There are no restrictions, even if the mountain rises on the border between Austria and Slovenia. Both states are members of European Union and the Schengen regime allows free movement of people. But have with you a personal document.

When on Sadovnikov vrh?

The most appropriate times are in snow-free seasons. In good conditions (hard enough snow) also a winter tour should be nice. But have in mind that in winter the road over Pavličev vrh / Paulitschsattel is not cleaned and is so closed.