I inherited this page from Misha in November 2011 and wanted to give my thanks to him for creating this page and giving me the chance to build on it.

Appropriately named Shastina, a diminutive of Shasta, Shastina is the immense subsidiary cone easily recognized in any view including the western flank of the much more massive Mount Shasta, the most voluminous volcano in the Cascade Range. Rising well over 12,000 feet from sea level and 9000 feet from the surrounding terrain, Shastina ranks as the third highest peak in the range behind only Mount Shasta and Mount Rainier. Despite its enormous size, Shastina is often overlooked among Cascade volcanoes due to the proximity of its larger neighbor. Though it is the result of only one of four major cone-building episodes since the enormous collapse and landslide of Shasta's ancestral cone 300,000 years ago, Shastina remains a superb destination.

Shastina makes an excellent warmup or training ground for those interested in their first visit to the Mount Shasta area. It can easily be completed as a side trip by those summiting Shasta via Cascade Gulch, but is often visited as a primary objective as well. Shastina offers visitors secluded high altitude camping, beautiful views, unique geological features, and skiing and mountaineering possibilities as well.

Composition, Topography, and Eruption History:
Shastina is a stratovolcano composed of silicic andesite flows and dacite plugs, and was formed early in the Holocene period (the past 11,500 years). Shastina developed primarily from 9700 to 9400 years ago, and is only marginally older than the Hotlum cone with forms the main summit of Mount Shasta. Rising over 6000 feet in the final three miles, Shastina's cone is capped by a large circular crater measuring 0.6 miles across. It is connected to Mount Shasta on the east by a 11,860 foot saddle, giving Shastina 470 feet of mean prominence. Shasta's longest glacier, the Whitney Glacier, follows the wide gully between Shastina and Shasta on the north side. The summit is marked by two small outcrops of nearly equal height capping a large plug inside the southern half of the crater.

Crater Lakes:
Shastina holds the distinction of possessing the highest visible lakes in the Cascade Volcanic Range, exceeded in elevation only by the subglacial lake buried under the ice cap on Mount Rainier. Covered by snow in early in the season, as summer progresses the three lakes in and around the crater appear like turquoise jewels in a barren landscape. Sission Lake (11,793 feet) sits at the Shasta/Shastina saddle, and the crater itself holds Clarence King Lake (11,755 feet) and a small unnamed lake south of the summit plug (11,980 feet).

Diller Canyon:
Diller Canyon is the gigantic gash on the western slope, formed by hot pyroclastic flows during Shastina's eruption history. The canyon is unique in being the largest such canyon in the Cascade Range (measured from top to bottom) and drops nearly 7000 feet over 4.5 miles. Early in the season the canyon makes for an excellent ski mountaineering destination.

Fulgurites:
Like Shasta and Green Butte, the summit of Shastina is covered with visible scars from lightning strikes, called fulgurites, but Shastina possesses more and better examples of these than its higher neighbor. These strikes typically appear as green scars on the rock. Strikes will also occasionally drill small holes or yield green or black obsidian 'tears' weeping out of the volcanic rock. 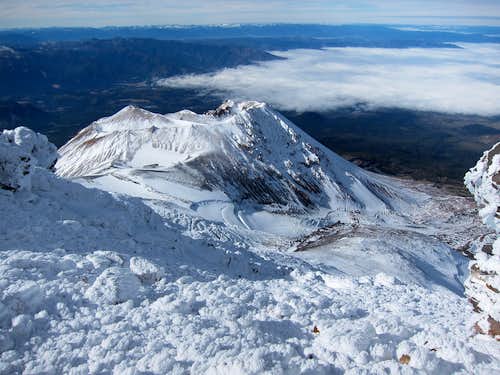 Shastina from The Sharktooth in late October 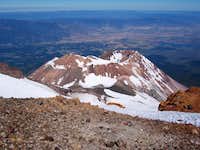 The majority of visitors to Shastina will ascend either Cascade Gulch or The Lightning Bolt, both of which are reached out of Bunny Flat via Hidden Valley. Shastina can also be climbed as a side trip from the Whitney Glacier route, but most climbers on the glacier will tend to focus on the summit of Shasta. Please note the attached route pages for details on the routes from the trailhead.

Both Cascade Gulch and The Lightning Bolt involve about 4 1/2 miles and 5400 feet of elevation gain to the summit of Shastina.

Bunny Flat (41.35379° N, 122.23327° W)
From Interstate 5 in Mount Shasta City take the central Mount Shasta exit onto West Lake Street and continue about a mile until it bears left and becomes N Washington Drive. The road soon turns into Everitt Memorial Highway and leads directly to Bunny Flat at elevation 6950 feet, 12 miles from the interstate. 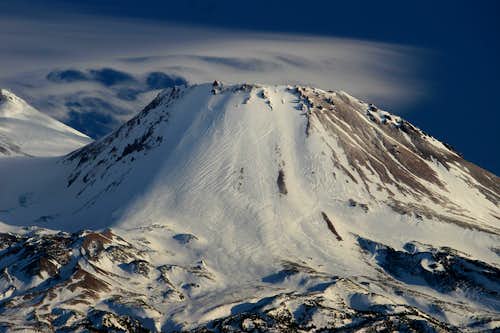 Shastina from the Haystack

Quotas:
There are NO quotas for climbs of Shastina or Mount Shasta from any trailhead. YAY!!!

Wilderness Permits:
In addition to a climbing pass, wilderness permits are required for any overnight stays in the wilderness and are most easily obtained 24/7, self issue at open trailheads or the Mount Shasta Ranger Station.

Human Waste Pack-out Bags:
Pack-out bags for human waste are REQUIRED and can be obtained free at open trailheads and the Mount Shasta Ranger Station. Please don't take shortcuts here, as the routes can experience heavy traffic throughout the course of the year and easily ruined for following parties. Pack out all solid waste. If you are concerned about the integrity of the packaging take an extra gallon-sized ziplock bag (recommended), a trash compactor bag (not necessary), or several doses of loperamide (not recommended!!!).

The best time to climb Shastina is from April through July when the mountain is covered with snow. Consolidated snow makes the ascent much easier than the tedious scree and talus encountered after the season. Much of the snow on Shastina will melt off before many of the routes on Mount Shasta, but a finger of snow usually remains on The Lightning Bolt well into the summer. Winter is also feasible due to the road to Bunny Flat being plowed (though not during or immediately after storms... call ahead). Take crampons and an ice axe with you throughout the climbing season and know how to use them, it gets pretty steep in some places (30-45 degree slope in the gully).

The two best places to camp en route to Shastina are Horse Camp and Hidden Valley.

Horse Camp has an alpine lodge built in 1923 and owned by The Sierra Club Foundation. Overnight stays cost $5 per tent and $3 per bivy when open for the season (late May through September). No overnight stays are permitted inside. The camp has fresh spring water (no need to filter) and toilets (not always open for business). See the Shasta Alpine Lodge at Horse Camp webpage from The Sierra Club Foundation for more information.

Hidden Valley is an excellent overnight location, and later in the season there are several good spots for camping off the snow. Often running water is available near the end of the valley. You may have the area to yourself unless there are groups climbing the West Face Gully on Shasta.

A final and less frequently used option is to camp near the Shastina crater. The great option is at the Shastina/Shasta saddle. There are excellent views here, but it is likely to be exposed to the wind. For shelter parties have dropped 120 feet down into the bowl containing Sisson Lake. It is flat and once the lake forms provides a good water source. It is a worthwhile experience, but the views in the bowl become more limited.