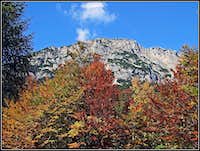 From the highest part of Dachstein massif, along Enns valley, a strong crest of lower mountains runs towards the east. At first summits are low and don't reach above timberline, but on the very eastern part there are three smaller massifs, which exceed 2000 meters of altitude. Being remote from other mountain groups means exceptional views from all of them. The first two, Stoderzinken and Kammspitze, rising above Groebming town, are nothing so very special, but the third one, Grimming, was due to its mighy posture, funny enough, some times in the distant past treated as the highest summit of Steiermark. Being almost 600 meters lower than Dachstein!

But back to our Stoderzinken! By all means it is a recommendable summit for special occasions. By this I mean when you have only little time, just a few hours, to enjoy a few minutes by its cute church in the middle of the south wall, and then jump quickly on its panoramic top. These are the two main characteristics, perhaps others can name some more. In winter also a ski tour from the summit is possible. The southern face of Stoderzinken is steep and rocky. More modest is the western ridge and the nortwestern slope, where in winter also a ski-lift operates. Towards the north, again rocks prevail, at least in the vicinity of summit. And finally, the eastern face is very rugged and rocky, falling deeply down into Grobmingbach gorge, which separates Stoderzinken from the massif of Kammspitz. Further towards the northwest and towards the north of Stoderzinken the high karst plateau named Kemetgebirge lies. 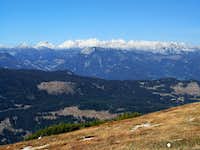 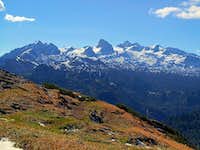 The summit panorama is really broad. On the west, Dachstain and its glaciers are shining. From the distant summits of Salzkammergut your eye will soon move more into the northeastern direction, where the whole massif of Totes Gebirge stretches. It is a bit remote, but in a nice day you can distinguish every higher summit of it, with Grosser Priel in the middle. Ennstal Alps on the east are also stil distinguishable. The whole southern horizon, across the valley of Enns, is packed with Niedere Tauern chain. Some of them are seen against the sun, but the view is nevertheless amazing. And finally, in the far southwestern distance, you can distinguish Hohe Tauern with Grossglockner itself. 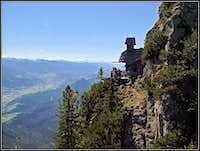 In some 20 minutes easy walk you can reach the cute church, a former hermitage, which from the altitude of 1898 m offers a beautiful view along and across the Enns valley. The scene with a small church, resting like a nest on a narrow, sunny band, is one of the most beautiful in the Eastern Alps. 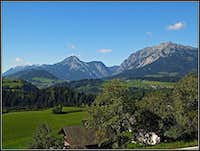 The nearest highways are Villach - Salzburg highway on the west and the Pyhrn highway on the east. From both the distance to Groebming is approximately the same, we drive by the valley of Enns. The third possibility to get in Groebming is from the south, from the valley of Mur river, over one of several passes over Niedere Tauern. The Soelk Pass road descends just into the town.

Reaching Groebming, 770 m, you must in the town centre (by the hotel, before the church) find the panoramic road up to Stoderzinken. It is well marked. In guidebooks it is said that you need to pay toll for the road, but in September 2007 I saw nobody to collect toll and also the station seemed to be abandoned. A narrow, but good mountain road is due to summer and winter tourism well maintained. It brings you over the southern slopes of Stoderzinken on the altitude of some 1800 m, where you can find big parking places. Very close is Gasthof Steinerhaus, 1829 m, where all ascents begin.

All other ascents on top are much longer. You can start the tour also in one of the valleys northeast of the summit. 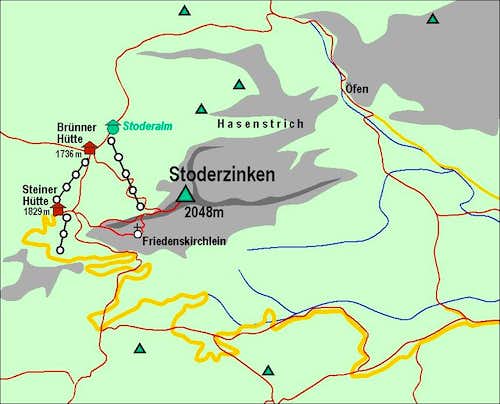 A self-made map of Stoderzinken

1. From Steinerhaus to Friedenskirchlein and on top. This is by all criteria the most beautiful ascent on Stoderzinken. From the tourist resort around Steinerhaus you can by several well marked and maintained paths reach the ridge area. From there a good path leads you across the southern slopes of Stoderzinken and soon you reach an interesting inscription mark (Wegkreuz). It has a closed small door, on which the following is written: "Lieber Wanderer, hemme Deinen Lauf und mache dieses Türl auf." In translation it would mean: "Dear hiker, restrain your run and open this door." Most hikers of course obey this request and open the small door of the box. What they find behind, will not be revealed here... After this amusing event you continue by the path, which soon enters a narrow band. White limestone walls are already everywhere above and below the band, but the path comfortably leads you on, crosses a shallow ravine and reaches the beautiful Friedenskirchlein.

From the church directly on top there is only one option. It is the so called Florasteig (Flora Route). Just after the church it is narrow and even a bit exposed, on one place also secured with a steel cable. Then it immediately turns up the rugged slope. You quickly gain altitude and soon the additional view on Dachstein opens. There you are already near the flat upper shoulder. Yopu soon reach the main ridge and in few minutes the summit. From Steinerhaus to Friedenskirchlein 20 minutes, further on top additional 20 minutes.

2. From Steinerhaus by the west ridge. If for some odd reason you don't want to visit Friedenskirchlein, you can keep all the time to the west ridge. This option is of course even shorter and a few minutes faster.

3. From Steinerhaus over Stoderalm. The northwestern slopes of Stoderzinken are only moderately steep. Below them, on the altitude of 1700 meters, lies a broad alpine meadow where also a mountain hut stands - Bruenner Huette, 1736 m. So, you can hike from the parking place and Steinerhaus first a bit down on alpine meadow and then by again well marked path over the northwestern slopes on top. 1 hour.

4. Stoderalm can also be reached by a marked path from the northeast, crossing the broad, forrested plateaus, which stretch there. These ascents are much longer. You can see a detailed map (1:50.000) on-line on: http://www.austrianmap.at/.

To ascend Stoderzinken, we don't need to sleep on the mountain. Still, in its close neighbourhood there are two official mountain huts:

Stoderzinken can be ascended any time of the year. Also in winter the road is cleaned due to the ski resort.