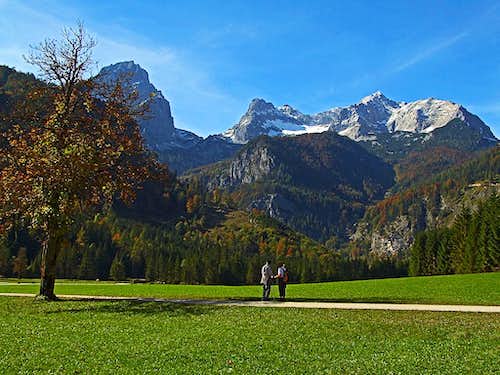 Grosser Priel from the SE, from Polstergut meadow

Totes Gebirge - The Dead Mountains - are one of the most distinguished mountain groups in the Northern Limestone Alps range. Sharp light grey summits are rising above broad karst plateaus, the nature is unspoiled, almost no roads penetrate the higher mountain regions. And Grosser Priel is the highest summit of Totes Gebirge. Going from the famous Dachstein by the long arch of Alps towards the NE, there is no higher summit than Grosser Priel. At the same time it is also the highest summit of Oberoesterreich province.

Focusing only on Grosser Priel we realise how complete mountain it is. It is true that it misses a big wall, which would enable longer hard climbs, but its rocky ridges and shorter walls enable a lot of shorter climbs. Also easy climbing and scrambling, the kind of endeavor for well trained hikers, is possible. The ridge tour from the quite remote Kleiner Priel, 2134 m, to the main summit is a long and rewarding tour, not just on the level of Jubilaeumsgrat on Zugspitze, but similar to it. From various sides the summit of Grosser Priel can be reached by marked hiking routes. None of them is short. If you want to ascend Grosser Priel in one day, count on almost 2000 meters of altitude difference!

The first documented ascent on Grosser Priel is the one on August 29th, 1817, done by Sigmund Graf with hunters Hans, Anton, Engelbert and Ferdinand Riedler. 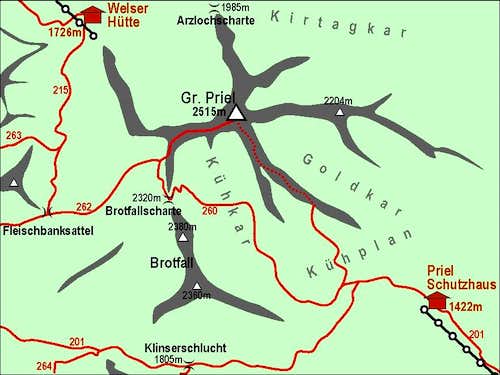 A self-made map of Grosser Priel

Where Grosser Priel rises, the main ridge of Totes Gebirge runs in the SW-NE direction. On the south the high mountain gorge of Klinserschlucht divides Grosser Priel from the beautiful, sharp rocky pyramid of Spitzmauer, 2442 m. In the ridge, rising from it towards the north, the first high summit is Brotfall, 2380 m, after Brotfallscharte (notch), some 2300 m, the broad ridge goes up to Priel fore-summit, cca 2500 m, from where the summit ridge goes towards the east on the main summit. From the main summit a strong rocky ridge descends towards the SE, finishing at some 1700 m on the broad slopes of Kuehplan. Between this ridge and Brotfall summit lies a high basin, called Kuehkar. Through it, and over Brotfallscharte, the SE approach from Hinterstoder and Priel Schutzhaus goes. Towards the north Grosser Priel has a high and broad, but not extremely steep face, falling some 700 meters down on Obere Ackergrube and then further down into Ackergraben and the upper Hetzau valley. Looking upwards, this face has its right (NW) and left (N) ridge, over both climbing routes go. From the main summit another side ridge goes down towards the east. This is the Kressenberg ridge. As said, on the east of the northern face, a less distinct north ridge descends down to Arzlochscharte, 1985 m. From there towards the east the main ridge of Totes Gebirge continues, finishing at last with the distinct Kleiner Priel, 2134 m. Towards this ridge, many valleys come from the north, but through them no marked path comes up. 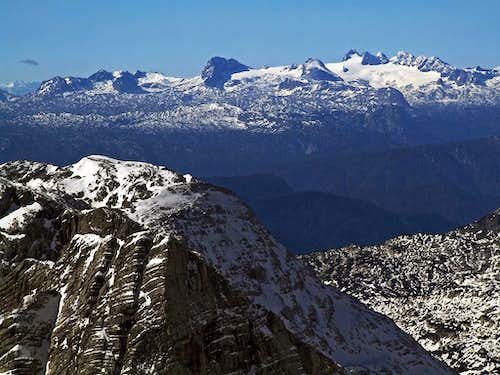 As already said, from the summit of Grosser Priel the panorama is really broad. The nearby summits of Totes Gebirge are all around, quite lower and from top less distinguished. On the SW the much higher massif of Hoher Dachstein is shining above its small glaciers. Towards the NW, N and NE in the distance, there are countless hills of Salzkammergut region and other mountain groups of Oberösterreich. Towards the east a few nice and high mountain groups can be distinguished: Haller Mauern, Gesaeuse, Hochschwab and others further on. And towards the south there are the chains of Niedere Tauern. Nice is also the view down into valleys: Stoder valley, almost 2000 m below on the SE and Hetzau valley, with its small lakes (Oedsee) on the NW. 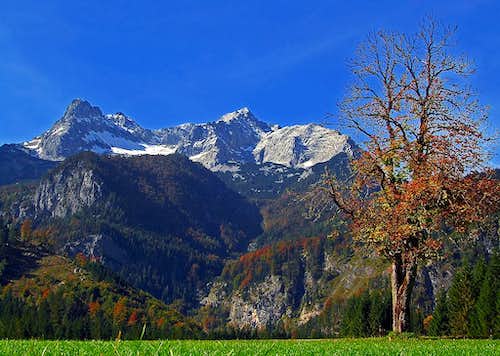 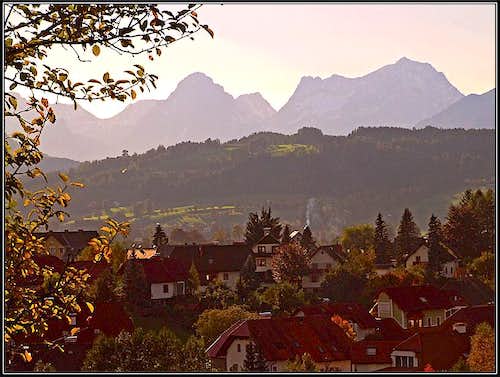 Grosser Priel is most often ascended from the SE, from Stodertal. From Pyhrn highway (A9), Hinterstoder can be reached by two roads. The first one goes towards the west from Windischgarsten, the other one towards the south from St. Pankraz.

Hinterstoder is a well known tourist resort, which has a season all year around. The trailhead for Grosser Priel starts just some 500 m out of the village, on the SW side. There is a big parking lot for hikers, who go further by marked paths, most of them to Priel Schutzhaus. The continuing mountain roads are closed for public traffic, which is wonderful, because nature stays unspoiled. A good idea is, to continue with mountain bike, towards Grosser Priel you can bike instead of the first one hour of walk.

The other trailhead lies on the NW of Grosser Priel. Hetzau valley is a side valley of Almtal. Just before Almsee a narrow mountain road deters across the creek and leads to Almtaler Haus, 714 m. I have no information about the status of this road and the continuing road into Hintere Hetzau. At the end of the valley there is the bottom station of material cable way for Welser Huette. All other approaches are much longer. With these I mean first of all the approaches from the west, which are used when traversing the whole Totes Gebirge massif. We can start the tour for example by Grundlsee or even by Altausseer See. 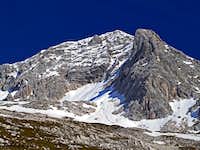 The summit and S ridge

1. From Hinterstoder. From the parking lot by Johannishof, 597 m, by mountain roads and paths to Polstergut farm, and further towards the W till the bottom station of Priel Schutzhaus material cable way, 634 m. Then over the valley step up to the hut, 1422 m. 3 h till here. From the hut 20 minutes more to the crossroads on 1560 m. There we have two options: 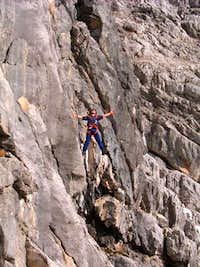 a) Bert-Rinesch Klettersteig (ferrata). A very hard (in Austrian gradation C-D), modern ferrata (from 1994), which follows the SE ridge to the top. 3 h from the hut.

b) Through Kuehkar and over Brotfallscharte to the fore-summit and by the narrow summit ridge on top. The normal route, protected on a few places below Brotfallscharte. 3 h from the hut.

2. From Almtalerhaus, 713 m. We continue towards the SE into Hintere Hetzau, continue from the end of the valley in the same direction to Welser Huette, 1815 m, then towards the south on Fleischbanksattel, 2122 m, where we turn sharp left. Over the moderately steep SW slopes to the fore-summit and by the narrow summit ridge on top. Also some 6 hours. Combining #1 and #2 means a very long one-day tour. We can ascend Grosser Priel from Hinterstoder, descend to Almtalerhaus, and finally return around the northern side of the massif (towards the east). On the return from Almtalerhaus this would mean additional 250 m of altitude.

3. The ascents from the west. All these options are too long for one day. They mean crossing the Totes Gebirge massif. In the first day we would reach Puehringerhuette, 1638 m, next day we would go on top and perhaps down by one of the two routes, described above.

Due to the long ascents, only a small percentage of all visiters do a one-day tour. Four official mountain huts are supporting ascents on Grosser Priel:

The summit of Grosser Priel can be best ascended in snow-free season. That means summer and autumn.

When Totes Gebirge is covered with snow, the massif becomes one of the best places for tour skiing. Its high plateau can be reached from many sides and all mountain huts have opened winter rooms. But ascents in winter and spring are harder. The fore-summit can be easilly reached also with skis, but the summit ridge is sharp enough that it requires winter equipment. Also the passage from Kuehkar to Brotfallscharte is steep and due to exposure the bands are protected on many places with steel cables. When under snow (or in early summer, when snow patches are hard) these passages may require a proper belaying and winter equipment. However, in soft snow the passage can be done also with only a hiking gear.