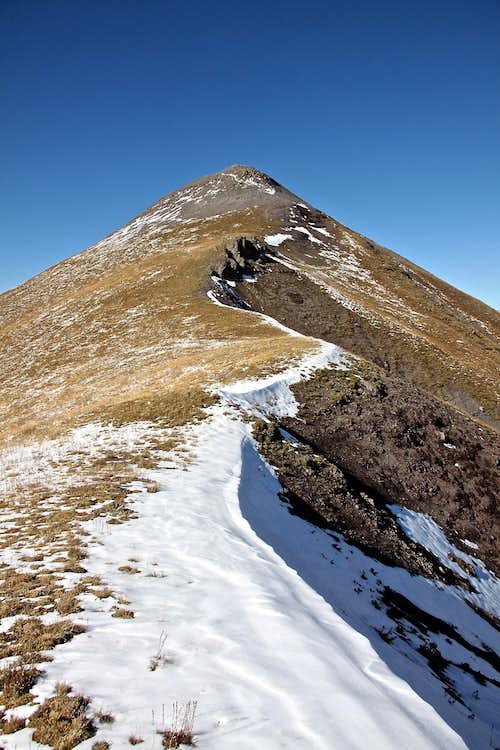 South Ridge up Jackass Point (from saddle with La Junta) 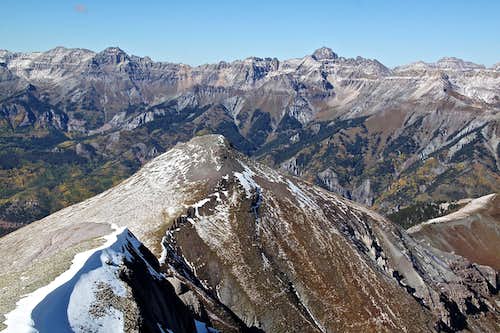 UN 13145 Jackass Point as seen from La Junta Peak
Unnamed 13145 is a ranked peak located near beautiful historic town of Telluride. The peak is also called "Jackass Point" and another name I came across was "Ballard's Horn", and List of John is also mentioning "No Name Peak". The peak is low per Colorado standards and most people will hike it in conjunction with other 13ers in the area. It can be access either from Bear Creek Trailhead starting in Telluride, or from hydro electric plant station above Bridal Veil Falls.
The peak combines really well with Wasatch Mountain, La Junta Peak and then you can either stop, or continue onto 12,804 foot Ballard Mountain.
Colorado Rank: 529
Parent Lineage: La Junta Peak
Saddle between La Junta and UN 13145 is 12,840 feet
Prominence 305 feet
Class: 2
Don Scarmuzzi in his Telluride Trails describes the hike from both Bear Creek or from Bridal Veil Basin. He calls Point 13,145 "Ballard's Horn".
Nearby Peaks:

From the town of Telluride, drive through the main street = Colorado Avenue through the town. Continue on the same road towards Bridal Veil Falls. The road becomes Black Bear Pass road. This road will climb through several switchbacks and then levels when approaching Hydro electric station above Bridal Veil Falls. 4WD vehicle recommended.
Trailhead Elevation: 10,380 feet 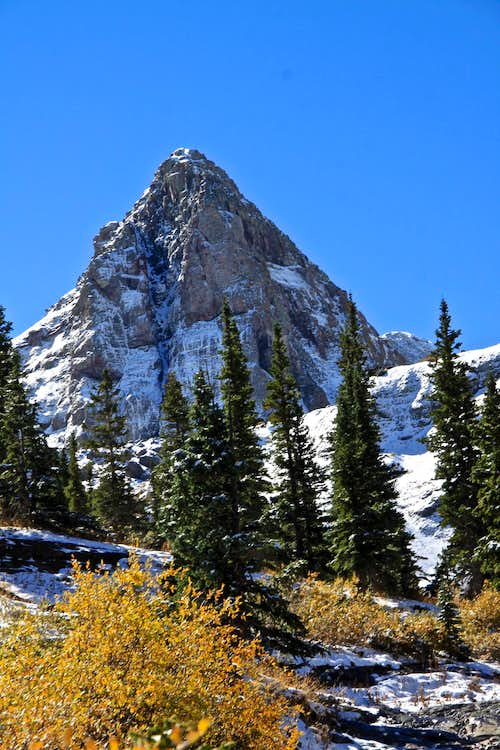 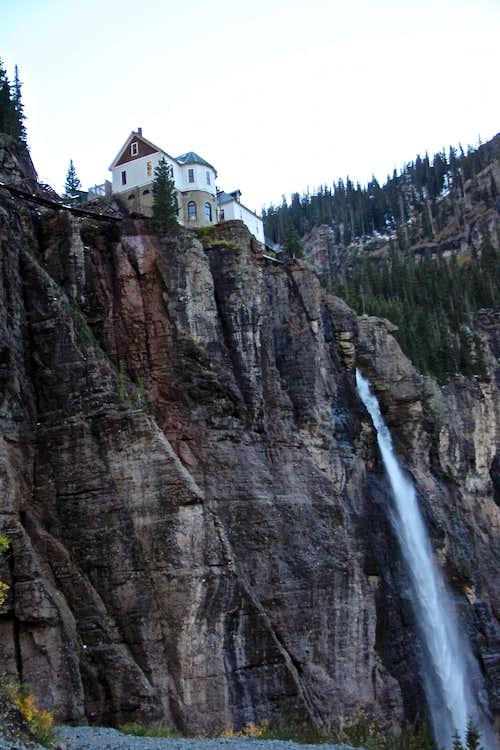 Bridal Veil Falls.
As any mountains there are different ways to get to its summit.
I came over La Junta Peak and ascended the south ridge. The route finding from La Junta Peak was very obvious, there was even a faint trail leading to its summit. Many people come over from the north side from Ballard Mountain. I avoided this route since there was a fresh snow fall and the northern slopes were covered with deep snow. (I had enough snow breaking after doing 3 13ers).
I descended back the south ridge to "Jackass Point" - La Junta Saddle at 12,840 feet and here slightly more on Jackass's Point side descended into Jackass basin. It was mostly steep tundra, which was slippery with a light blanket of snow. Lower down I encountered some thick willows, but was able to find my through. Jackass Basin has no lakes, but there is an old cabin, sort of falling apart at the entry into the basin. Jackass Basin per report is full of wildflowers during the summer.
I picked up a small trail by the cabin, which went through many switchbacks and eventually connected with a bigger trail leading to Silver Lake. Following this trail brought me to an old mining road and ~ 3/4 mile away from the parking area.
If you hike from Telluride: From the main street in town, turn south onto Pine and drive about 4 blocks south to the parking area for the Bear Creek Trail, which begins behind some condominiums. Parking is very limited here. Hike across the bridge up to Bear Creek canyon on a wide, old road. Continue walking for about 1.75 miles to an open area where you should see a trail heading off to the left and down to the creek. Cross the creek and get to the north edge of avalanche chute that tumbles down from La Junta Basin. Head up along the chute on a trail through numerous switchbacks. Eventually, break off from the main trail continues to Wasatch/La Junta saddle. You can also walks through tunda towards La Junta/Jackass saddle.

Summer is the easiest, but any time of the year is doable. Just remember that you will be traveling through an avalanche prone area - if venturing out in the winter check North San Juan Avalanche Forecast.

There is no good car camping along the road up Hydro electric station, perhaps the lower sections of the road.
Primitive back country camping is always an option if you choose to spend the night in the nature. There are plenty of tarns higher up in Bridal Veil basin offering excellent camping opportunities and amazing vistas.
Developed campgrounds are located along highway 141: Sunshine Campground.