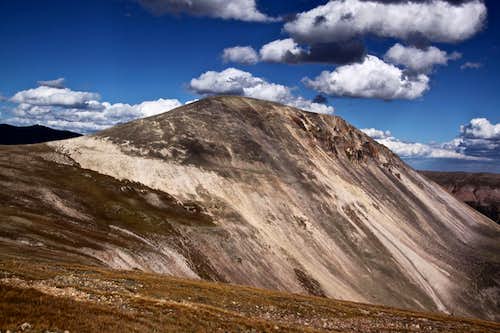 Greenhalgh Mountain as seen from the slopes of Sheep Mountain A
Greenhalgh Mountain is a low 13er located in the San Juan Mountain Range. It is easily accessible from 4WD road 520 - Rio Grande Road, just on the east side of Stony Pass. (This is a rough 4 WD road open from June to October). The mountain combines well with another ranked 13er - Sheep Mountain A. Both peaks are remote and not often hiked, expect peaceful solitude and great views an all directions.
Guide to the Colorado Mountains edited by Randy Jacobs with Robert M. Ormes briefly mentions that for Sheep Mountain and for Greenhalgh Mountain descend one mile east down from the Stony Pass. Ascend easy west slopes of Sheep Mountain, and then cross Sheep Mountain towards Greenhalgh. There are not many descriptions of this hikes on the internet, but it is not really needed. Both peaks are easily identified and route finding is obvious.
Continental Divide Trail and Colorado Trail cross the road just a little bit over 1/2 mile below the pass. Both are popular with hikers and great trails to walk.
The road to 12,588 foot Stony Pass provides access to the "Bend" area of the Continental Divide. If one checks the map of the Continental Divide Trail, it does make a big nearly U or V shape towards the west and then returns back. Canby Mountain sits right on the Continental Divide.
Colorado Rank: 463
Parent Lineage: Sheep Mountain
Class: 2
Nearby Mountains:
Canby Mountain: 13,478 feet, 2.5 miles
Sheep Mountain: 13,292 feet, 0.76 miles
"Stony Pass Peak": 13,165 feet, 2.7 miles
Pole Creek Mountain: 13,716 feet, 4.06 miles
King Solomon Mountain: 13,220 feet, 4.99 miles
Little Giant Peak: 13, 416 feet, 5.24 miles
Half Peak: 13,841 feet, 5.84 miles
Hunchback Mountain: 13,136 feet, 5.71 miles 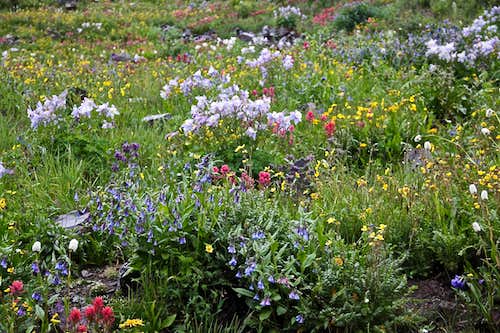 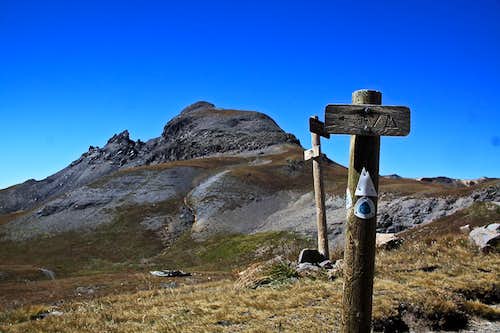 Stony Pass Peak and Continental Divide and Colorado Trail
Stony Pass is accessible from Silverton (shorter and much easier) and from Creede/Rio Grande reservoir (a really long road in a very bad shape as of 9/2015). I drove the road in both directions and was amazed in what condition we found it heading towards Creede (tough sections start way pass the turn off for Beartown). Lots of water damage, huge potholes (more than 40 cm deep) - I would not take my car again all the way to Creede this way. The road from Silverton however is nice, only narrow at places making passing vehicles in the opposite direction difficult.
High clearance 4WD vehicle is necessary.
From Silverton drive north east past the courthouse and veer right onto County Road 2. On some maps this road is marked as #110. Pavement ends after a couple of miles. Around 4.2 miles you reach Howardsville (mostly some mining buildings). Turn here onto FS Road 589 - it is signed for Stony Pass/Cunningham Gulch. Shortly you come to an intersection - one to the left is signed for Old Mine Tour, the other one close to the creek continues straight. It does not matter which one you choose, both reconnect after 1-2 miles, and neither is technically challenging. There is more traffic on the Old Mine Tour fork of the road. Soon, you have to leave Cunningham Gulch and start your climb up the Stony Pass - FS 737. It is again marked and hard to miss. The road will begin to degrade some and high clearance 4WD is needed here. The road is steep at some sections and exposed and at other sections making passing other vehicles difficult. Mid July to August there are amazing wildflowers.
Stony Pass is a popular destination with ATVs and other off road vehicles. You are standing at 12,590 feet without any physical work!
A small parking spot for hiking Green Mountain A/Greenhalgh Mountain is located on the north side of the road, about 1 mile east from the summit of Stony Pass. It is unsigned. There is a little campfire (no woods nearby - you need to bring your wood if planning a fire) at the parking lot and it is a good spot to spend a night if needed.
Continental Divide Trail and Colorado Trail are located just above this unsigned parking area - about a couple hundred meters higher. 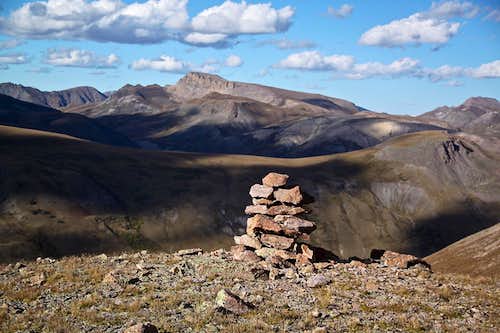 Saddle between Sheep and Greenhalgh Mountains 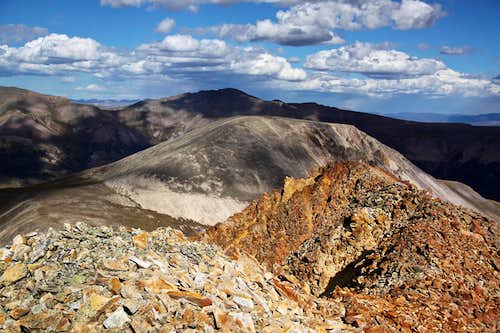 Summit views and along the hike

There are no fees to drive the 4WD road to Stony Pass, hike, or camp along the road. The area is pretty remote, but during the peak season expect a lot of ATVs and 4WD vehicles on the road. You will be passing popular hiking trails: Continental Divide Trail and Colorado Trail.
You can park/sleep/camp at a small parking lot just below Stony Pass (about a couple hundred meters below above mentioned trails). 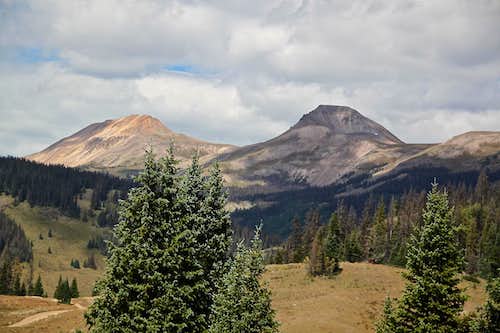 Sheep and Greenhalgh Mountains as seen from the road to Beartown

As mentioned above, the peak is very remote and hard to get to during the times when rough 4WD road is closed, which is from June to October. Travel during the winter adds extra mileage (at least 6 miles each way) and involves crossing avalanche dangerous area.

There is primitive camping available right at the trailhead, otherwise anywhere along the FS road 520.