X Mountain is an unofficially named peak with 600 feet of prominence, 4 miles west of the little town of Newhalem. John Roper has informed me that "X Mtn was originally called Cross-Dike Peak by the 7/28/1966 FA party for the intersecting white quartz veins in the summit rock forming an X. The name was later simplified to X Mtn". X shares a ridge with Trappers Peak to the southeast and Thornton Peak (shown as Old Damnation on some maps) and Mount Triumph to the northwest. The northeast face is characterized by a steep cliff dropping 1500 feet into the Triumph Glacier basin while the southwest slopes overlook the three scenic Thornton Lakes. 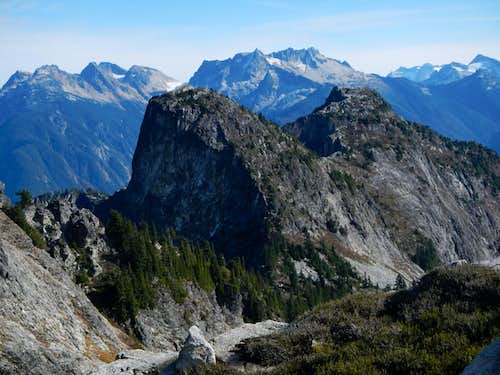 X Mountain and Trappers Peak seen from Thornton Peak
The only approach that makes sense for X Mountain is to follow the standard route to the summit of Trappers Peak and then traverse west by northwest along the ridge. The distance between Trappers and X is only a half mile. For most, Trappers is the main objective while X Mountain is sort of a bonus. One thing is certain; you'd be hard pressed to find a better viewpoint of Mount Triumph and the Triumph Glacier. The incredible Picket Range to the north and the lovely lakes down below to the south make this a truly stunning area to hike in. And, X is a little higher than Trappers.

Description of the route to Trappers Peak:

The trail starts off with a very gentle grade with a couple of creek crossings as you make your way through forest for 2.3 miles. Ascend steadily climbing switchbacks for the next couple of miles. The trail then begins to mellow out a bit as you traverse some alpine meadows chock full of blueberry bushes. Near the ridge top, watch for a boot path branching off to the right to Trappers Peak. The main trail goes left down to the campsites at the lake.

The trail down to the lake is a knee bashing descent of just over half a mile down to the only real obstacle you'll meet on the whole trail. There are some huge, down-sloping boulders and a log jam to negotiate before you can finally drop your pack at camp, 5.2 miles from the trailhead. 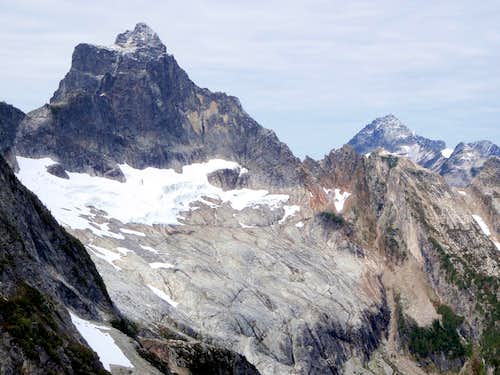 Mount Triumph And Mount Despair Seen From The Summit
The boot path to Trappers Peak ascends about 1000 feet along a beautiful ridge/blueberry buffet that offers beautiful views of the lakes, Triumph, Despair, Forbidden, Torment, the Pickets and everything in between. a few easy class 3 moves along a semi-knife-edge keep things interesting and before you know it, you're on top of Trappers.

From the summit of Trappers follow a faint boot path west for just under a tenth of a mile. This is evidence that many people get the idea of going to X Mountain. The path peters out where the ridge begins to get steep. It's likely that most folks turn around at this point. Admittedly, it does look bad, but if you find the right spot to scramble down the steep heather slope, it's not as hard as it looks. At the very beginning of the short scramble, it might be necessary to push past a couple of irritating tree branches. There's only about 25 vertical feet of steep heather and rock before it becomes easy again. This is the only spot that presents any challenge. If in doubt, take a look at the route photograph. Below the steep section it's merely a walk all the way to the summit.

Take Highway 20 eleven miles east of Marblemount or two miles west of Newhalem if you are coming from the east. Watch for the turnoff for Thornton Lakes Road on the north side of the highway. This road has a bad reputation because in the past it was very rough. Occasionally it gets re-graded and so might be passable in a 2WD depending on your luck, or skill at driving. Just exercise caution and watch for the occasional pothole. From the highway drive 5 miles to the end of the road and park at the Thornton Lakes trailhead. 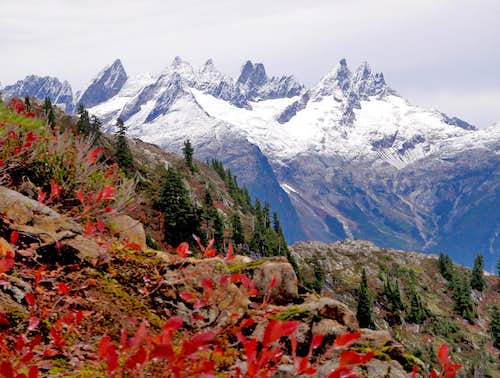 The Southern Pickets Seen From The Approach

A Northwest Forest Pass is required at the trailhead.