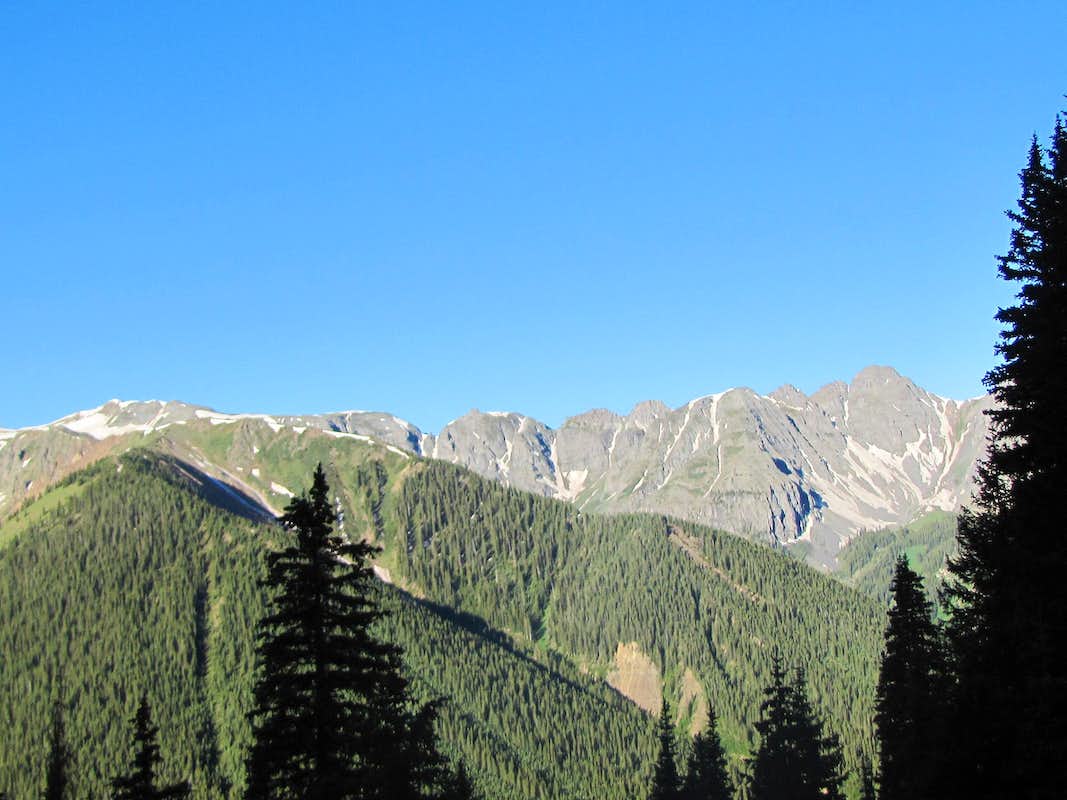 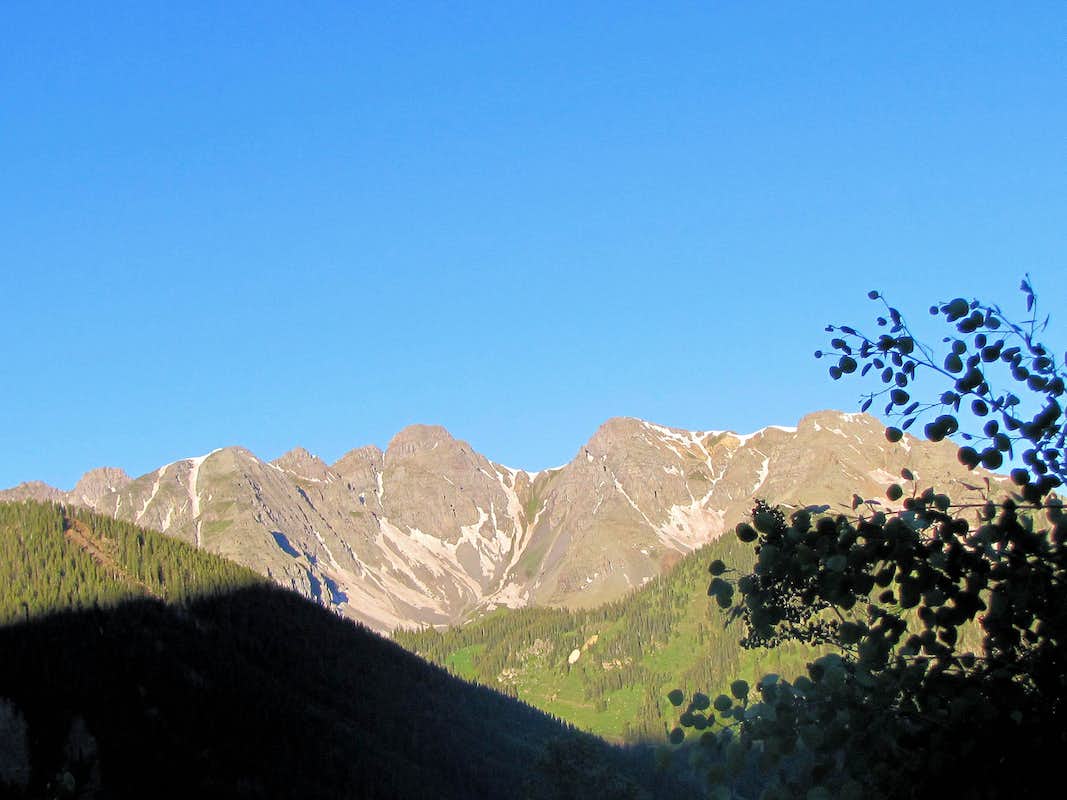 
Yellow Mountain is a 2.5 mile long ridgeline that rises near Lizard Head Pass in the San Juan Mountains of southwestern Colorado. The ridgeline runs northwest to southeast and gives rise to many high points/peaks. The highest point rises to 13177 ft and sits at the southeastern end of the ridgeline. This point is known as “Yellow Mountain South”. The point has only 200 ft of prominence and is therefore not a ranked peak. To the northwest, Point 12933 ft has more than 300 ft of prominence and is considered to be the summit of Yellow Mountain although it is lower.

Yellow Mountain is so called because of the autumn-time color of Aspen tree leaves on its southwestern face that rise above Trout Lake near Route 145. Trout Lake is famous for its view of the jagged peaks that surround it. These include: Pilot Knob (13738 ft), Golden Horn (13769 ft) and Vermilion Peak (13894 ft), to name a few.

Yellow Mountain South can be climbed from the north starting at the town of Ophir. You can follow a trail into the appropriately called Waterfall Creek Valley where you will sequentially go up into 3 different basins that are separated from each other by waterfalls. You will then reach the saddle between Yellow Mountain South and Pilot Knob where the summit can be accessed. 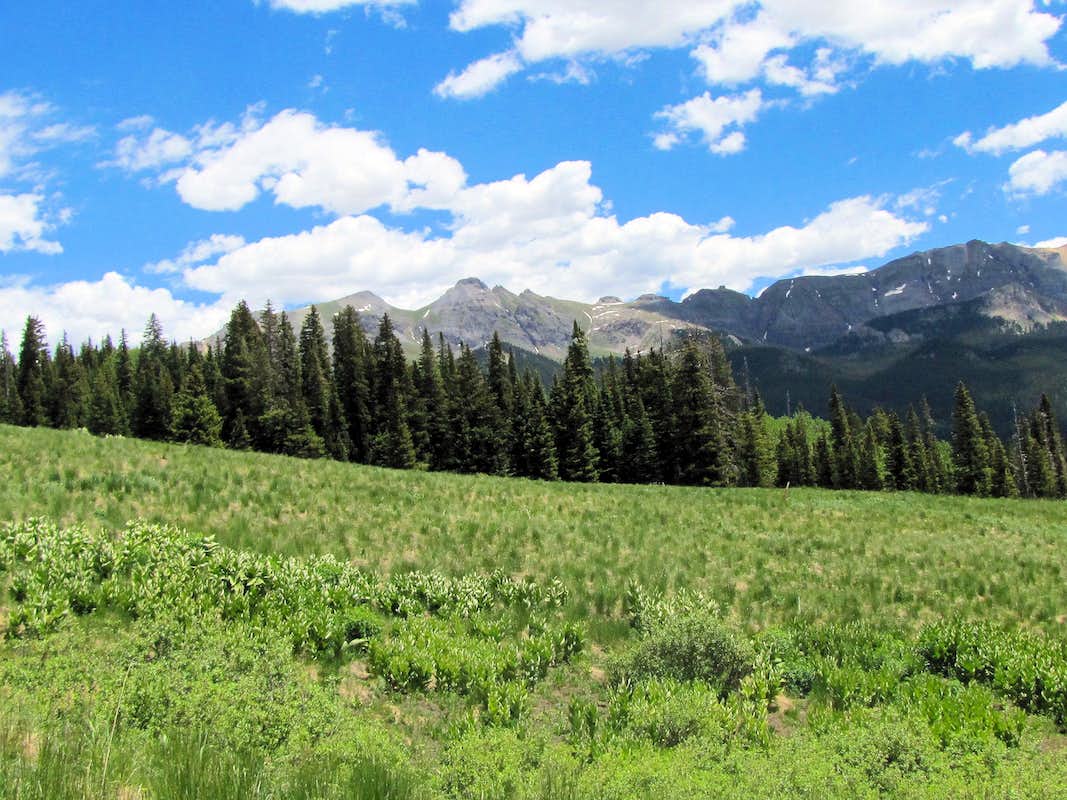 From Telluride, CO, drive on main street a few miles west to reach Route 145. Turn south onto 145 and drive roughly 7.5 miles to a hairpin turn. On the east side of 145, you will see an unsigned dirt road. Turn left (east) onto this road and drive a little more than 2 miles to the town of Ophir (this section of the road is well graded and is passable by most/any car). Ophir has a western and an eastern section. Go beyond the western section and park at the edge of the eastern section. You will see a stone memorial tablet to the Ute People at the start of the trail.

View of Waterfall Creek Valley and Peak 12933 ft from trailhead.

Follow an abandoned Jeep road down a little to reach the creek and cross it over a pedestrian bridge then follow the trail as it turns south and enters the Waterfall Creek Valley.

You are now in the first basin. The northern peaks of Yellow Mountain will be visible to the west.

The trail remains on the east side of the creek. As you near the southern end of the first basin, the trail begins to go up very steeply. A waterfall will come to view.

The trail goes through a rocky area. You can now look back to see the first basin below you and Silver Mountain across the valley.

You will then enter the second basin. Trees end although you are only at 11200 ft. The trail may not be visible here but you can easily hike parallel to the creek.

At the south end of this basin you will see two cliffs. A waterfall comes down between the two cliffs.

Hike south to reach the waterfall between the cliffs.

Go to the left (east) side of the cliffs and hike up the grassy slopes to enter the third basin. Looking back down into the second basin.

You can now look down at the waterfall between the cliffs pouring into the second basin.

The jagged summit of Pilot Knob will now be visible.

The summit of Yellow Mountain South will finally appear.

You can go to the saddle with Pilot Knob or walk up any path to the summit. I encountered a not too bad scree slope.

Views from the summit of Yellow Mountain South.