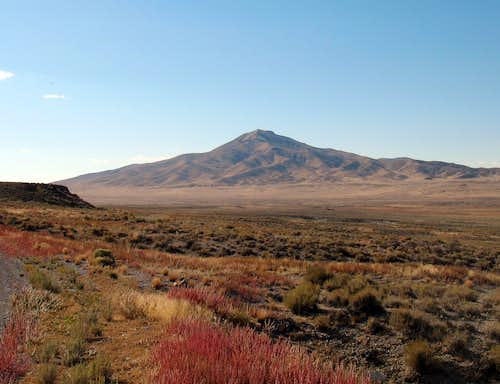 As seen from the north

A wonderfully isolated mountain, located in the Hogup mountain range west of the Great Salt Lake in the northwestern Utah desert that rarely see visitors. Even with this page, that most likely will continue since it is just too far off the beaten track to entice many to visit. The miles and miles of dirt roads, lack of signs and need to be in a sturdy high clearance vehicle with hopefully 4WD, eliminates many who might be just somewhat interested. Who might be interested in visiting this peak? Mainly those seeking after the prominence peaks of Utah, and there are a few of us. Having a prominence of 2317 feet, it ranks at #63 out of the top 100 Utah prominence peaks. (See this list)

Prominence is slowly gaining recognition as a reason to visit a peak and if you'd like to know about this area, peaklist.org is a good place to learn about it. Tangent Peak is not that far north of Desert Peak of the Newfoundland range and another truly isolated peak. The name Hogup was given to the range that Tangent peak is in by members of the 1849 Stansbury expedition and is taken
from the geology of the area. 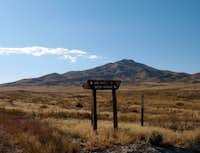 
There are two ways to access this peak. Neither one is friendly to passenger cars and I strongly suggest a high clearance vehicle with good tires and perhaps an extra spare. You need to be self sufficient and carry enough water for your needs as there is none to be found in this area once the snow is gone.

North approach
From Snowville just off of I-84, it is 57 miles to Big Pass. Gas up in Snowville and take highway 42 west (you can go on this road from the center of Snowville or from the exit off of I-84. It is about 17 miles to a junction with highway 30 which is signed for Park Valley and Elko. Turn onto highway 30 and drive close to ten miles (I'm not exact on this) but watch for milepost 65 as you want to turn onto a road that is signed for Kelton. Follow this road south towards Kelton, about 6 miles, and take the road heading to the west out of Kelton (Kelton is not a town, but where a town used to be). In three miles you will reach another junction and take the left fork which heads south towards Table and Crocodile Mountain. Watch for an arch on the right side of the road along the way. Just as you pass Crocodile Mountain, you will ascend a small hill and the road you want swings to the west and will go westerly for close to three miles before it swings to the south and heads for Big Pass. Three miles from Big Pass you will reach a fork with Big Pass signed for the left and Hogup signed for the right. This road had several rough spots but was at the time of our visit passable from the sign to Big Pass. I feel the north approach is the easier of the two. Considering that you have almost 27 miles of pavement (or half the distance from Snowville), that makes it a bit better although if you are coming from Salt Lake City, it is the longer way.
NOTE:
See the maps for the GPS waypoints and they really helped us on our effort to reach Big Pass.
South approach

Leave I-8- at exit 62 and head north towards Lakeside. Initially for the first 15 miles the road is paved and when a fork is encountered, with the left fork going into a military area, take the right. The road then becomes a dirt surface but a very good one. It is about 13.5 miles to where you will cross the RR tracks at Lakeside and begin to travel alongside the RR tracks for the next 12 or so miles. You will pass the Hogup pumping station and after doing so, keep an eye open for the Hogup RR structure, a couple miles beyond the pumping station. When you reach this, look for a road that goes off to the right. Take it and follow it for the next 17 miles to Big Pass. The key to this one is getting on the road that heads north and I will post a map that has a waypoint to aid you in this effort. We did notice that the RR seems to be working on the service road close to Lakeside
so weekends might be the best bet for traveling on that portion of this approach.
. 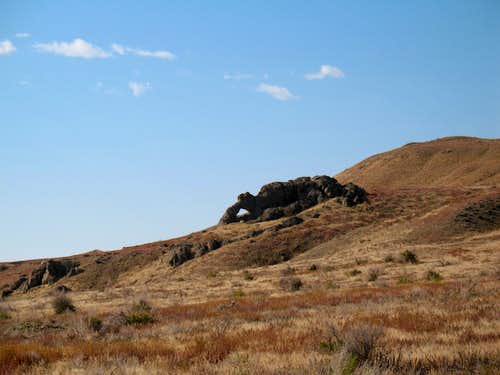 Arch that has the shape of a reptile

If you park at Big Pass, notice where the peak is and start walking. It is about two miles (a little less) and 1400 feet of elevation gain to get to the summit. No trail exists but you can determine the way up easy enough.
Sam Grant was kind enough to post his GPS track from Big Pass on peakbagger.com You can find it HERE. 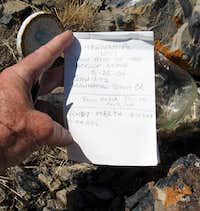 
On the summit you will find no central benchmark and two witness markers with the name "Terrace" on them. A register was present in a small cairn not far from the benchmark and had a few names in it. Very few were in the register since it was placed in 2004. Our visit was in 2009.

Here's what was in the register when we were there:

The names of those who visited after us can be found in peakbagger.com or in Lists of John. Both are great resources and maintain their own form of register which you can sign.

The views from the top of Tangent are expansive, you can see for miles and miles in any direction. Some of the pics below illustrate that fact and not all of the pics are mine. Thanks go to imontop and castlereagh for their contributions to the page. Please take the time to check out all the attached pics in the photo section.  Click on each pic to find the direction. 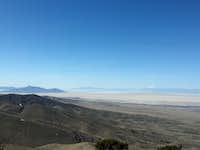 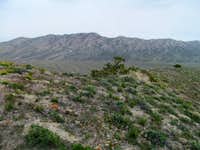 The only possible problem would be on the RR service road. As far as I know, no one has encountered a problem even though the road is posted as private as you cross the tracks on the southern approach. Be alert to trains so that you aren't surprised during your 12 mile drive along this service road.

The remainder of the roads are all on BLM land and as far as I can tell, there is no problem.

The BLM allows dispersed "no impact" camping and it would be possible to car camp at many spots along the way or just off the road at Big Pass but hardly ideal at that location..

A motel or two is available in Snowville and a nice forest service campground is tucked away at the eastern base of the Raft River Mountains (Bull Mountain)
called Clear Creek. There are 8 sites available and at this time it is a no fee campground. I've camped there a couple nights and found it a real value.
The vault toilet buildings (there were two of them) were spotless.