Baldy Alto is a high peak in the La Garita Wilderness in the San Juan Mountains in SW Colorado. This peak as well as its neighbors are characterized by having gentle broad slopes and it sits between centennials Stewart Peak and the 14er San Luis Peak. There are quite a bit of options you can use to ascend Baldy Alto all of which involve only class 1 and 2 hiking. In the summer, the views of the surrounding peaks are somewhat reminiscent of the hills in Scotland however here you are considerably higher. The entire area turns a bright green color when the summer tundra is out and there are many herds of wild elk that roam freely in these mountains. Most people who visit the La Garita Wilderness hike up San Luis Peak which is the only 14er around or they make the ascent of Stewart Peak however Baldy Alto lacks the Centennial status making it much less visited and solitude here is easy to find.

There are a couple options for getting to Baldy Alto and there are a few trails you could use to approach it. Keep in mind this peak lies in the heart of an isolated wilderness area and all trailheads require a long drive on a rough dirt road. This peak as well as all nearby peaks are a very, very long haul to get to in winter when the roads are covered in snow and impassible. Described below are the trailhead options and the different approaches/routes you can use for an ascent of Baldy Alto.

This is the most direct way to reach Baldy Alto and would also be the best trailhead to use if you wish to climb Baldy Alto and Stewart Peak. It lies at 11,020 feet and there are a few ways to get here, all of which involve many miles of driving on dirt roads. If you are coming from the north, head south on Colorado Highway 114 off US 50 (junction located 7.5 miles east of Gunnison). Stay on Highway 114 south for 20 miles and turn right onto Saguache County NN14 (BLM 3083) which follows Cochetopa Creek and go 7 miles on this road. Once you reach the south end of the Upper Dome Reservoir, turn right (south) onto Saguache County 2166 also referred to as the Cochetopa Road. This junction is signed for the Stewart Creek Trailhead. Begin measuring from this point and start by heading south on 2166 and stay straight (right) at mile 4.3. Enter the Gunnison National Forest at mile 6.9 where the road turns into FS 794. You will cross Pauline Creek after 11.3 miles and then cross Perfecto Creek at mile 13.8 both on metal culvert bridges. Turn right (west) after 14.1 miles to stay on FS 794. Cross Chavez Creek at mile 17.1 and reach the unsigned Nutras Creek Trailhead at mile 18.6. Nutras Creek is the next creek you cross after Chavez Creek and there are a few places to pull off the road and park. You will quickly begin to feel lonely here.

This approach has no official trail so be prepared for some moderate bushwhacking on this route. From the trailhead, locate a faint trail along the north side of Nutras Creek and follow it for 0.8 miles to the southwest through sparse forest. The creek is very broad and you may see numerous beaver ponds in the valley as you hike your first mile. Is isn't that uncommon to see a herd of elk or even a moose here. After about a mile the trail becomes less defined and you will likely lost it at some point. Follow the valley bottom avoiding any brush right along the creek for another 1.3 miles where you will find a side drainage coming in from the right at 11,600 feet. Stay left and follow Nutras Creek and cross this side stream. If you don't cross it and stay left you will end up ascending this side drainage and be taking a different route up Stewart Peak (which is shown on the map below). After crossing this side stream you are at the base of the east ridge of Stewart Peak at 11,800 feet. You can begin ascending this ridge if your goal is both peaks (Stewart/Baldy Alto Loop) or continue up the valley another mile, passing treeline and reaching the head of the creek at 12,600 feet. From here veer left and begin ascending talus to the southwest and reach the 13,160 foot saddle between Column Ridge and Baldy Alto. From this saddle turn left and ascend the ridge south, then southeast for 500 feet to the summit. There is a rarely signed register at the top. 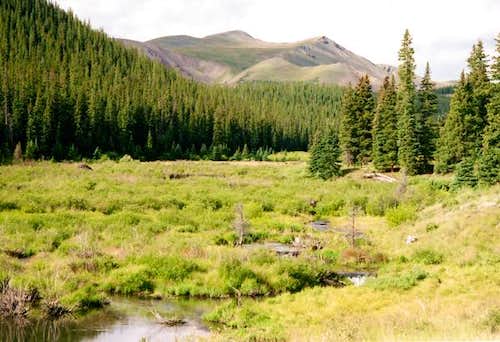 Looking up Nutras Creek where the road crosses

This route is a good alternative if you're interested in a longer ridge walk. Using the Nutras Creek approach described above, follow the north side of Nutras Creek to 11,320 feet where a small creek comes in from the left (south). Cross Nutras Creek here and head south up the slopes to the right of this small creek through sparse forest and taking advantage of a talus field. Continue until you reach the crest of the long east ridge of Baldy Alto at around 12,000 feet. Turn right and walk the ridge  for 2 miles to the summit. There are a couple small rock outcroppings to bypass on the north side of the crest but the difficulty should never exceed class 2 and it's mostly an easy walk. 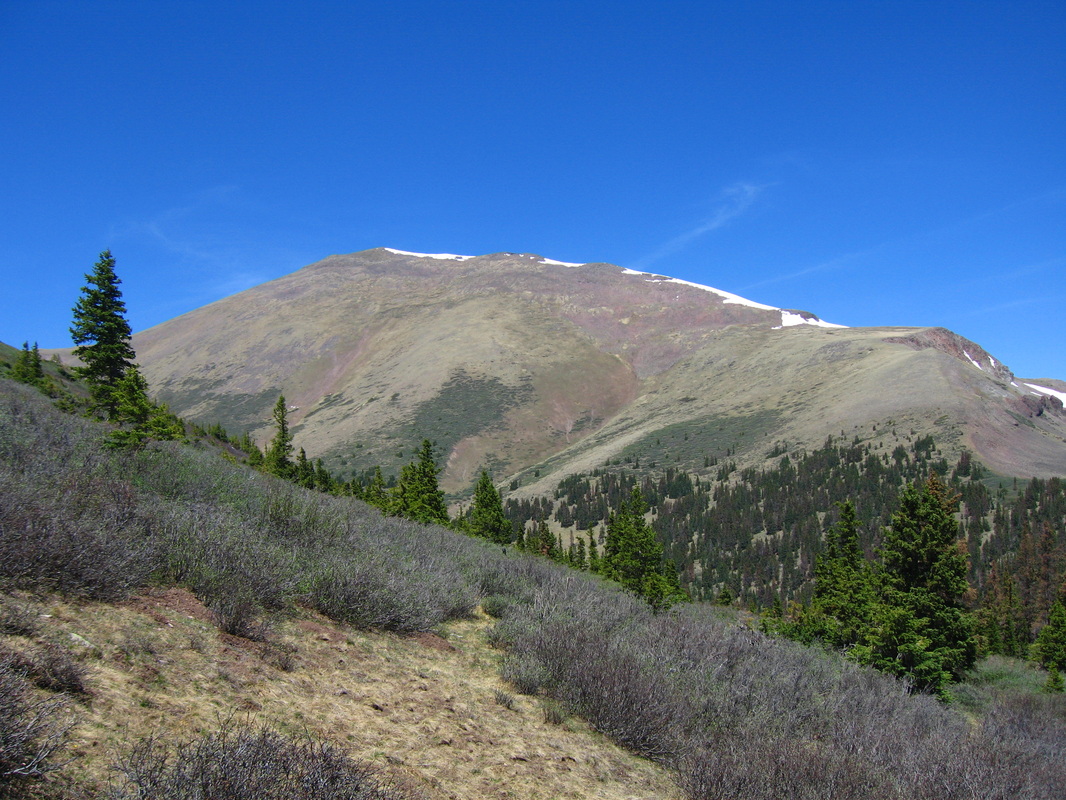 Get to this trailhead by continuing an additional 2.2 miles beyond the Nutras Creek Trailhead to the southeast on FS 794. This trailhead is lower at 10,480 feet but is also more popular as most people climbing San Luis Peak start here. Park at the signed parking area just south of the road before it crosses Stewart Creek. From the trailhead follow the well maintained Stewart Creek Trail west which stays on the north side of the creek for 4.1 miles to treeline at 12,000 feet. Here you will see two branches of Stewart Creek converging. The right branch heading southwest is taken for the standard route on San Luis Peak and the left branch heading southeast is taken for an ascent of Organ Mountain. For Baldy Alto you will take neither of these branches but instead turn right (north) and ascend 1200 feet up steep talus to the crest of Baldy Alto's east ridge. You should reach the ridge around 13,200 feet. Once on the ridge turn left and head west up the broad ridge for 500 feet to the summit. 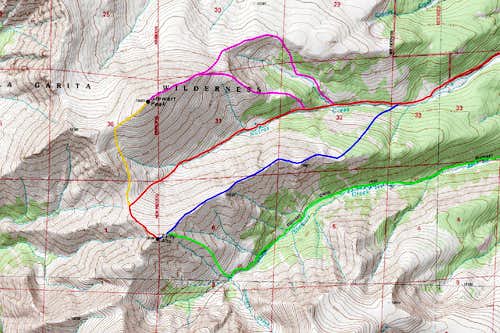 The rocks seen in the La Garita mountains are similar to the rocks seen throughout much of the San Juans which are distinctly different than the rest of Colorado. Most of Colorado's mountains are made up of Pre-Cambrian gneiss, schist and granite. However extensive Tertiary volcanics in southwestern Colorado driven by the Rio Grande Rift about 30 million years ago caused the deposition of volcanic deposits ranging from a few hundred to many thousands of feet thick. These volcanic tuff and lava flow deposits sit well above the Pre-Cambrian rocks like the ones seen in the Sawatch or Front Ranges. Unfortunately these rock types are terrible for climbing and large amounts of alteration and weathering have changed most of these rocks into a crumbly mess.

Basalt flows that cooled after an eruption form columnar basalt and these columns are seen all over the La Garitas. The largest volcano that existed during this time 30 million years ago was the La Garita caldera which is known to have erupted a few times with an intensity that was 10,000 times larger than the Mt. Saint Helens eruption in Washington state in 1980. The mountain that was associated with the La Garita caldera was at one point 20,000 feet above sea level. What remains today are the piles of volcanic rock that were deposited and later eroded into the current high points and valleys of the San Juans we see today.

Think about this though...ten thousand times larger then St. Helens. It's no wonder that the San Juans as a whole are so different. The whole area is covered in thousands of feet of volcanic debris that consolidated to form rock. Remnants of the La Garita caldera as well as others are seen in the area especially if one looks at aerial photos.

One of the most spectacular geologic areas in Colorado is the Wheeler Geologic Area. This area accessed using the East Bellows Trail and requires a good 4WD to get anywhere close to. The strange spires of colorful rock similar to what is seen in Utah at Bryce Canyon represent ash flow deposits that were deposited during the large volcanic eruptions 25-30 million years ago. When extensive falling ash came to the ground it mixed with areas of running water and mud and became an ash flow which deposited like a mud-flow in the topographic lows of the time.

After lithification and subsequent millions of years of weathering and leeching by water seepage, the tuff deposits turned to clay. Today all these deposits sit as bentonite clay like what is extensively seen in Utah. Be careful in this area when driving because an afternoon thunderstorm makes the area impossible to drive on and very hard to even walk on. Due to the alteration of all the volcanic rocks in the San Juan volcanic field there are many areas where great rock and mineral specimens can be found. If you are interested in a more extensive analysis of the geology of the area or other parts of Colorado send me a PM. I've been studying this and can tell you much more or answer any questions you may have about the geologic history. 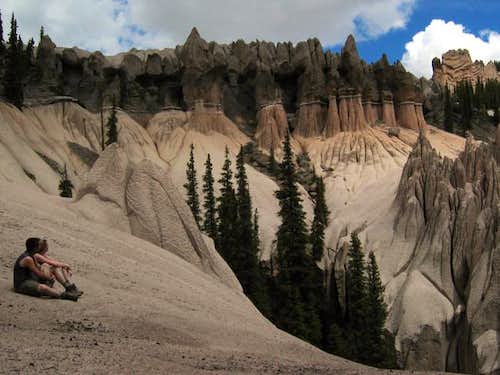 You can car camp at the trailheads since they lie within National Forest lands. The peaks lie within the La Garita Wilderness where wilderness restrictions apply. These include no motorized vehicles, no bikes, no pets, no chainsaws, no lawnmowers, no tractors, no trailers, no fires, no fire estinguishers, no airplanes, no seat belts, no assault rifles and no bombs! Only you and your pack. Feel free to overnight anywhere you want but try to avoid camping on the fragile alpine wildflowers. Baldy Alto can easily be ascended in a day so overnighting isn't usually done but through hikers on the COlorado trail frequently camp overnight in the area. 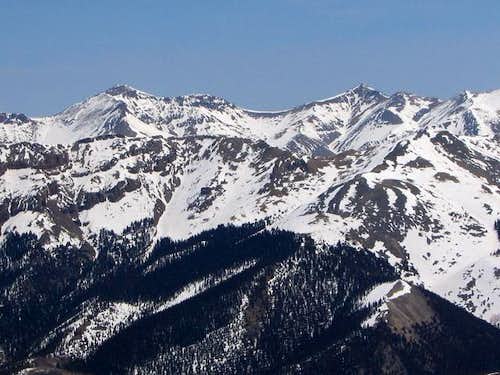 Stewart Peak and Baldy Alto from the summit of UN 13,510 in the spring 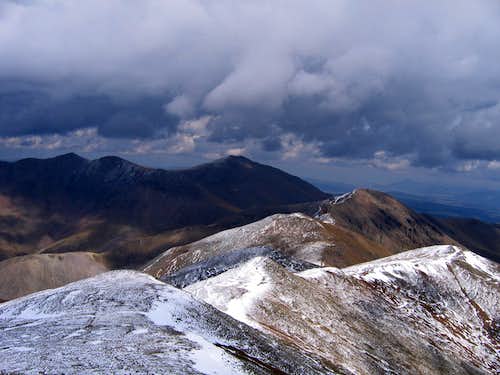 
Baldy Alto on Lists of John