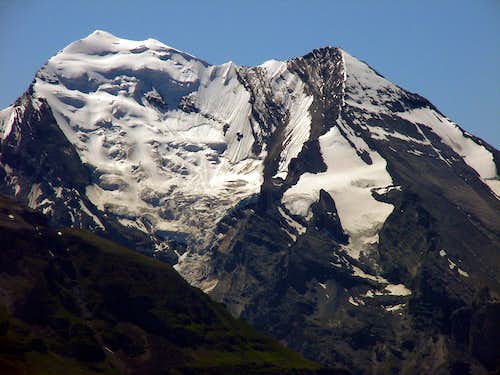 Setting from the SW

From the east. Gitzigrat is left skyline. 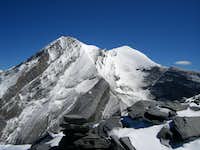 The Balmhorn is a large peak located above Lötschenpass and Gemmipass in the western Bernese Alps. The peak supports a large glacier on its north side. The eastern and northeastern aspects are rock. To the southeast, it is connected to the Rinderhorn by long snow and rock ridge (Zackengrat). To the west, it is connected to Altels by an elegant narrow ridge. Jakob and Melchior Anderegg with Frank, Horace, and Lucy Walker made the first ascent of the Balmhorn via the Zackengrat on 21 July 1864.

There are four major routes on the Balmhorn. 1) SW Ridge or Zackengrat, WS, This is the normal route and takes about 5 hours from Berghotel Schwarenbach. The ridge is gained by climbing the steep slope directly above the head of the Schwarz Glacier to Zackenpass. First Ascent: Jakob and Melchior Anderegg with Frank, Horace, and Lucy Walker on 21 July 1864.

2) North Face, S, 4 to 6 hours from the Balmhorn Hut. This is a long steep glacier climb with various options. The steepest way involves overcoming steep section varying from 60 to 90 degrees. First Ascent: Pierre Desaules and Edgar Seiler on 14 July 1935. 3) Northeast Ridge or Wildelsiggrat, ZS, 5 to 7 hours from the Balmhorn Hut. This ridge climbs steeply along the eastern side of the north face and is a combination of snow, ice, and rather poor rock with places of III. First Ascent: Hans Bichly, P. & A. Müller, and Herman Seiler on 12 July 1901.

4) Southeast Ridge or Gitzigrat, ZS+, about 6 hours from the Lötchenpass Hut. Mainly a rock climb in its lower parts with climbing of III and several places of IV. First Ascent: Heinrich Dübi, Christian & Hans Hari, and Louis Liechti on 29 July 1886. The North Face, Wildelsiggrat (with traverse to Altels), and the Gitzigrat are included in BERNER OBERLAND die 100 schönsten Touren by Hans Grossen with Gaston Rébuffat. 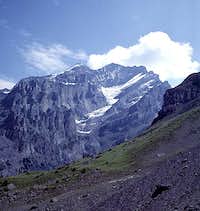