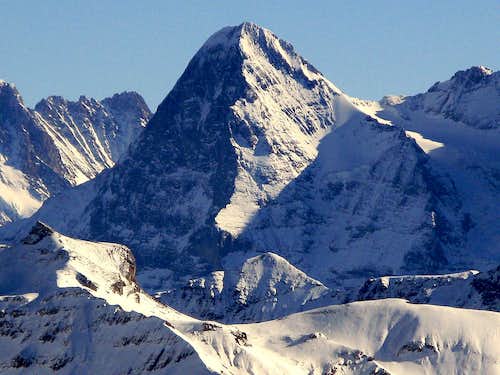 From the northwest. Photo by Cyrill

Because if its famous north face, the Eiger is one of the most famous and written about peaks in the world. The battle to climb this face has captivated the interest of climbers and non-climbers alike since the time of the first note worthy attempt in 1934. The Eiger is a striking peak from all sides and a worthy climb by any of its many routes, none of which are particularly easy. The easiest way to the summit is via the West Flank & West Ridge, which is a very complex route of about the same level of difficulty as the Hörnli Arête on the Matterhorn with rock pitches up to III and ice to 40 degrees. Charles Barrington with Christian Almer and Peter Bohren made the first ascent of the Eiger via the West Flank & West Ridge on 11 August 1858. See First Ascent of the Eiger for more details. Live cam of Eiger from Kleine Scheidegg: Eiger Cam These photos give a 360 degree trip around the moutain in a counter clockwise direction starting with the classic view of the N Face from near Kleine Scheidegg.

The Eiger is located in the Jungfrau Region of the Berner Oberland. It is normally reached from Interlaken via either Grindelwald or Lauterbrunnen. The starting points of all the routes can be reached by train from either of these towns. A mountain railway goes to Kleine Scheidegg via Alpiglen from Grindlewald and via Wengen from Lauterbrunnen. The famous Jungfrau Railway which accesses Eiger Glacier & Eismeer Stations and the Jungfraujoch starts at Kleine Scheidegg. TOPO MAP

The routes visible from the north are shown on an excellent photograph here: Eiger routes. This photo includes all the following routes except the South Ridge. The major routes on the Eiger are:

The West Flank and West Ridge of the Eiger.

The West Flank & West Ridge is the easiest route to the summit and the usual descent route for most parties. Route finding on the lower part of the flank can be very difficult, especially in descent if one has not gone up this way initially. Though not that technically difficult it is a big high alpine tour that can be especially serious in poor weather or conditions. Recommended equipment is an ice axe, crampons, 2 ice screws, 2 pitons (or nuts / cams) and 4 to 5 carabiners. There are fixed iron rods on the upper part of the route. Charles Barrington with Christian Almer and Peter Bohren, , made the first ascent of the West Flank & West Ridge on 11 August 1858 (also the first ascent of the peak). Below are a close up of the upper West Ridge and two photos on the route: 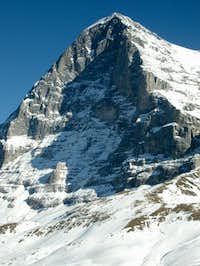 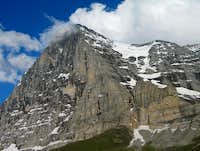 Since the first ascent of the face in 1938 there have been numerous new routes and variations on the face including many that end on the West Ridge or NE Face and even several Sport Climbing routes low on the face (Eiger NF routes). Still, most climbers seem to be most familiar with and aspire to the original classic 1938 route. But, note that in recent years much of the snow and the ice has melted back so that late in the season the face is often almost bare. See EIGER NORTH FACE, Successful Firsts for additional information. Below are several climbing shots on classic pitches of the 1938 route. SP members Zwerggaeuer and Bernhard Sauer have climbed the face. To see their photos all together, visit their profile pages. See also this album which includes a video by endy Eiger-2008 Also, see the album by endy of a 2015 ascent. 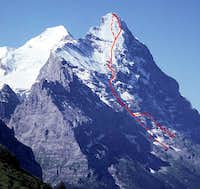 The Lauper Route takes an elegant line more or less directly up the Northeast Face. A short trip report in English with exceptional photos by Andreas Frank: Lauper Route Report & Photos Hans Lauper and Alfred Zücher with Alexander Graven and Joseph Knubel made the first ascent of the Northeast Face on 20 August 1932. 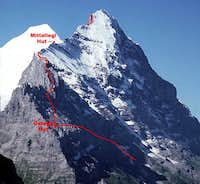 Mittellegi Ridge from the Northeast

Mittellegi Ridge from the Southeast

The long South Ridge is the second easiest route on the Eiger. George Edward Foster with Hans Baumann and Ulrich Rubi made the first ascent of the South Ridge on 31 July 1876. This ascent was made from the North Eigerjoch, which was reached via the Eiger Glacier. The party had reached North Eigerjoch from the south in 1874, but did not have time to continue to the summit. The approach via the Eiger Glacier is no longer practical due to crevasse and ice fall danger. Below are some additional views of and on the South Ridge.

Mittellegi Ridge: Mittelligi Hut and if climbing from the valley: Ostegg Hut South Ridge: Mönchsjoch Hut West Flank & West Ridge / North Face: Eiger Glacier Guest House At Kleine Scheidegg: Bahnhof Restaurant (has rooms & a dorm) The hotel at Kleine Scheidegg (VERY pricey) Hotel Bellevue Alpiglen: Berghaus Alpiglen Camping: Historically, many north face climbers have camped in the meadows above Alpiglen. Camping should be possible in the bowl below the West Flank, and for the South Ridge one could camp somewhere on the glacier between the Mönchjoch and the ridge proper.

The Eiger has more history than could or should be included on a mountain page such as this. There are entire books written about individual climbs and more articles in the literature than could even be reasonably listed here. Recommended English language books in print: The best English language comprehensive history of the Eiger that I am familiar with is EIGER THE VERTICAL ARENA. This book includes many chapters and facts about all aspects of the mountain. If one is interested in a detailed history of attempts and climbs of the North Face, then one must read THE WHITE SPIDER. Recommended English language books out of print: Hiebler, Toni, NORTH FACE IN WINTER, Barrie & Rockcliff, London, 1962; Lippincott, Philadelphia, 1963. An account of the first winter ascent of the north Face. Gillman, Peter; Haston, Dougal, EIGER DIRECT, Collins, London, 1966; DIRETTISSIMA, THE EIGER ASSAULT, Harper & Row, New York, 1966. An account of the first ascent of the Harlin Route on the north face. (The book by the German team on the climb is entitled EIGER, KAMPF um die DIRETTISSIMA, Chr. Belser Verlag, Stuttgart, 1966.)