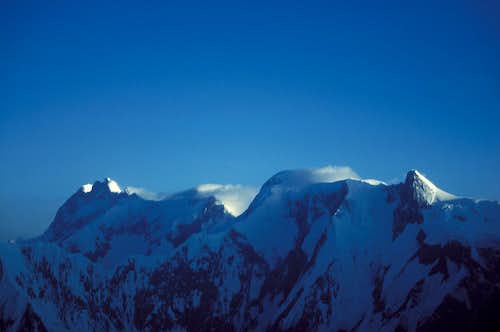 The Batura Crest from Bojohagur Duanasir with (right to left) Passu Sar, the unclimbed Muchu Chhish and the Batura peaks.

Batura consists of six separate summits according to mapmaker Jerzy Wala (see route photo and caption) or four summits according to Wikipedia. These summits form a crest known as the Batura Wall. In its entirety this crest extends over 35km without dropping below 6100m. Some of the peaks along the crest are as follows:

At the eastern end, Ultar Sar (7388m) is right above the Karakoram Highway. Fifteen expeditions attempted this steep mountain before it was finally climbed in 1996. Also visible from the highway is the elegant Shispare (7610m) which has only had one ascent, in 1975. Further west, Muchu Chhish (7453m) is one of the highest unclimbed peaks in the Karakoram. Of the Batura summits, Batura II (7762m) was the last to be climbed in 2008 after repeated attempts.

Other significant peaks in the range are the spectacular spire of Hachindar Chhish (7163m), climbed only once in 1982 and the unclimbed Kuk Sar II (6943m), whose north face is one of the most impressive in the Karakoram.

Gilgit can also be reached by bus along the Karakoram Highway from Pir Wadhai bus station in Rawalpindi. Buses leave in the afternoon and arrive around mid morning the next day, but can be delayed if the road is washed out or blocked by landslides, particularly during the monsoon rains in July and August. See www.lonelyplanet.com/thorntree for a travel forum and the latest on travel on the Karakoram Highway.

From Gilgit get a Hiace van up the Karakoram Highway to Aliabad (3 hours drive) in the Hunza Valley. Aliabad is the closest village to the start of the trek up the Muchuhar Valley to Base Camp. Otherwise, get a Hiace van to nearby Karimabad which is a pleasant place to stay.

The Karakoram Highway continues north of Karimabad up the Hunza Valley and over the Kunjerab Pass to Kashgar in the Xingjiang Province of China. 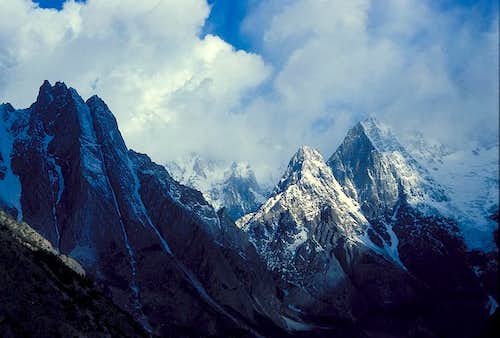 Muchuhar Peaks
Trekking to Base Camp
Porters can be hired in Aliabad. Pay will be per stage. On trekking routes there are established stages representing a day's walk, although sometimes more than one stage is walked in a day. Stages tend to be based on the best places to camp. Rates per stage are governed by the Ministry of Tourism, but will vary according to local conditions.

The trek to into the Muchuhar Valley starts at Hassanabad, a few kilometers from Aliabad. There is a good track as far as the snout of the Hassanabad Glacier. Climb onto the glacier and cross to the west side. Follow the edge of the glacier, then the rubble-strewn glacier itself which becomes the Muchuhar Glacier. The trail is intermittent as far as the last pastures beside the glacier, then non-existent. Base camp is at Oyarmin, right below the south face of Batura. The trek is strenuous and takes 3-4 days.

The trek to the north side of Batura is well travelled and rather easier. Porters can be hired in Passu. A boat must be taken along Attabad Lake if approaching Passu from the south. From Passu follow ablation valleys along the northern edge of the Batura Blacier. Pass the summer settlement of Yashpirt and reach the yak grazing pastures at Lupdhor after 3-4 days, with great views of the Batura Wall along the way.
Hunza Landslide 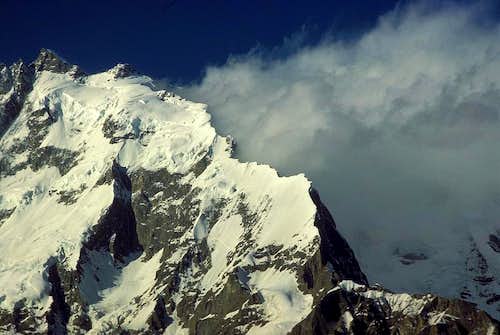 The south ridge of Batura V (7594m) from the Muchuhar Valley, climbed by a Polish expedition in 1983.
A visa is required and must be obtained prior to arrival. A single entry tourist visa is valid for three months from arrival. It is possible to extend visas in Islamabad.

The previous fee for peaks between 7501m and 8000m (i.e. Batura) was $4000 for a party of up to seven people with an additional royalty of $500 dollars for each person above seven.

Also in the Gilgit region a liaison officer is no longer required. An agent is still required (for expeditions requiring a permit) and the guide they provide can fulfill the role of the liaison officer.

For expeditions to peaks below 6500m you can do it all yourself. Just turn up at the last village and start haggling over porters!

Good agents I have used are:

Accomodation
This is cheap in Pakistan. In Gilgit the New Madina Guesthouse is recommended. Karimabad is a good place to relax after climbing. The cheap guesthouses around Zero Point are a good place to stay. I like the Haider Inn. 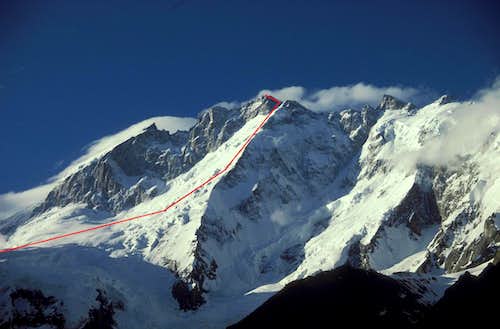 Batura south face route from the Muchuhar Valley. Only the top half of the route is visible, coming in from the Batokshi Col at 6000m on the left of the picture. Batura I's summit is centre. The unclimbed Batura I West (7794m) is left of centre. The pointed summit to the left is Batura II. Batura V is on the right and Batura VI is on the right edge of the picture.
The south face route from the Muchuhar Valley has a considerable height gain due to the low altitude of base camp at 4000m. Climb snow slopes, steepening towards the Batokshi Col at 6000m. The route from the Baltar Valley joins the Muchuhar route at this point. Make a rising traverse rightwards across snow slopes and ice fields to join the south ridge. Climb the left side of the ridge and join the east ridge just before the summit. Camp sites will vary.

The climbing season is from June to mid September. The monsoon from the Bay of Bengal moves westward and reaches Pakistan in late June through to September. The Karakoram is in the Himalayan rain shadow which limits the effect of the monsoon. However when the monsoon breaks down country it’s usually stormy in the mountains. The weather can change very quickly with snow fall higher up or heavy rain at lower altitudes. There can be extended spells of good weather. 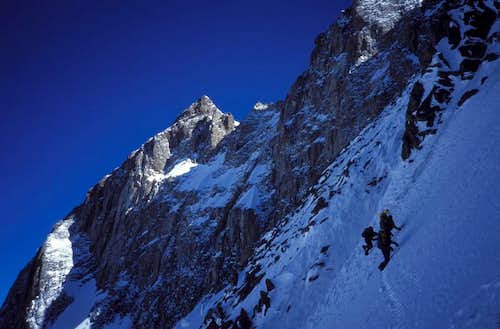 Climbers on the south face of Batura I with Batura II behind.

Maps
Batura Mustagh Orographical Sketch Map 1:100,000 by Jerzy Wala.
An excellent and accurate map which also includes topo-diagrams of some routes on the higher peaks.

Books
Chronik der Erschließung des Karakorum by Wolfgang Heichel. Teil I – Western Karakorum. Wissenschaftliche Alpenvereinshefte, Heft 36. Gemeinsam herausgeben vom Deutschen und vom Österreichischen Alpenverein. München 2003.
This is the first volume of what is intended to be an exhaustive chronicle of the climbing history of the Karakoram range. It contains stacks of useful information and excellent maps by Jerzy Wala. Volume I covers the mountains west of the Hunza River including the Batura Muztagh. Volume II is intended to cover the Rakaposhi Range and Volume III the Hispar Range. Only available in German.

Websites
www.climbmagazine.com for Mountain Info, a record of world mountaineering.
www.americanalpineclub.org for easily searchable online American Alpine Journal expedition reports.
www.alpineclub.org.uk for the Himalayan Index, a useful starting point to determine what has been climbed on peaks 6000m and above.
http://blankonthemap.free.fr/default.htm is a website in French and English devoted to the mountains of Northern Kashmir i.e. the Karakoram, Nanga Parbat, Hindu Kush and Hindu Raj.