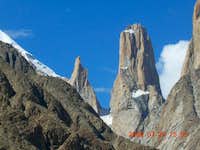 There are some impressive and extremely difficult rock towers around the world, competing in being the hardest to climb. One of the more famous and possibly the group of peaks that would get the most votes for being the toughest is the Trango Tower Peaks. There are two main summits in the central part of the group: Great Trango Tower (6286m) and Nameless Tower (6230m) a.k.a. just Trango Tower.
The group is reasonable easy to access as it is located much closer to civilization than many other popular peaks in Pakistan. You would suspect a peak like Trango Tower is an expensive climb, but it isn’t. Like all other peaks in Pakistan the price tag on the permit is determined by the peak’s elevation and therefore Trango Tower comes at a very affordable price. More about this in the red tape section..
The peaks have some of the highest vertical faces on the planet and were for a long time some of the most coveted mountaineering challenges. It was not until 1975 the area opened for climbing and the race for the hard-to-reach summits began.

Great Trango Tower has three routes straight up the E/NE face and a couple of alpine routes on the NW and W sides of the peak. Nameless Tower has been climbed via many routes, which all are located on its SE and SW faces. It's said the quality of the granite is very good on both the main peaks as well as on the lesser peaks in the area.

Afzal's list of the peaks in the core group.

Temporary Remarks
1). The photo captions are very short, as I'm considering re-scanning all my photos on this page.
2). There are photos on this page showing Uli Biaho, Lak, The Cathedral etc. These peaks are not in the Central Trango Group, but I decided to include them on the page, at least until someone creates another group page or a separate page for any of those peaks. 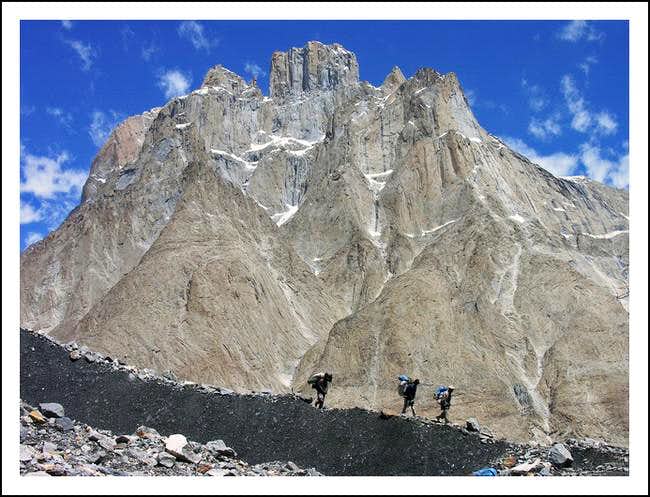 The Cathedral in the Trango Group seen from close to Paiju. Photo added and taken by Besucher01 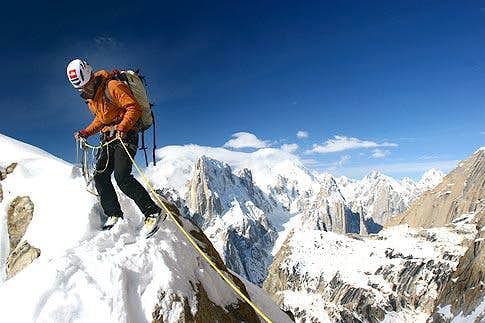 On the upper section of Trango

I only list first ascents on new routes plus some other interesting ascents. Please let me know about other climbs you would like to include.

Hello! Correct name of the first woman climber is Catherine Destivelle (and not "Destiville"). Congratulations for this very comprehensive page. e

Thanks for the remark. I have changed the spelling and linked her name to her personal web site. Cheers, Janne.

Thank you Corax for the great information about Trango Towers. Money & Costs Currency: Pakistani Rupee. 141.60 Rps = 1 US$ in April 2019. Flight from Islamabad To Skardu is very frequent. Pakistan International Airline is operating an Airbus PK451on daily basis. From Islamabad To Skardu is now only 20-22 Hours drive via Babusar Pass or via Karakoram Highway. It would be wise to contact a local Tour Operator to organise the trip, Documentations and get up to date information. One of the oldest and Government licence Tour Operator from Skardu is Trango Adventure. they will be happy to provide the Latest and up to date informations. info@trangoadventure.com https://www.trangoadventure.com