Diran is located in the Rakaposhi-Haramosh Range in the western Karakoram. Viewed from the Hunza Valley, Diran is a gentle pyramid and is considered to be the second easiest 7000m peak in the Karakoram after Spantik, although it has a reputation for avalanches. The Karakoram Highway runs up the Hunza Valley and gives easy access to the mountain.

Diran got a second route in 1993 when the northeast ridge was climbed and in 1996 the mountain was climbed from the south.

Gilgit can also be reached by bus along the Karakoram Highway from Pir Wadhai bus station in Rawalpindi. Buses leave in the afternoon and arrive around mid morning the next day, but can be delayed if the road is washed out or blocked by landslides. See www.lonelyplanet.com/thorntree for a travel forum and the latest on travel on the Karakoram Highway.

From Gilgit get a Hiace van into the Hunza Valley and get off at the Minapin turn off (3 hours drive from Gilgit). Minapin village is the start of the trek to Diran Base Camp. The village is some way up a hill from the turn off. Otherwise get a van to Karimabad (3 hours drive) which is a pleasant place to stay. From here a jeep can be arranged to take you directly to Minapin. Easier still, hire a jeep in Gilgit to go directly to Minapin.

The Karakoram Highway continues north of Karimabad up the Hunza Valley to Passu and over the Kunjerab Pass to Kashgar in the Xingjiang Province of China.

Trekking to Base Camp
Porters can be hired in Minapin or Chirah. Pay will be per stage. On trekking routes there are established stages representing a day's walk, although sometimes more than one stage is walked in a day. Stages tend to be based on the best places to camp. Rates per stage are governed by the Ministry of Tourism, but will vary according to local conditions. If you have a guide he should be useful in negotiations.

North: One day from Minapin village to Tagphari. Day two, cross the Minapin Glacier and walk up to Diran base camp. An advance base camp can be made at 4000m on the glacier below the north face.

South: Two hours from Chirah to a grassy camp site at Biyabari. Day two, follow the eastern side of the Hinarche Glacier to Hinarche Harai, a camp site below the southwest side of the mountain.

Minapin Glacier
Campsites
There are good camp sites at Tagphari, Diran Base Camp and Hinarche Harai.

Also in the Gilgit region a liaison officer is no longer required. An agent is still required (for expeditions requiring a permit) and the guide they provide can fulfill the role of the liaison officer.

For expeditions to peaks below 6500m you can do it all yourself. Just turn up at the last village and start haggling over porters!

Good agents I have used are:
Adventure Tours Pakistan
Himalaya Trek and Tours 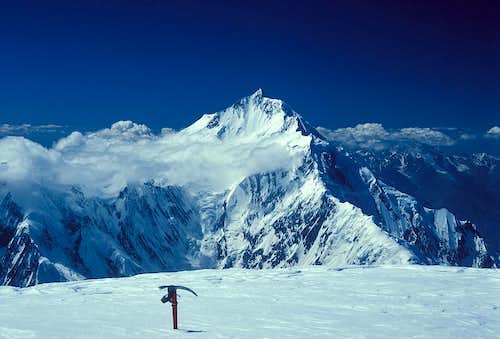 From the glacier climb the north face, picking a route between crevasses and seracs which will vary from year to year. Deep snow could be encountered and the slope is prone to avalanches. Join the west ridge at 6300m and climb this to the top, which is a large plateau.

When to Climb
The climbing season is from June to mid September. The monsoon from the Bay of Bengal moves westward and reaches Pakistan in late June through to September. The Karakoram is in the Himalayan rain shadow which limits the effect of the monsoon. However when the monsoon breaks down country it’s usually stormy in the mountains. The weather can change very quickly with snow fall higher up or heavy rain at lower altitudes. Climbing in the Karakoram requires considerable patience. There can be extended spells of good weather; the difficulty thing is predicting when they will happen.

The Karakoram summer is hot. Mid summer temperatures in Gilgit at 1494m are around 40 degrees C dropping 6.2 degrees for each 1000 metres. It can be hot even at altitude in the full glare of the sun. At lower altitudes around 5000m there is often not a good freeze and alpine starts are necessary. Avalanches and rockfall are common particularly in gullies and on faces. 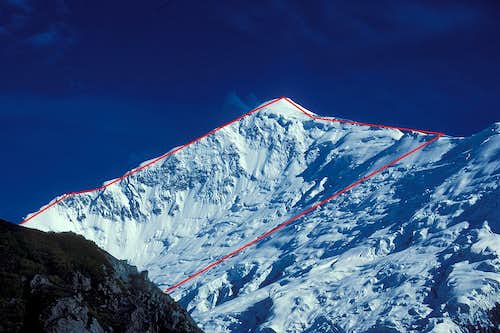 Books
Himalaya Alpine-Style by Andy Fanshawe and Stephen Venables (1996) ISBN: 0898864569 An inspirational book with a section on Diran.

Websites
www.climbmagazine.com for Mountain Info, a record of world mountaineering.
www.americanalpineclub.org for easily searchable online American Alpine Journal expedition reports.
www.alpine-club.org.uk for the Himalayan Index, a useful starting point to determine what has been climbed on peaks 6000m and above.
http://blankonthemap.free.fr/default.htm is a website in French and English devoted to the mountains of Northern Kashmir i.e. the Karakoram, Nanga Parbat, Hindu Kush and Hindu Raj.