Shaltar Peak is a very accessible peak in the Hunza Valley in the western Karakoram. From the summit there are fine views of the surrounding 7000m peaks such as Diran, Rakaposhi, Spantik and Ultar.

The first ascent of Shaltar Peak was by a British expedition in 1988, climbing the east side of the mountain from the Barpu  Glacier.

Pete Thompson and Kees Dykwell made the second ascent in July 1989, climbing a new route up the north ridge. 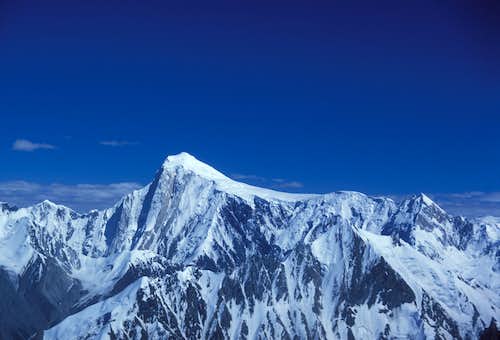 Spantik from Shaltar Peak with the celebrated Golden Pillar route between sunlight and shade. 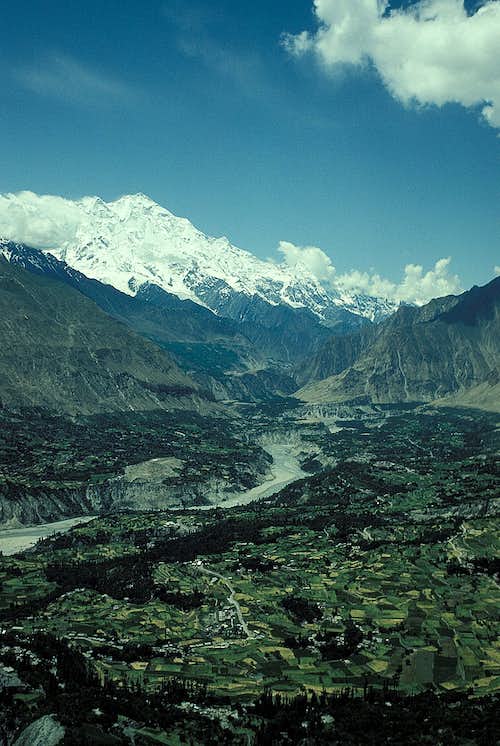 The Hunza Valley near Karimabad.

Gilgit can also be reached by bus along the Karakoram Highway from Pir Wadhai bus station in Rawalpindi, not far from Islamabad. Or ask in your hotel about other buses. Buses leave in the afternoon and take about 18 hours, but can be delayed if the road is washed out or blocked by landslides.

From Gilgit get a Hiace van up the Karakoram Highway to Karimabad in the Hunza Valley (3 hours), which is a nice place to stay. From Karimabad hire a jeep to Hopar (1 hour). There is a guesthouse called the Hopar Inn.

Beyond Karimabad, the Karakoram Highway continues up the Hunza Valley and crosses the Khunjerab Pass into China.

The peak can be seen from Hopar and the approach is obvious. Cross the Bualtar Glacier without too much difficulty. Walk south along the ablation valley until a side valley leads steeply to a cirque below the peak. The distance is not great but the height gain is considerable from Hopar at 2800m to the cirque at 4470m, so it would be best done in two days. Porters could be hired in Hopar. 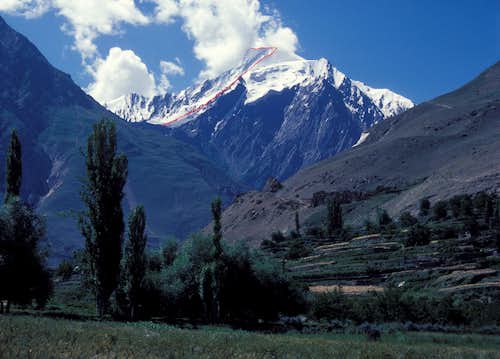 From the cirque a gully leads to the north ridge. Follow the north ridge to the summit, alpine PD. We took one axe each, crampons, a thin rope and a couple of ice screws. We bivied on the descent. We used no porters in a round trip from Hopar in four days. 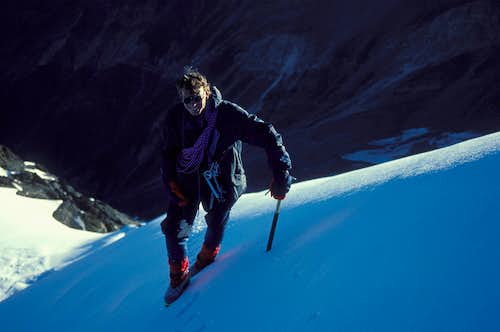 The Karakoram climate is continental and semi arid. Winters are extremely cold. The average temperature in Karimabad (2300m) is minus 3.8°C in January. July and August are the hottest months with a maximum temperature of 29.6°C in August. Rainfall is low with an annual average of 125mm. May is the wettest month.


The monsoon rains sweep across Pakistan from the Indian Ocean from late June to September. The rains are much reduced by the time they reach the Karakoram and often fall as occasional storms. Southern areas will get more monsoon rain than the drier north.

The climbing season is June to mid September. There can be long spells of fine weather, but also persistant bad weather, so climbing requires patience. June has the best weather, but it can still be very snowy on the mountains.


Summers are hot in the Karakoram, particularly trekking to base camp at lower altitudes. Even at altitude it can be hot in the intense sunlight, but diurnal temperatures are extreme with the temperature falling rapidly at night.


Average July temperatures are 16.4°C in Karimabad and fall approximately 6.5°C per 1000m of ascent (or more in the dry Karakoram air), giving an average temperature of about 12°C at a 4000m base camp, again with a considerable diurnal range. 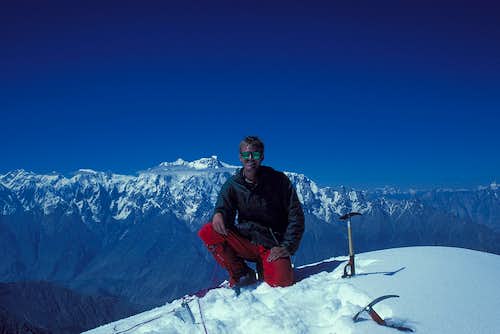 Pete Thompson on the summit of Shaltar Peak in July 1989. Ultar is in the background.

Peaks below 6500m do not require a permit or a liaison officer in Pakistan.

On January 4 2010 a massive landslide occurred 14 km upstream from Karimabad at Attabad village killing twenty people. The flow of the Hunza River was blocked for five months creating a lake 21 km long and 100m deep known as Attabad Lake. 6,000 people were displaced from inundated villages and 19 km of the Karakoram Highway were destroyed.

A major flood downstream was feared as the water level approached the top of the dam. This did not happen as water began flowing over the dam in June 2010. In 2012 the spillway was blasted twice and the water level of the lake was reduced by ten metres.

The Karakoram Highway over the Kunjerab Pass to China remained open and boats ferried passengers along the lake. In 2016 the Chinese finished building a road with several tunnels past the lake. As a result in 2016 there was an excellent road along the entire length of the Hunza Valley.

www.climbmagazine.com for the Mountain Info archive of mountaineering reports.

www.alpine-club.org.uk for the Himalayan Index, a useful starting point to determine what has been climbed on peaks 6000m and above.

http://blankonthemap.free.fr/default.htm is a website in French and English devoted to the mountains of Northern Kashmir i.e. the Karakoram, Nanga Parbat, Hindu Kush and Hindu Raj.