This beautiful and imposing pyramid belongs to the Gran Paradiso Group, forming a triptych with Tresenta (3.609m) and Ciarforon (3.642m). Here we describe a route on the North Face, while the Normal Route via the Northeast Ridge to the Colle del Ciarforon (3.317m) and subsequent crossing on Northern Monciair Glacier is synthesized downhill. Historically speaking, it now has a fairly long history, which begins in the month of May 1920, and therefore just ended the First World War. The first to climb it are three Turin mountaineers who attempted the first direct ascension, as well as absolute of the wall; but they were repelled on the Northwest "Spigolo" or Corner by the excessive presence of the snow with verglass. On July 3, 1927, R. Chabod and F. De Rosa tried it, but due to the ice that was too hard (let's not forget that the tools were very different from the current ones at the time), they must, as Academician Renato Chabod says in the Guide of Mounts by Italy, Edit. CAI / TCI 1939, 1963 and 1980 "Gran Paradiso National Park", page147: 32db) VARIANT. - ... "It's just a loophole ...", abandon the actual wall, or at least leave out the main slide on the right (West) "taking refuge" with a traverse to the left. This variant, after passing the rocky rib that divides the two sectors, climbs up an icy gully placed between it and another secondary or lower rocky rib that flows into the NE ridge on the snowy saddle just beyond the "Gran Gendarme" . The same Chabod tries again on July 5, 1936, together with mountaineers Enrico Adami, Emanuele Andreis and Luigi Bon, all good icers: "32da) DIRECT VARIANT ... go up the slope for about three quarters of its height, up to where that is a marked and comfortable horizontal ledge interrupts the continuity of the rocky bastion of the d. or. (orographic right NDR) ... along the ledge for 15 - 20 meters you reach the edge of the bastion and continue along it - rock and snow not too much steep - up to the snowy little crest in the shape of a reversed comma ... ". In a nutshell, they reach the triangular snowy slope below the NE Ridge above the previous variant. The subsequent attempt made on 9 August 1938 by L. Cottafavi and L. Santurini ends with a reverse variant of the previous attempts: the same in practice go up along the right or western edge of the icy slope and then conclude on the shoulder of the NW Ridge. .. that is, the route of August 1897 by the Londoner George Yeld with the Guide of Valtournenche Sylvain Pession. Another more important attempt but still requiring a new retreat or ulterior variant was made on 14 July 1974 by G. De Agostini, A. Migliari and M. Sartori, but it ended, after having passed the lowest part of the dividing rocky rib, reuniting above with the variant of july 1936. The problem of the completely direct ascent, then comprensive of the last rocky strech more difficult, was solved by the Pian Felina mountaineers Osvaldo Cardellina and Camillo Roberto Ferronato who, on 20 July 1980, centrally climbed the terminal bastion, exiting directly to the Top. Their choice was forced, since the glacial slope formed by snow not transformed at all and the very soft weather with a rather high temperature forced them to make this obliged choice due to the excessive danger of the same (see various photos on the page). It is certainly a coveted ascension which, unfortunately due to the retreat of the ice, has recently lost in attraction, therefore comprensive of the last strech more difficult even if not always with good conditions of rock. So nowadays this ice climbing is certainly more exposed to stone discharges, due to the lack of the permafrost glue.

The triangular and exclusively rocky West Wall rises, between the Northwest "Spigolo" and the South-Southwest Ridge, which rises from Colle di Monciair, is for almost 500 meters above the Breuil Glacier, offering an idea of large compact wall; in reality it can be divided into three sections and sectors, of which the really compact one is the rocky "shield" positioned in the center. The other two sides have rocks, although still quite difficult, but somewhat more broken. As well as all the basal base formed by several horizontal steps which, with a diagonal ascent from Northwest to Southeast, can be crossed, taking advantage of the first more great ledge, for the alternative climb to the Colle, or rather Colletto di Monciair having exclusively mountaineering importance (3.297 / 8 m) as performed by Giovanni Bobba, Luigi Vaccarone and P. Re Fiorentin with the guide of Rhêmes Casimiro Thérisod on 10 August 1891. While the "central shield" still remains inviolate, the left sector, or more Northern, was the first route built on the wall by Remo Chabod with E. Martino on 31 August 1936; another route, but "mixed", because it uses the Northwest "Spigolo" otherwise an Edge in the final part, was opened even further to the left by the roped composed of C. Durando, F. Galliano, G. Del Santo P. and S. Giacoletto and G . Sereno (which in the final stretch was divided into two different itineraries) on 27 September 1970. The right sector, more Southern and that is between the "central shield" and the South-southwest Crest, was instead climbed by Osvaldo Cardellina, Marco Cossard and Giuseppe Lamazzi on 5th July 1983 and presents a less difficult route than the previous ones, bypassing the "shield" in the final part to conclude with the crest mentioned above. The Eastern side, on the other hand, has a completely different structure and, besides being less difficult, certainly much less elegant. Analyzing it, we find an East Face, moreover divided into two parts of which the Northern snowy one and the rocky Southern one, facing over the homonymous Broglio Glacier; therefore with Italian wording, but in the Canavese area in North-northwestern Piedmont. The same is faced for the first time on 12 July 1923 by Ester della Valle di Casanova, Gigetta Matricardi with the Milan mountaineer, at that time of well-known classic mountaineering, Aldo Bonacossa; it is a longer than not difficult climb (about 600 meters), which starts at an altitude of about 2,950 meters, that is where this rocky spur plunges into the lower and more SW part of the glacier. It is also reported a possibility of rapid descent just North of the rocky ridge, such that, according to the authors, it could, after the first about 50 meters below the Summit, allow a quiet slide on the less noble parts up to the glacier. But from this climb the Bonacossa sees the opportunity to climb the nearby SE Face, which he climbs just the following week with A. Sarfatti. They trace a somewhat strange and "lopsided" route, because, from the detrital ledges of the Colletto di Monciair, they climb easily but sideways to the Summit. The thing is, at least partially, "straightened" by Don P. Solero who with B. Guglielmetti on 18 September 1940 carried out a direct route in the middle. In truth, theirs too is a bit of a makeshift route, because, after having attacked on the left at the large boulder at the base of the gully that leads to the Colletto di Monciair, they still go up deviating to the right, so much so that they end up on the Eastern "Crestone" at about 100 meters from the Top. Given the four sides (North, West and East which is double, ie SE and NW) it remains to take a look at the ridges: already mentioned of the "Spigolo" NW of 1897 and of the "Crestone" East of 1923, we must observe the S -SO Ridge, which descends to the Colletto di Monciair separating this Cima from the Denti del Broglio (3.454m) and the NE Crest which leads to the Colle del Ciarforon (3.417m) and to the Summit of the same name (3.642m). The first was climbed on 11 July 1921 by Aldo Bonacossa (who can therefore be considered the "King of the Monciair") together with Maria Sbrojavacca and is to be considered as a fun but demanding climb, even if it bypasses some difficult sections in its route, on rock however good. The second constitutes the Normal Via from the Aosta's Valley side or from Pont Valsavaranche location and Vittorio Emanuele Shelter. It was presumably traveled by Martino Baretti and A. Blanchetti in 1867, while the first certain ascension is that of G. Frasca with G. Blanchetti on July 14, 1881. It is a simple and easy climb (it is almost more complicated to reach Ciarforon's Pass above Glacier de Monciair or Montchair in case of verglass presence) which linearly leads to the Top, bypassing on the right (West) the "Gran Gendarme" (3.378m). A curiosity: prior to 1926 the mountaineer P. Filippi crossed it in its entirety, thus making the first full ascension.

BY CAR: BY PLANE: Shortly after Introd, you arrive at a junction: turn left, entering Valsavarenche, and passing through many Villages (Degioz, Eaux Rousses, etc.) you can arrive at Pont (1.960m) where the road ends. The ascent to Becca di Monciair is usually done in two stages: on the first day you follow the normal route to Gran Paradiso and gain 770m of elevation from Pont (1.960m) to Rifugio Vittorio Emanuele (2.730m). The second day is spent on the climb to the summit. 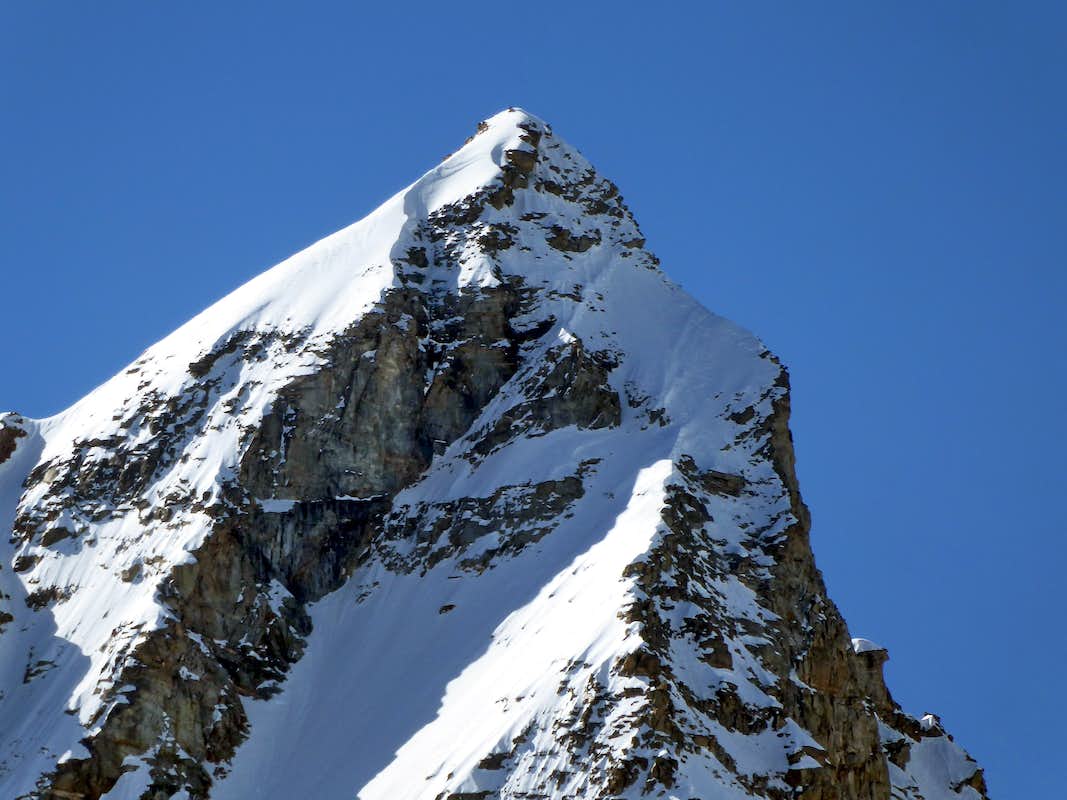 The best time is obviously July through September. Most ascent routes to the summit include glaciers so you need crampons anyway.

Accomodations can be found in all Villages of Valsavarenche. You can use Rifugio Vittorio Emanuele as base for the ascents to both Gran Paradiso, Ciarforon and Becca di Monciair. In addition there are several campgrounds in Valsavarenche, one of which just near the trailhead. Telephone Numbers: Tourist information "Comunità Montana Gran Paradiso" 0165/95055. Union of Mountain Guides (Valle d'Aosta)0165/44448.

I want to thank my three SP friends who respectively helped me to prepare the text (Livioz and Gangolf) and mainly to translate it in English (Brenta) and my friend Osvaldo for the Overview text and translation into the English and into the Italian for the other sections.