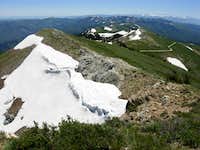 Bountiful Peak is one of the high mountains of the Northern Wasatch. It is a prominent peak but is often overshadowed by Francis Peak, its neighbor to the north. The mountain is shaped like a crescent and appears large and rounded. The east side is steep and surrounded by rugged cliffs. Several canyons cut through the west side of the mountain but only Parrish Creek is hiked often. Bountiful Peak rises above 9,000 feet elevation along with several other mountains in the area.

Farmington Lake is on the northeast face of Bountiful Peak. They are one of the few lakes in the Northern Wasatch Mountains. Skyline Drive is on the north, east, and south side of the mountain. It is accessed most easily from Farmington Canyon. The road goes near the summit but it is still worth climbing from the valley. This is often thought to be the least interesting area of the Wasatch but in my opinion there are several significant peaks to hike here.

The Northern Wasatch Mountains run north to south along a long ridgeline that parallels the cities of the Wasatch Front. Thurston Peak is the highest mountain on the ridge above Davis County. Francis Peak is the most well known because of the large FAA radar domes on its summit. Bountiful Peak is farther south across Farmington Canyon. The ridge that goes south from Bountiful Peak eventually meets up with Centerville Peak, and farther on the ridge to Sessions Mountains Ridge Peaks, Grandview Peak, and Lookout Peak near Parleys Canyon.

Bountiful means giving freely and generously, having abundance, and being plentiful. If you don't already know, Bountiful is one of the ancient cities described in the Book of Mormon. It got its name from the fact that it was one of the first settlements in Utah. The mountain is actually closer to the city of Centerville which is situated near the foothills. Bountiful is located six miles farther southwest of the peak. 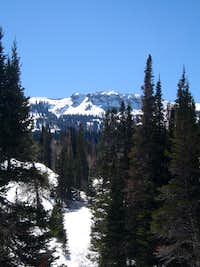 From I-15 take the Parrish Lane (exit 319) in Centerville. Continue on Parrish Lane until it ends at 700 East. Turn left (north) and follow the narrow road as it curves and reaches a large graded dirt parking lot. Any vehicle should be able to reach this trailhead when the road is dry. If the road is snowy and icy, then you can park near the side of the road at the end of 700 East. This route has the advantage of year round access.

Drive on I-15 and take the exit into the city of Farmington. Drive east up 500 South off 200 East and follow the bending road south. The road winds up the hill and the trailhead is located south of Davis Canyon. Look for a draw after passing the first small canyon you come to with a sign labeled as Davis Creek. There is room for a few cars here and near the reservoir. 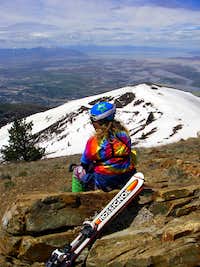 View from the Top

From I-15 take the Lagoon exit in Farmington and go east to Main Street. Take a right onto Main and then bend east onto 600 North. Stay on 600 North when the road bends south until it ends at 100 East. Go north on 100 East onto Farmington Canyon Road. It is paved for the first mile and then turns into a windy and narrow dirt road with steep dropoffs. Most cars will be able to make the journey. There's a fork in the road at the top of the canyon, about eight miles up. Turn right (south) on the road toward Bountiful Peak. A sign marking Bountiful Peak Campground will be on the right. A nice parking area is farther down the road on the left.

From I-15, take exit 317. Turn right onto 400 North and go east toward the mountains for 2.6 miles. Then make a sharp left toward Skyline Drive for 0.3 miles, then turn right onto Skyline Drive. You will pass the Big B on the side of the mountain. The road passes a dirt parking lot where you'll see motorcycle and off road vehicles. Then it becomes a dirt road. Drive up this for about 5 miles. The trailhead is where the road splits with Skyline Road continuing north and Sessions Mountains Road going east. It is an obvious trailhead. Park in the dirt parking lot. The trailhead has space for over a dozen vehicles.

Parrish Creek is the best route for climbing Bountiful Peak from the west in winter. It was named after Samuel Parrish who settled along the creek in 1848. I recommend this route for anyone looking for a fun mountain to climb in winter. Due to its location in the Northern Wasatch, you will probably not see very many people. The route basically follows the ridge that is located between Parrish Canyon and Centerville Canyon. It starts by following the ridge overlooking Parrish Canyon and then goes around the ridge that overlooks Centerville Canyon. The foothill that is located above both canyons is known as Centerville Peak. The trail meets the Skyline Drive road below the ridgeline. It then follows the road north to the summit of Bountiful Peak.

The Southern Traverse of Bountiful Peak is a good alternative to routes approached from Farmington Canyon. This traverse is longer than the route from the northeast but shorter and less strenuous than Parrish Creek. You get to the trailhead by driving up Skyline Drive above Bountiful. The route starts at the junction of the Sessions Mountain Road and Skyline Drive. The first part is steep gaining 650 feet in half a mile. Then you traverse on several points on the ridge for three miles. This route is seven miles round trip with 1,150 gain. Cumulative elevation will be more because of the gain and loss along the ridge.

This is a pretty hike that follows the creek near several waterfalls. It is best done in Spring or Fall. The first waterfall is reached on a nice trail and can be seen on the left heading up canyon. The trail continues up toward a higher waterfall. Another junction will be met later. None of them currently have signs although some have arrows marking the way. The trail goes up toward the last two waterfalls in Davis Creek with a total of four. The trail on the right goes toward a rock formation nicknamed El Capitan. The trail in this section is not as maintained as it was below. It gets steeper as it climbs higher. There is a meadow near a horse camp and the route up Davis Creek continues all the way to Bountiful Peak. This trail is one of the newest on the mountain.

You can drive nearly to the top of Bountiful Peak but it is better to start near the campground to make a nice hike out of it. In winter and early spring, you'll probably be starting at the highest point you are able to drive up the road. From your parking spot, start hiking up the dirt road. There are many switchbacks going up the east side of the mountain. The road makes a long loop around the north and then goes back south as it bends around the west side of the mountain. At the highest switchback is a trail that branches off and goes directly to the summit. This is a good early season climb when all of the other peaks in the Wasatch are still covered in snow. From Bountiful Peak Campground to the summit is 3.5 miles with 1,800 feet elevation gain. It will be shorter or longer depending on where you start hiking.

Most people climb Bountiful Peak during the warmer months of the year. This is usually from May through October. It can be climbed year round. In early and late season, there will be snow on the mountain.

All routes are out in the open so it can get hot during summer. Temperatures can reach above 80° F. For this reason, I recommend climbing the mountain in winter, spring, and fall. With all mountains in the Wasatch Range, check avalanche conditions before you go at the Utah Avalanche Center.

Francis Peak seen from the summit of Bountiful Peak 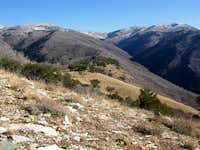 There are no fees for climbing this mountain.

The higher elevations of the Farmington Canyon - Skyline Drive Road are covered in snow in winter. You can drive as far as you want and start walking from there. A 4-wheel drive vehicle is needed and chains are recommended. Here is information on Trailhead parking during winter. 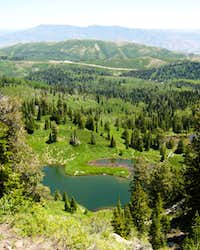 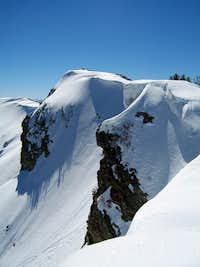 There are two nice campgrounds located up Farmington Canyon. There are over 30 campsites available here. Be aware that they may be full on weekends.

Sunset Campground is 5.3 miles up Farmington Canyon. It's located on the right side of the road. The campground is open from June through October. All camp sites have tables, grills, and fire circles. There are 16 sites on a first come, first serve basis.

Bountiful Peak Campground is 8.1 miles up Farmington Canyon. It is below the east face of Bountiful Peak. At the junction with Francis Peak Road, turn right (south), and the campground will be 0.6 miles further. The campground is usually open from the middle of June to late September. There are 21 single sites available and one large group site. 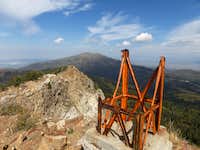 SP member, 46and2, has added an interesting photo on the left. It shows the view of Bountiful Peak from an airplane. You can see Skyline Drive making its way around the mountain. The ridge continues south toward Grandview Peak and Lookout Peak.

The summit area is rocky. There is an orange metal box object located near the benchmark and witness marker on top. The east face has a steep dropoff and cliff bands. Looking west, you will have a great view of the cities below the Northern Wasatch Mountains and the Great Salt Lake. The southern view includes the ridge that continues toward Parleys Canyon. The mountains of the Central Wasatch can be seen on the skyline including Mount Olympus and Cottonwood Ridge. The view north is dominated by Francis Peak.