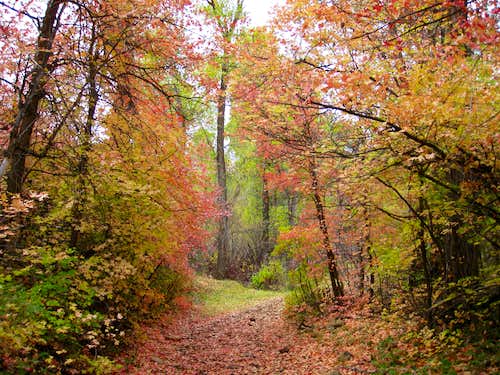 Located near the East Canyon Reservoir, which is fairly close to both Salt Lake City and Ogden, Redrock Peak has a seldom visited summit although during the hunting season, the lower slopes are more popular. A gated road goes up from the highway and is open to hikers and equestrians during most of the year with a closure from January 1 to the second saturday in April. The gated road
is signed to keep motorized traffic out. 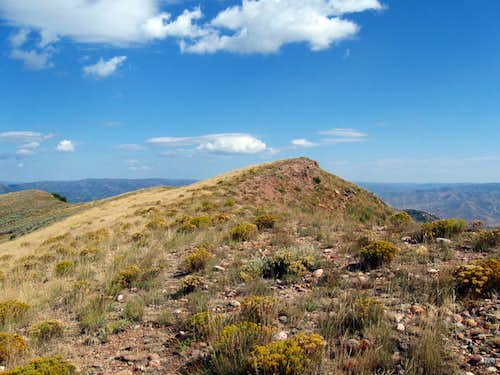 Approaching summit from the south
The appeal of Redrock peak to me was the fact that it was one of the top 100 Prominence peaks of Utah, coming in at #92 on that list. I didn't know anyone who had been to this peak so my wife and I arrived at the trailhead with only a map and my GPS waypoints (which all worked perfectly). I was relieved to see that access was permitted and was even more pleased when I found the jeep road to be in great shape and provided me with an easy 3 miles to where I would take off cross country to reach the peak.

Victor Zhou had this commentary about the peak:
"Redrock turned out to be a surprisingly nice little gem close to the city; the lower canyon had some, well, pretty cool knobs of red rock, while the upper slopes had a lot of colorful and smooth rocks that looked like pebbles on a beach, if they were the size of your head. The views from the top are pretty decent, the peak being a good perch to view the Wasatch Range from its central to its northern reaches."

The East Canyon reservoir area is very popular with boaters, campers and fishing enthusiasts. Not far from the trailhead is the East Canyon State Park, a popular destination. 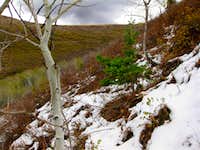 From Salt Lake City, head up Parley's Canyon on I-80 and take exit 134 onto SR 65. Passing under the interstate, follow this road as it makes its way over a pass (has a trailhead for Big Mountain and a vault toilet) and drop down into the East Canyon area, passing East Canyon Resort just about the time you come to the lake formed by the dam which has created it. Follow SR 65 until it comes to a junction with SR 66 and turn left onto SR 66. You will pass the East Canyon State Park and then pass by the top of the dam and the road will then descend as you head towards Morgan and I-84. The turnoff is signaled by a large information board on the right side of the road (left, if you are coming from the north). A gate is just beyond the sign but it was open during my visit and you can continue up the road for about 1/4th of a mile until you come to another gate at which point you will need to park. This is the trailhead. If the gate by the highway is closed, that will be the trailhead.
The distance from SR 65/SR 66 junction is just over 4 miles. Watch for MP 4. 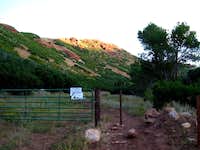 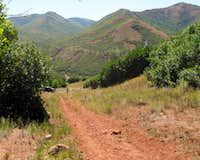 From Ogden, take I-84 and take exit 103 near Morgan and head south on SR 66. I can't give you the exact miles from that junction on I-84 to the Redrock access road (a guess is about 9 miles) but I a GPS waypoint is provided below that will make it easier for you to be aware of the access road and signboard mentioned earlier. Watch for MP 5, the turnoff will be beyond it.

From the trailhead gate, the first portion of the hike is along a road, in good condition for the first 2 1/2 miles. On the way you pass through another gate with a notice that asks you to close it after you open it. About the 2 1/2 mile mark, the road turns into a trail and a good one at that. The trail continues on past a spring (on the right side of the trail) at about 3 miles (7000' elevation) which is where you leave the trail and strike out southeast toward the peak, going cross country.

I was able to find good use trails most of the way and having the summit waypoint on my GPS was a big help. The final part leads up to a ridge that contains the highest spot, marked by two benchmarks. When you see those benchmarks, you are there. I suppose you could shorten this a bit by taking a more direct route than I did but I found the way I went to be enjoyable and very reasonable. I did keep an eye open for rattlesnakes as it seems like this would be prime rattlesnake country but I lucked out and saw none.
Still, it pays to be alert. The spring is a good source of water and I would definitely filter it if you were to use it.
Briefly, it was 8+ miles roundtrip with over 2700' of elevation gain. A better route has been determined to be the one noted below.


SP member Greg found a more direct route up from around the 6500 foot level. He found a great use trail that took him up close to the summit. I didn't see a trail taking off from the road but if you are aware that there is a better route up than the one I took, you might want to keep an eye open for that use trail. Also Eric Willhite has a nice web page for this peak and you can access it HERE. He also went up the way Greg did and Mountaingazelle said she went down that way. It sounds like it is the best route up this mountain. Greg's map is posted below and Eric Willhite has an excellent map posted to his trip report.

This summit offers wonderful views in all directions and that alone makes it worth a hike.   See the photo section for some of the views that have been captured from this summit. Important to be aware of:
There is a closure to all access from Jan 1 to the 2nd saturday in April.

Stay on the jeep road until you reach the spring at the 7000 foot level.
I saw no warning signs of any kind that would indicate that you couldn't go cross country from there to get to the summit of Redrock Peak. Hunting is allowed on some of the land that belongs to DWR and for more information on that you'd have to check with the Department of Wildlife Resources. 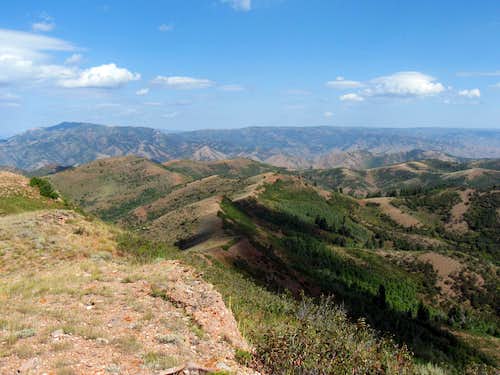 Great views from this one.

When we arrived at the gate (the second one from the road), there were several tents up and camping was taking place. We saw three different camps set up and there are no facilities. East Canyon State park has camping and facilities so that is a good possibility if you are needing to camp out.
Since the hike takes around 4 to 5 hours, most likely you will not need to camp out if you are from the local area. 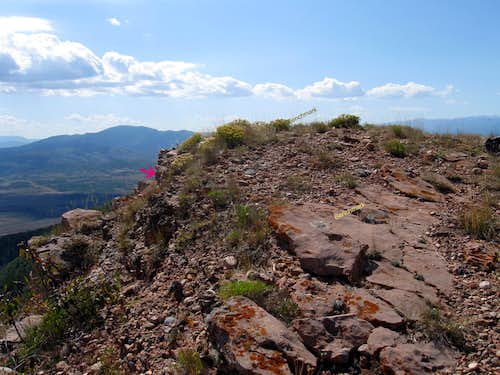 Where's that register? See  the arrow