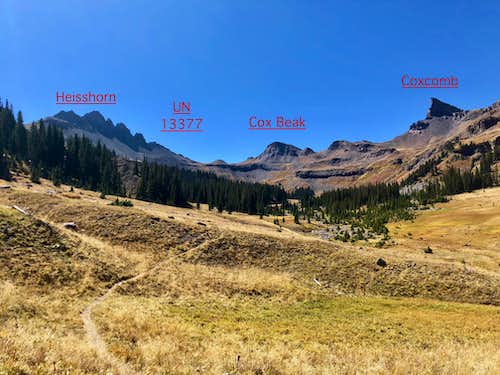 IMiddle Fork of Cimarron and peaks as seen from the trail
Unnamed 13206, also unofficially called "Cox Beak" is another low 13er located within Cimarron range of San Juan Mountains. The peak is not climbed often, but the views are spectacular in all directions. Coxcomb looks so dramatic from here. Most of the climb can be done on a trail with only the final ascent on a grass and some talus and scree (not bad). "Cox Beak" can be combined with another 13ers in the area. I chose a combination with Unnamed 13377 since I have done all other close by peaks. Some people did much longer combinations including Heisshorn (the ridge between Unnamed 13377 and Heisshorn is very tough and not recommended, most people drop down and bypass this ridge on the south side), El Punto, Unnamed 13340A and Unnamed 13222B. 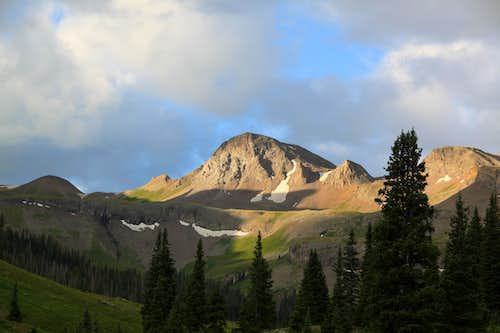 Cox Beak
Colorado Rank: 480
Class: 2
Wilderness: Uncompahgre
Parent Lineage: UN 13377 (saddle between those two UN 13377 and UN 13206 is 12,900)
Guide to Colorado Mountains with Robert Ormes (sort of a Bible of Colorado Mountains) provides a brief description: "At the base of the Middle Fork basin are two more seldom visited thirteeners that give outstanding views of nearby Coxcomb and Wetterhorn. Leave the Middle Fork trail just as it turns east at about 11,600 and bee-line due south to reach the saddle between Peak 13,206 and Peak 13,337. Head right for the former, a very short walk-up. Or turn left for the taller one, passing one obstacle on the right. Don't attempt the ridge between Peak 13,377 and Heisshorn to the north because of several notches".
Nearby Peaks: 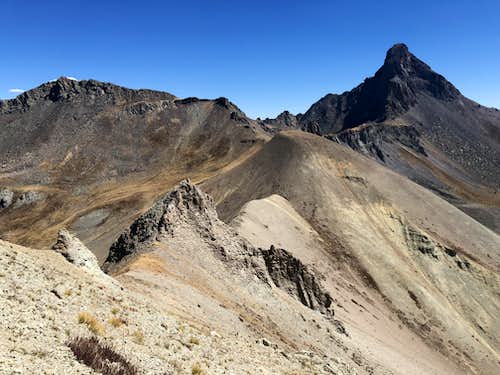 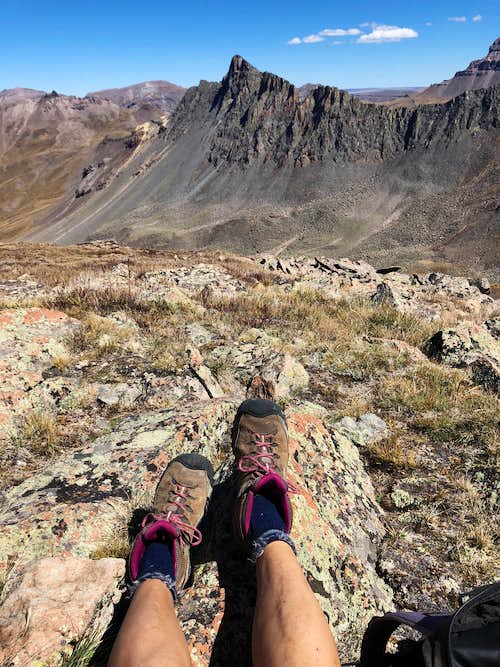 Summit of Cox Beak
Cimarron Trail: The trail travels south following the Middle Fork of Cimarron River at gentle grade. In approximately 0.3 miles the trail enters Uncompahgre Wilderness. It continues through spruce /fir and aspen where at about 2. 2 miles it intersects the Porphyry Basin Trail # 243 and it crosses a small drainage. After the crossing, it becomes steep for about 1/4 mile then levels off again. At approximately 4.1 miles, the trail leaves the river and begins to ascend the ridge between the Middle Fork drainage and the East Fork drainage.
I chose to follow a signed Coxcomb Trail #132 since my objective was Unnamed 13206, unofficially called "Cox Beak" (name obtained from the summit register). I took this trail all the way up to the saddle between Coxcomb and UN 13206. Coxcomb looked incredible from this view, like a long spire. There is a shorter way to go up to head directly for the saddle between UN 13377 and UN 13206 (I went this way down), but the Coxcomb trail was nicer and I did not mind exploring. The way up UN 13206 was easy, mostly grassy with some stable talus. From the summit of UN 13206 I continued on a very straightforward ridge to UN 13377. The descent from Cox Beak was a little bit steep at places and going up UN 13377 was very easy, there was a small trail and it was easy to follow. One of the best views one can get in Cimmaron's along this hike.
The summit of Cox Beak is large. There was a summit register (2018). 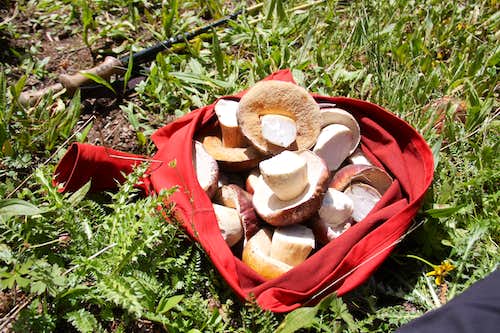 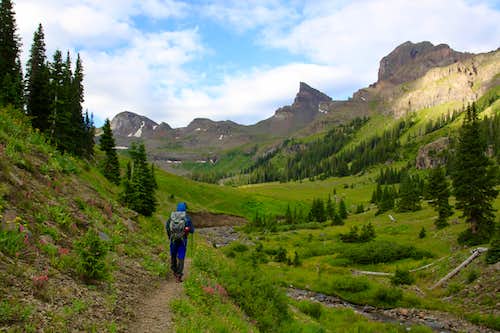 Middle Fork Basin
The Middle Fork of Cimarron Trail #227 is located within Uncompahgre Wilderness.
Uncompahgre Wilderness was designated in 1980. The name comes from a Ute Indian word with one of the translations being "dirty water". There are two fourteeners and at least twenty five 13,000 foot peaks.
Wilderness rules apply here: ALL VISITORS PROHIBITIONS:

Best is June through October, early May will still have too much snow. Also, the road may not be open all the way to the Middle Fork TH.  If traveling in the winter, always check avalanche conditions and be prepared to spend the night out.

Wilderness backpacking is excellent and highly recommended. The upper Middle Fork basin has plentiful beautiful camping spots.
You can sleep in the car right at the trailhead - comfortable flat parking.
There are also many campsites on your drive in along the Middle Fork road, great for car camping. Silverjack reservoir has a developed campground, which is a popular destination with locals. You have to pay fee to camp at Silver Jack.