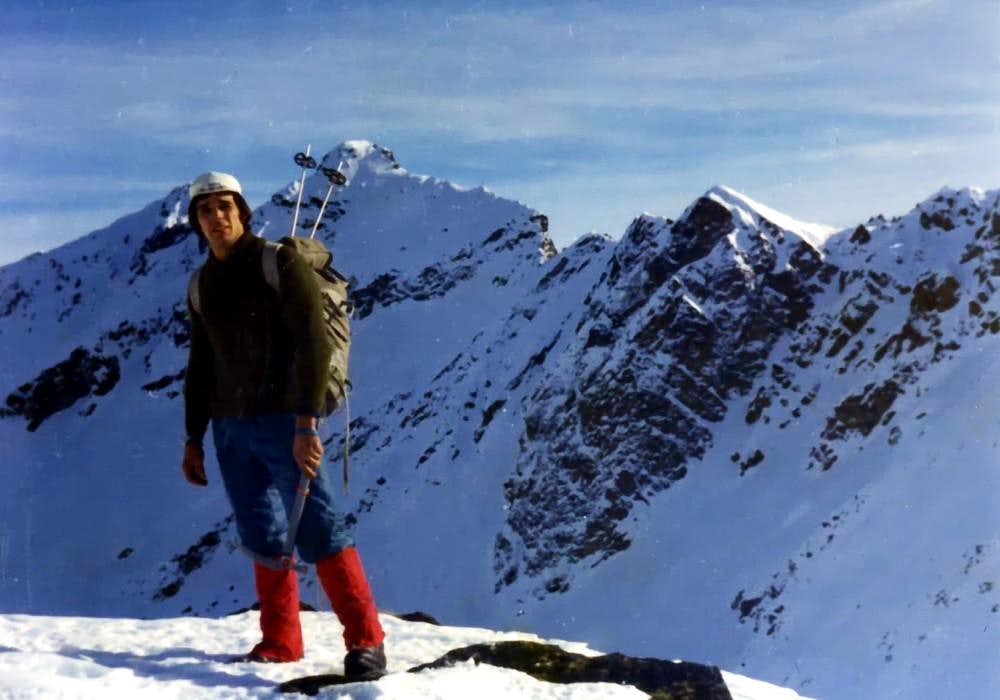 Surely this area than the North Dora Baltea River and towards the East in respect of Town of Aosta, that by the same stretches Eastward to reach the Basin Verrayes-St. Denis Municipalities at the foot of the Cima di Longhede and Becca d'Aver, offers fewer opportunities for excursions and Walking or Snowshoeing than the Western counterpart. In fact, despite being extended to over twenty miles on the longitudinal axis, it loses in depth than the previous from Courmayeur in Aosta City, formed not only by various terraces above the Dora Baltea (see the wide Basin Vetan) but also by small but long valleys that descend perpendicularly towards the same. For here is a series of small basins parallel from under the Becca of Roisan (above Roisan Common) are directed Eastward, forming a series of other combe (Viou and Sénevé) until you reach the Croix de Fana (2212m), large wooded promontory above the triple village of Trois Villes (1391m) on the border amongst the Municipalities of Quart, Saint Barthélemy and Nus. 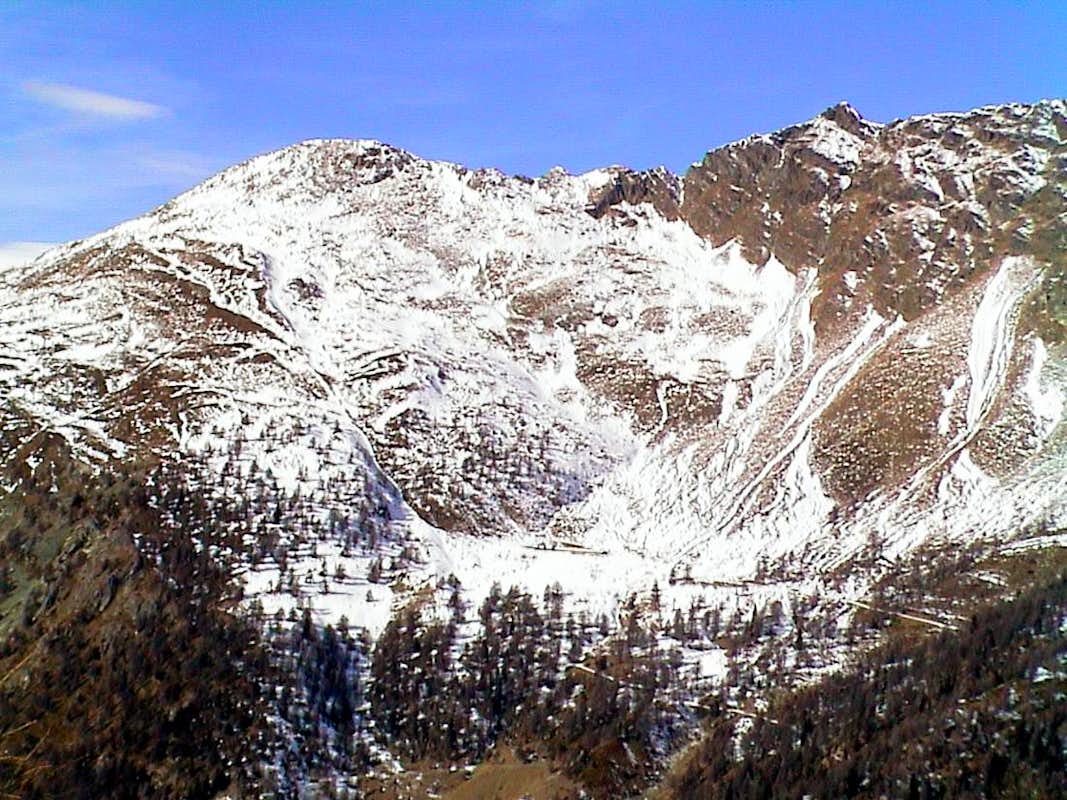 Comba Senevé at the beginning of the Other Eastern small Valleys, by emilius.
Over, and now the interior of the Valley of Saint Barthélemy, opens the Comba Deche, that has a vertical depth reaching the hill with the same name. As well as very important Pass (2645m) towards the Valpelline, between Becca Conge (2954m) and Punta Verdona (2868m) and just before the beautiful pyramid of Mount Faroma (3073m), now belonging fully to this valley. An aggregation perhaps, for this comba, somewhat arbitrary but certainly practical for even the farm road that runs, reaching in succession the mountain pastures of Nouva, Flemagne, Salé, Cré, Brunier, Clavel, La Seyvaz and Valchourda (2392m) leave just from Trois Villes beginning on top of Fonteil Village (1423m). Likewise the Southwestern Appendices of the watershed between the Valley of Saint Barthélemy and Valtournanche (Area of ​​the Torgnon Common) are widely justified as also belonging to the Basin Verrayes/Saint Denis (Becca d'Aver, Cima di Longhede, Filone Pass, Monte Ander and Mont de Pesse), where he is the only lake of Loson Picnic Area (1525m), albeit tiny, of this whole area. From Becca d'Aver one another partition falls instead to form to the Southeast the Hills of Aver, des Bornes and the famous and important of Saint Pantaléon (1650m) on which passes the Regional Road connecting the Municipalities of Chambave, Verrayes and Saint Denis with that of Torgnon in Valtournanche. Besides the partition expires at the "Chapel of Saint Evence" (1500m), the Village of Champlong to end just above the Castle of the "Passerin d'Entrèves" (550m), now just outside the Municipality of Châtillon. So a broad area, starting from the Municipality of Roisan the entrance of the Valley of San Bernardo, reaches the latter. Along this route many Hilltop, starting from Becca of Roisan (2546m) to that d'Aver (2469m), through the West Tsaat a l'Etsena (2971m), maximum Vertex of the whole area. 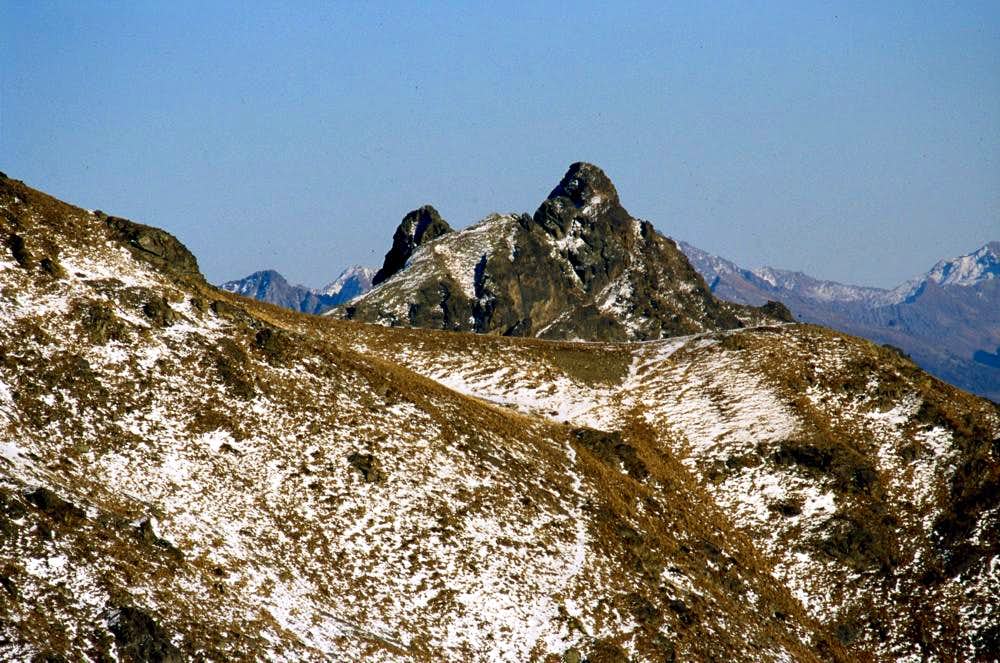 Southern Appendages at the end of Eastern Valleys, by Emilio Bertona.

Eastern Getting There By car: By plane:

All Eastern Central Valleys by Baltea to the North & some advice 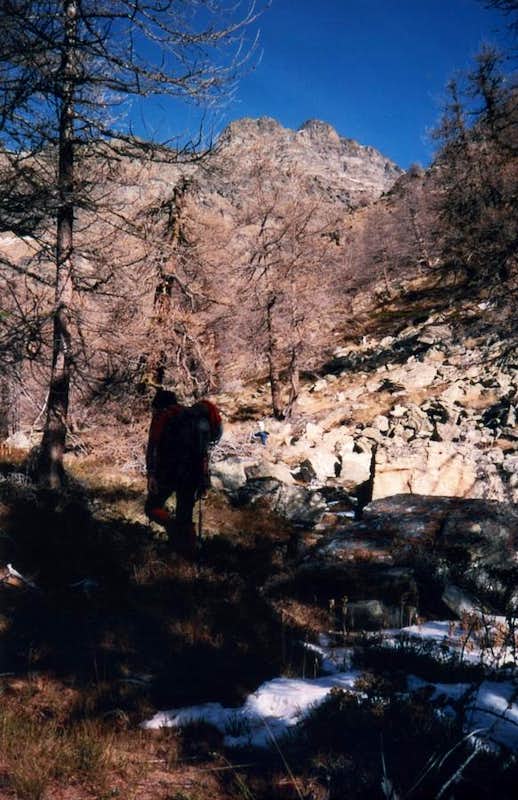 "Tsaat a l'Etsena the highest of this whole Area", by Osw
Also here to make contact and knowledge with this large area are enough half a dozen Trips. From the table here underexposed it can extrapolate what you want, but I'll try to give advice starting from the West (Roisan Common) to arrive at the gates of the Municipaly of Chatillon. From small Becca Roisan the watershed between the Central Valley of Baltea and Valpelline stands up to Becca Viou (2856m) and, after the eponymous Hill, reaches Mont Mary (2815m), now on the border between the Commons of Saint Christophe and Quart. There are three easy excursions where, paradoxically, the more tiresome is the one facing the Summit that is less high as that starting from Roisan Commune, passing in the first case to the Praperia or Praperiaz Pasture (1737m) and in the second from Blavy Village (1475m) by the first part of the farm dirt road to the Alpages of Viou (2078m, 2202m). We recommend the Becca Viou, traditional trip by Aosta, which, through the Hill of the same name at the "Bivouac Penne Nere" ("Black Feathers"; 2730m), which allows a more easy climb. If desired, from the hill you can do in a short time the pairing with the Mont Mary for easy Crest Northwest, on which, however, care must be taken in the presence of hard snow or ice (usually at the beginning or end of the season after the first snowfall, but also to Viou we must be careful to the fact that to get to the hill there are clusters of snow). To Mary can be reached easily by the opposite side, that is, starting from the Farm Prayon (1128m) and passing at the Village renovated Chamerod (1615m); or from Trois Villes-Avisod (1398m) that it reaches the Alp Sénevé or Cénevé (2206m) in the homonymous Basin. In any case, the final part takes place through the easy but boring Slope Southeast. Almost better the simple outing with Snowshoes to Alp. Over the whole basin are raised a series of Summit (Tête d'Arpisson, Tip Sénevé, the two Tsaat a l'Etsena, Beaks of Fana) interspersed with steep hills (Fana) or even more inaccessible carvings (Tsaat a l'Etsena and others) that are more dangerous for the bad quality of the rock, with very rubbles and often grass, that not difficult. Mountaineers have turned to experts and who know the territory. Yet all have already been climbed in winter, but it did not because it makes text made by Climbers very practical on the area. Better to avoid. Beautiful instead the excursions, starting from here, to the "Passo Alto" (High Pass; 2540m) or to the underlying Cornet Col (2280m). The first allows a fairly easy and safe ascent towards the Becchi of Fana (2951m) via the simple South Crest, while the second allows the crossing to the South in the direction of the Croix de Fana (2212m), just above Trois Villes. This is reached by small Villages Davisod or Fonteil with paths, or from Flemagne Pastures (1709m), now in Comba Dèche. The next watershed between Comba Dèche and to Verdzignola in Valpelline does not allow easy ascents for the same reasons mentioned above (Becchi of Fana, in the Eastern Tsaat a l'Etsena, Pointe Joseph Henry, Becca Conge), while the ridge that rises from Hill of St. Barthelemy towards this last is easy and safe with a fun final step above a notch. After Punta Verdona (2868m; easy but with an exposed section at the start) on the watershed of the right (East) which descends from Mont Faroma two easy trips to the Grand Pays (2726m) via Col Lèche or Lechy (2298m) or while continuing on the watershed and, after the Col Collet (2500m), the Becca d'Aveille or Avouille (2623m), above the Village Effraz (1478m). A short but delicate step between the antetop and Summit on North-northwest Ridge, where you have to use caution in the presence of new snow or ice (see photo at the bottom). Passing by the other side, then crossing over the Valley of St. Barthélemy, get the Appendices Southern of the watershed between the valley and the Valtournanche, above the large sunny Conca-Basin Verrayes and St. Denis. Easy trips lead us to Becca d'Aver (2469m) and crossing the nearby Cima di Longhede (2416m), both easy hikes earlier in the season and also with Snowshoes starting from Champlong Village, at the nice Pond Loson. While from the ancient Village of Grand-Villa (1423m) you can make beautiful walks to Mont Ander, Cols de Joux and Filone, instead from Champlong you can reach the Col des Bornes (1781m) with relative crossing towards Torgnon Plan-Proz Rion (1768m), feasible even in winter by Snowshoes. Always in Rackets, recommended by St. Denis-Semon (1359m) the "Tour de St. Evence" better at night and maybe with the full moon, rising from Col St. Pantaléon (1650m).
VALLEYS & small Valleys In order to deploy clockwise from Northern Valleys of Aosta/Saint Christophe/Quart/Nus/Chambave/Verrayes/Saint Dénis small Valleys & Basins to the Central Dora Baltea 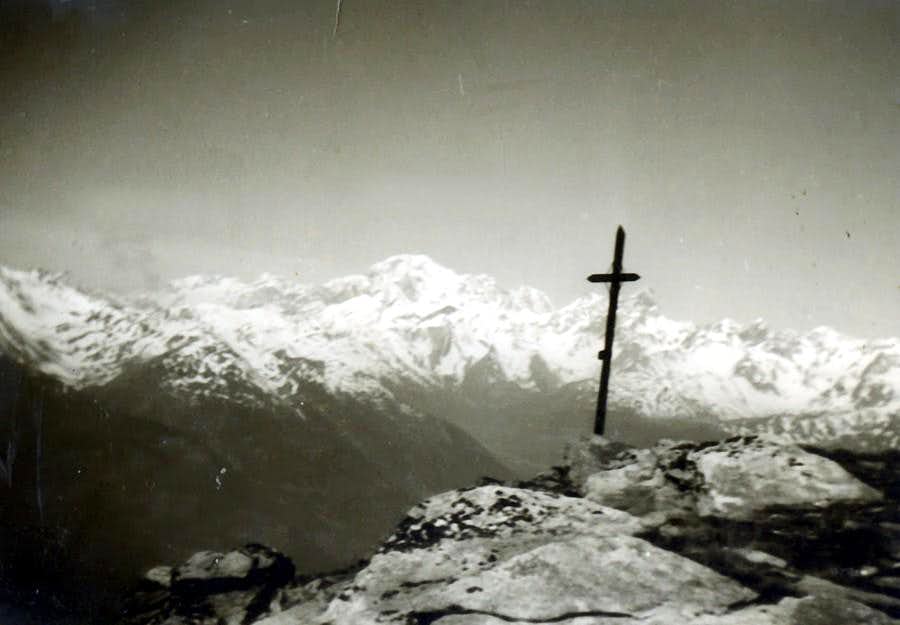 "Old Viou Becca above Aosta Town", by Dario Franco Sergio Cardellina
Viou-Mary Basin: from Aosta Town to Theuvex/Senin Fractions (766m, 782m) by Municipal Road; between the same starts North the path n° 26 to old Parleyaz or Parléaz Village (1274m; Napoleonic chimney, little Chapel). Continue into small walloon to Crete Pasture (1398m) and in West, before crossing little torrent, to Blavy Hamlet (1471/5m; nice tiny Church with beautiful sundial on wall); from this in North with path n° 25/105 to Varbre Pasture (1674m; ruins) and dirt road (from Roisan or Saint Christophe Municipalities) in altitude 1830 metres about. Crossing the same and torrent the muletrack turn East to Viou Pasture (2078m; source below the house); continue into forest reaching the Tsa de Viou Alp (2202m) and, in North after a morainic basin, Viou Hill (2698m), nearby Penne Nere Bivouac (2730m; always open), between Becca Viou (2856m)/Mount Mary. Cretallaz-Cerisolaz-Voltola(i)naz small Valley: from Saint Christophe Commune with Municipal Road to alternative above Lumian Village (894m); before leaving East the road to Crétallaz/Jeanceyaz/Morgonaz Hamlets, immrdiately after turn left or Northwest near a second fork 1350 metres around. Leaving West the continuation to Blavy Hamlet, turn North and through a long Northeast diagonal on dirt road reach Voltola(i)naz Hamlet (1492m), above Cerisolaz Village (1159m). 1)- Crossing various brooks in Northeast to walloon floor on main torrent; along the same (borderland Saint Christophe/Quart Municipalities) directly, pathless, go up in North on very wild small walley ("Death or Moon Vallon") to Mount Mary (2815m) Sourhern Slopes. 2)- (better) through a dirt above Parleyaz reach the thread of the long South-southwest Ridge and with rare traces to Summit. Senevé Comba: A from Saint Christophe Commune (573m) with Municipal Road to Sorreley (805m), Veynes (834m) Hamlets up to the alternative above Lumian Village (894m); leaving West the road to Parleyaz/Blavy Hamlets, continue in East to Crétallaz (1087), Jeanceyaz (1092m), Morgonaz (1205m) Hamlets and Prayon Farm (1128m; just after, signal no transit); from this with dirt road in North to Les Ayettes (1463m), Borelly (1477m), Chamerod (1615m), Les Preyes or Prèles (1802m) Pastures. Always before with dirt, after path, passing an old in ruins alp and through the forest on a round promontory, with a Northern diagonal route in terminal part to Senevé Alpages (2206m), below Mount Mary/Tête of Arpisson (2856m). 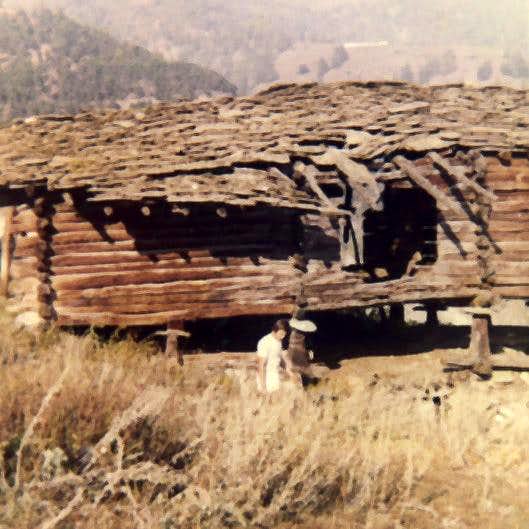 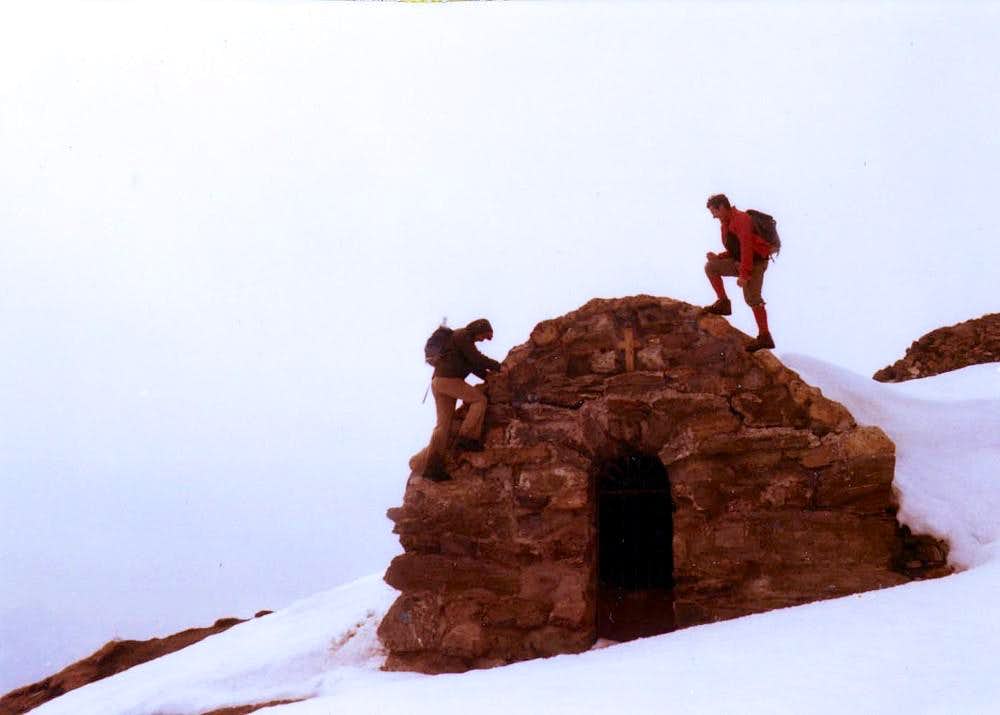 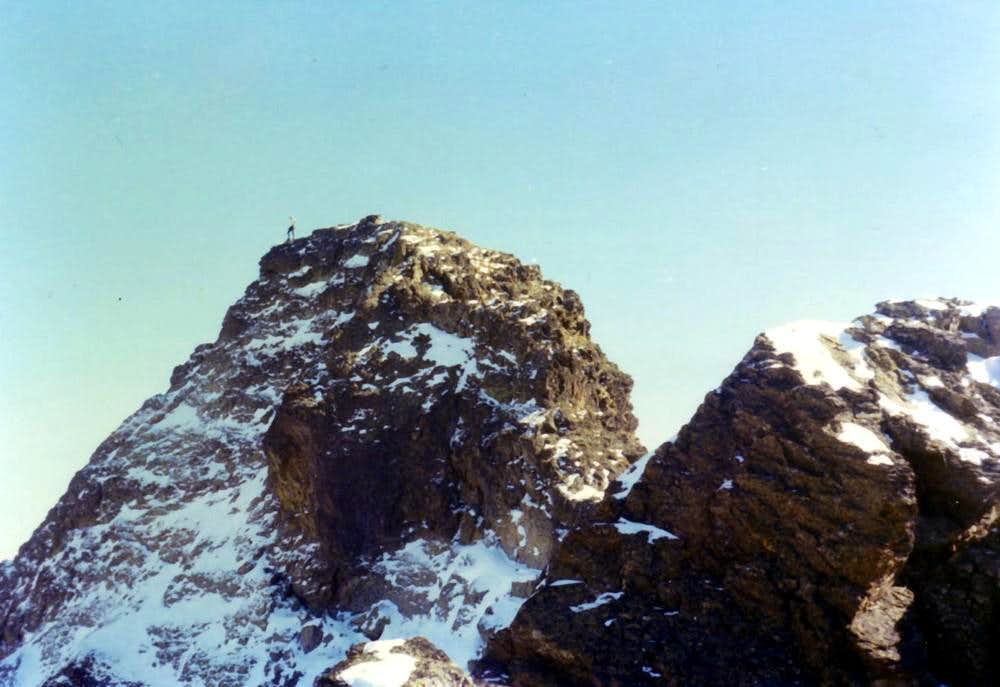