The group is located between Valpelline and Valtournenche, both in Aosta Valley.

Valpelline:
from the highway A5 Torino-Aosta-Courmayeur exit Aosta-East-Gran San Bernardo. So aside from Aosta highway SS-27 (E27), which reaches the valley of the Gran San Bernardo and arrives in Switzerland through the Tunnel T2, from Eutrobles and Saint-Rhémy-en-Bosses. Switzerland can also be reached through the Great San Bernardo pass, the road is open from June to October. To reach the Valpelline, you must exit always Aosta-East and therefore, arrived near the Arch of Augustus with the SS-26, take the SR-17 for Rosain.
Then follow the sign to Place Moulin dam, the parking place located in the high part of Valpelline and basecamp for numerous of excursions. From here the Grandes and Petit Murailess becomes visible. Valtournenche
from highway A5 Torino-Aosta-Courmayeur exit Saint Vincent and follow the signs to Cervinia. From Cervinia there are many possibilities and routes to reach and climb the Grandes Murailles. Becca di Guin 3.805 m
the normal route starts from Paoluccio bivouac on Col Budden (3.572 m) The bivy is approachable from Prarayer refuge located 1h from Place Moulin dam in Valpelline. The route is classified AD (quite difficult) and it requires crampons and ice axe to cross the glacier under the Col Budden.

• Punta Giordano 3.872 m
The first ascent on September 6th, 1877 by Lord Wentworth and guides J.B.Bich and Guido Rey from the south-west ridge. On August 19/20th, 1943 Siro Dandrea and Giuseppe Ghedina (guides from Cortina d'Ampezzo) opened the "Via degli Scoiattoli" (Squirrels route) considered the most difficult route on the Grandes Murailles chain.
The normal route to Punta Giordano follows the south-west ridge. For many risks of rocks falling it considered the most safe route Punta Lioy 3.816 m
It can be climbed from Valtournche or Valpelline by the support of the bivouacs Paoluccio (Col Budden) or Ratti (Col dei Cors) Punta Margherita (3.905 m)
The highest peak of the chain, it's located between col des Grandes Murrailles and Punta dei Cors. It consists of an 850 m ridge with many aiguilles from north to south. The first is the noth forepeak Nord (3.877 m); after 120 m there is the north peak (the highest). After others 120 m of ridge there is a deep notch prior to the south peak (3.902 m). Continuing for about 150 m there is the south forepeak (3.894 m). Normally Punta Margherita did not climb directly but during the crossing from north to south of Grandes and Petit Murailles.


Punta dei Cors (also called Punta Gastaldi) 3.849 m
It's a rocky tower on the main ridge of Grandes Murailles Murailles. It's formed by fraible rock especially on the top.
Its name comes from the pasture on its slopes (Valtournenche side). As Punta Margherita, normally it's climbed during the crossing of Grandes and Petit Murailles.
The first ascent on July 27th, 1877 by Giuseppe Corona and the guide J.P. Maquignaz. 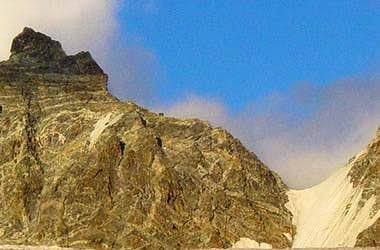