All right, as nobody has posted this famous panoramic peak yet, I am promising to start its page and maintain it regularly. Not much can be said about Eggishorn, except one thing - panorama. But this characteristic must be stressed to the highest possible degree. Of course, tastes are different, but many would agree, that Eggishorn offers one of the greatest panoramas in the European Alps. As I expect that pictures are arriving regularly, more about this in a special chapter.

Eggishorn is rising in a mountain chain, which is running on the Eastern and Southern side of the longest glacier in Alps - Grosser Aletschgletscher. In recent years this ice stream is losing contents. The level is lowering each year and the glacier tongue is retreating uphills significantly. But still, standing on its border gives you a great impression. From the Konkordia place, where several glaciers join, a long ice river is flowing down towards the Rhone valley. And the position of Eggishorn is lucky enough - standing just on the part, where Grosser Aletschgletscher changes its direction, it enables a free view along the whole stream. South-west of Eggishorn two neighbouring peaks are just a little lower, so forming a small subgroup: Fiescherhorn, 2893 m and Bettmerhorn, 2857 m.

For the Bernese group the mountain is not very high. It is still a hiking goal (a cable-car reaches the nearby fore-summit), only the last part requires to overcome some steep rocks. But the path is good and well marked. Actually the Eggishorn area is the final and highest part of the famous hiking area of Aletschwald and Bettmeralp, which lies even further towards the SW. From the Rhone valley a cable car arrives the plateau where beautiful alpine meadows are stretching along the whole chain. The place of the middle station is called Kuehboden, 2200 m. This area can also be reached by forrest roads. Along the mountain chain several marked trails go. As one of the trails goes also on the northern and western side of the mountain, above the Grosser Aletschgletscher, Eggishorn can actually be encircled, and this is a very attractive hike. From the south-east a marked path reaches also the summit.

Maerjelensee, 2324 m. North of the Eggishorn summit a beautiful high alpine lake lies. In times, when the level of Grosser Aletschgletscher was still higher, the water from this lake caused serious floods in the Fiescher Tal, but today it has considerably calmed down. The marked trail goes also to Maerjelensee. There are also many other options for outdoor activities, like mountain biking, paragliding etc. By using the cable-car in winter and spring also ski tours can be done.

Quite different is the panorama towards the south and west. Deep below lies the Rhone river valley and on the other side of it stand countless peaks of Uri Alps, Ticino/Tessin, Wallis Alps - all the way to the Mont Blanc group, with its monarch clearly seen as well. These mountain chains are beautifully seen, like on a parade, as their northern slopes are shining, covered with glaciers. But let's allow several pictures to talk... 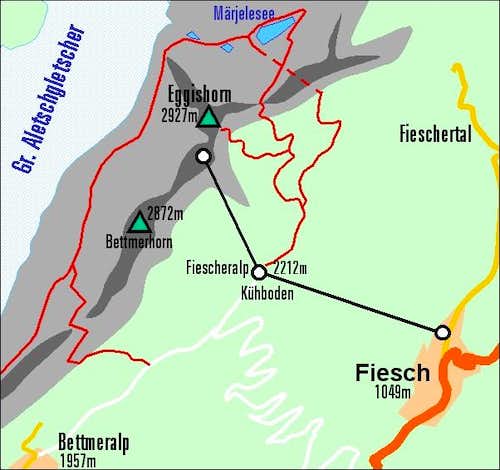 1. The summit ascent from Kuehboden, 2212 m. From the middle cable-car station we follow the marked trail towards the NE and N (direction Maerjelensee) and after less than an hour deter left (towards the NW) and ascend the summit. The last part is more steep, but otherwise there are no problems. 2 hours.

2. The tour around Eggishorn. Like #1 we start at the middle cable-car station on Kuehboden, 2212 m. From there we go in a clockwise direction. First towards the Bettmeralp, but the marked path keeps high enough to Bettmergrat, 2647 m. From there it's recommendable to ascend the fore-summit of Bettmerhorn, 2786 m and come back (30 min). Now the glacier trail is ahead of us (Gletscher-weg Aletsch). We descend down to the glacier, follow it to the rocky corner of Eggishorn's NW ridge, go around and reach the Maerjelensee, 2300 m. Then through Taelligrat-Stollens to the E side of Eggishorn and back to Kuehboden. Altogether 5 hours.

The starting points for ascents are in the Rhone valley, around Fiesch. We probably will not walk all the way up, but if yes, several forrest roads and marked paths go up. The town of departure is Fiesch, 1050 m, at the mouth of the Fiescher valley. There's also the bottom station of the cable-car to Kuehboden and the summit. The cable-car drives every 30 minutes, for details see the official http://www.eggishorn.ch/ page.

The other option to reach Eggishorn is from the south-west, along the main ridge. Trails go from Bettmeralp, 1948 m, which can also be reached by a cable-car. This area is broad enough (and beautiful enough) also for a two day hike (or more).

Eggishorn can be best climbed in dry seasons - in summer and autumn. cable-car drive can be done in any season, of course.

Using the cable-car, Eggishorn can be reached in no-walk or in half a day walk, so no sleeping on the mountain is needed. Also the round tour can be done in one day. On the plateau and on lower regions by the Grosser Aletschgletscher there are many hotels. As this is not the tourist site I shall not name them. Also down in the Rhone valley there are many hotels and camping places. The whole area is touristically very developed. Eggishorn is a typical mountain on which people climb on a chosen nice day to enjoy the panorama and then descend on the same day.

When we ascended the summit (far back in 1989), we had a perfect day. That's why I'll never forget that panorama. But as many pictures are decayed, I can today hardly post any good one here. Please add more!