Glittertind is the second highest mountain in Norway, located in the spectacular Jotunheimen area, 125 northwest of the famous ski resort Lillehammer. It rises immediately east of Norway's highest summit, Galdhöpiggen (2469m). According to the most recent official elevation it is only five meters lower than Galdhöpiggen, but its height varies depending on the depth of its summit snow and icecap. Galdhöpiggen's summit is rock so sometimes Glittertind is supposedly the higher of the two. In earlier surveys Glittertind was measured as the higher of the two mountains. The peak is one of Norway's 198 peaks over 2000 meters. A huge majority of these are located in the Jotunheimen area, including all over 2300m.

Most of the walk-in is on glaciers and in the colder seasons the way can be travelled on skis. The glacier isn's that broken up, but there are crevasses and it can be a good idea to rope up. A good starting point is from the mountain station Spiterstulen, which is a good but expensive base.

The peak was first climbed in 1841 by Hans Sletten and Harald Nicolai Storm Wergeland. Via its normal route, it's an easy walk up and no technical difficulties to encounter. 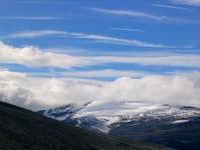 "Walks and Scrambles in Norway" by A. Dyer et al is an English language guidebook that covers Glittertind and several other peaks in the area. ISBN 978-1904466253