Hægefjell is a magnificent granite dome tucked among the small but rugged mountains of the Telemark region of Norway.  It has one of the best, easy, all naturally protected, multi-pitch routes in Europe where many a neophyte climber has had their first experience in multi-pitch trad climbing.  Hægefjell has the typical aspects of a great granite dome anywhere in the world.  There is the steep south face with long hard slabs, and steeper fine cracks.  To the southeast and east are more gentle slabs with moderate slab climbing and connecting of discontinues cracks.  To the west is the walk-off, which is a popular hiking trail in it's own right. 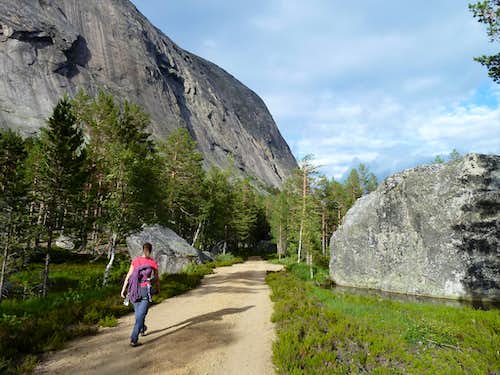 South face of Hægefjell as seen on the walkout among the boulders.

At the base of Hægefjell is a boulderfield made for climbing.  There are perfectly flat, sandy, or slightly boggy landings, and clean faces and aretes to explore.

Though Hægefjell is the star attraction, it is surrounded by many other smaller domes and walls, which have seen various levels of development.

I wouldn't want to spoil the fun of discovery, so here are some basic driving ideas.  The large lake called Nissevatn (Elf Lake) has a small town at it's end called Treungen (3 Kids).  This is the destination you are headed for.  To the north of Nissevatn is E134, to the south is E18.  E134 is a bit longer and more scenic.  E18 is more direct but has heavier traffic.  Either way, you are heading for the local highway 41 which skirts the eastern shore of Nissevatn.  Hægefjell is on the opposite shore.  To access it, drive to the western shore from Treungen, which is at the southern end of the lake.  There is also a small ferry that crosses Nissevatn a little further north than the halfway point.  Although Hægefjell is positioned at the northwestern edge of the lake, there is no access from the north.  Once on the western shore of the lake, drive to the Y crossing and stay left.  Soon the road rises as it follows a stream past several beautiful farms, and quickly changes to dirt.  Follow this road for longer than expected, around 13 kilometers, pay the toll and continue until the road is blocked at a parking lot.  If you can't see Hægefjell from the parking lot, you did it wrong, as it towers directly ahead. 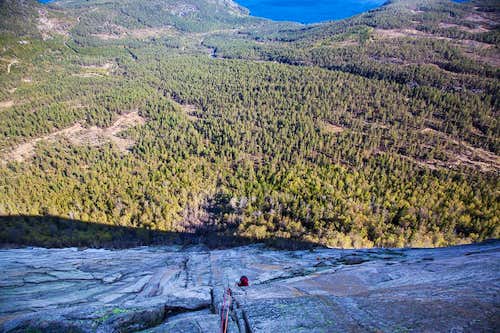 Nikolaj Hansen on the huge slabby face of HÃ¦gefjell.

By far the most popular route is the 5.5 Via Lara.  You can't really get off route, the climbing is consistent, fun, easy, and since the standard climb starts two pitches up from the base, it gets some nice exposure quickly.  As a purely trad, easy climb it's hard to beat.

The south face has many 5.11 and up slab routes on the left side.  The middle and right side has steeper climbs, but laced with long clean cracks.  One of the most popular routes on this section is Mot Sola (Against the Sun). 5.10a.  There are few routes easier than Mot Sola along the entire aspect.  There are a few routes in the 10.easier range around the right on the southeast face, on the way to Via Lara, but route finding can be tricky as they are slab climbs that link features and cracks with some slab wandering in-between.

Finally, the hiking trail, or for climbers, the walk-off descent is popular, and encircles the mountain following around it's south side, and going up the easy western slope.  The well marked trail is easier, the climbers walk off is steeper and rougher, (faster) and more closely follows the southern edge of the formation. 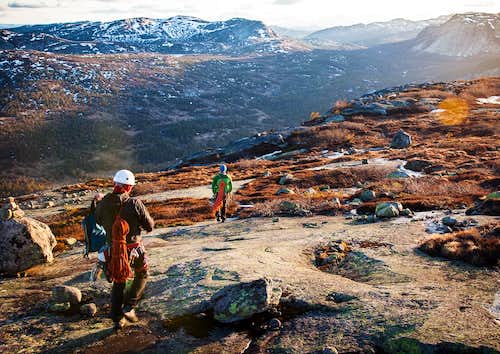 The best choice for the visiting climber is the mini-guide from RockFax.  Nissedal Mini-Guide 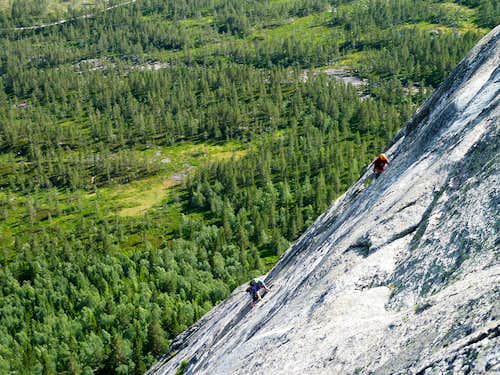 Climbers on Agent Orange, a .10b route close to Via Lara

There is a fee for use of the road to Hægefjell.  One must pay cash, and keep the stub from the envelope visible on the dashboard of the car.  Since it's a long drive, it's important to have some cash on hand before heading in.  My apologies for not remembering, I believe last I checked the fee was 60 kroner.

May can be soggy from snowmelt, but not so buggy. June can be rainy and buggy.  Same for July but getting better.  August and September are sublime.  October the days get shorter and colder quickly.

There is primitive camping around the reservoir and parking area.  There is a small fee for camping in established areas, on a volunteer payment basis.  Some cheap folks hike a little further out and go primitive and free.  There is a pit toilet in the parking\camping area.

If you are climbing and exploring other areas, there are excellent commercial camp grounds all around Nissedal and the lake, with daily fresh bread, showers, laundry, the works.  Most campgrounds are on the eastern shore, but there is a tiny ferry that can cross over to the Hægefjell side of the lake.  There is one good campground on the western shore, closer to the community of Nissedal.  It's called Nisser Hyttegrend and has cabins to rent as well as campsites.