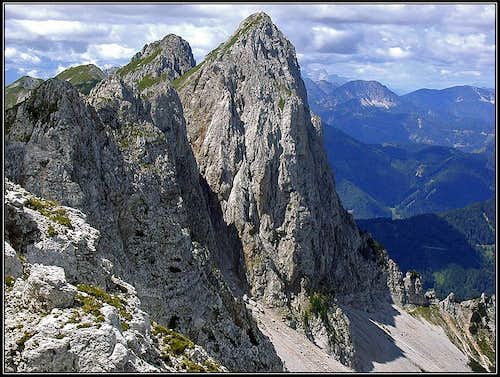 What's new on this page?

The name of the range is very old. Alredy Claudio Ptolomeo (Claudius Ptolemy) refers to it as: Καρουάγκας (karuankas). Some scholars see its origin in Celtic language. "Kar" is a rocky area and the neighbouring Carnic Alps might have a similar origin. The group I am describing here is named Karavanke in Slovenian language, Karawanken in German and Karawanks in English.

The purpose of this page

On this page I would like to summarise information, common to all summits of the range. Gradually important mountains have been receiving their own pages. Please add all specific information there, not here! 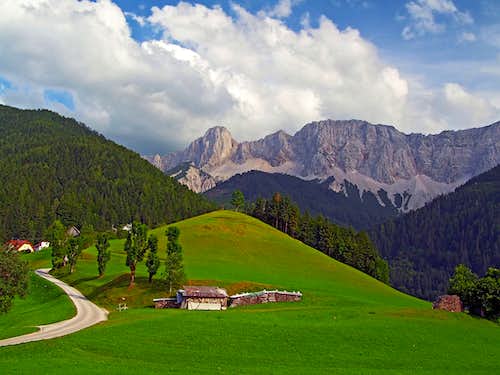 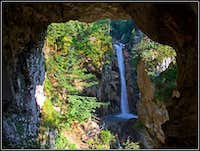 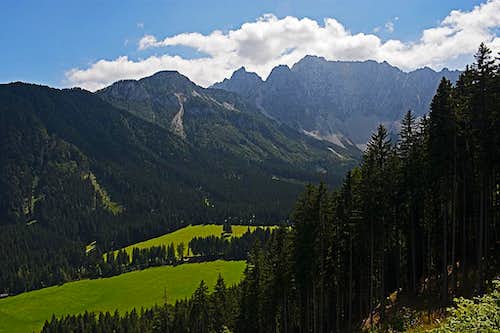 The valley of Bodental / Poden

In the not so distant past it was said that the Karawanks mountains are separating Slovenian people who are living south of the range from those who are living within the Austrian state north of the range. Later, when political relations warmed, it was said that the Karawanks mountains were connecting the German speaking people north of the range with Slavic people south of it. And today, luckily, all this political rhetoric is becoming more or less irrelevant. If mountains were not there, people would merge and communicate even more readily, as they are where they are, we both climb them and meet on their summits. And it's all well again, as long as European Union is fair to all the constituent nations.

The Karawanks belong to Southern Limestone chain of European Alps. They are similar to Carnic Alps, Julian Alps or Kamnik Alps, although they are a bit lower, so many of their important peaks are grassy on southern side and rocky only on northern side.

The whole range stretches about 120 kilometers in the west-east direction. They begin on Megvarje vrata / Maglern Thoerl on the west and finish with forehills around Slovenj Gradec town. Northern border of the range is clear - it lies on Drava/Drau river. On the west, southern border is Sava river, but soon after Jesenice town the Karawanks range starts to hide behind Kamnik Alps (from our, southern perspective, of course). So from this point the southern border of the chain is hard to be described, it is evident from the embedded Google map below.

The Karawanks range is a paradise for hiking and tour skiing. Almost all summits can be reached by marked paths. Summits offer wonderful panoramas, especially on Julian Alps and Kamnik Alps, which are close, while towards the north views are far more open - till Grossglockner and Dachstein. In the range there are also some climbing areas. 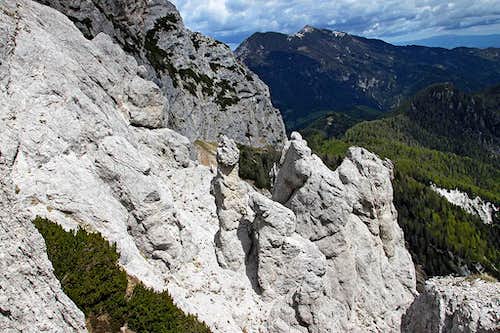 Rock towers in the E face of Tolsta Košuta

The big periadriatic fault (on the bove picture red line, going just south of Eisenkappel) is actually cutting the long W-E oriented group into a roughly northern part and southern part. The fault is coming from the west by the valley of Gail/Zilja, then goes by the northern side of the Karawanks, but in the narrow group of Stol it goes by the northern side of Stol, Vrtača, Košuta, and then over Šajda saddle and Eisenkappel valley towards the east. Only the southern part of Karawanks (the highest mountains - white triangles on the map) geologically belongs to the Southern Alps, and has to a certain degree similar lithological structure. The northern part (Obir, Peca,...) is in the upper part also built of Mesozoic rocks, but belongs to the Austroalpine nappe, specifically to the "Drauzug" ("Drau Chain"), so its history of sedimentation is similar to the one of the Northern Limestone Alps. In between, in the vicinity of the Periadriatic fault (around Eisenkappel) a stretch of metamorphic rocks is unearthed (granit, tonalit, diabase, ...) and more towards the east also a stretch of volcanic rocks can be found.

Only the summits of Karawanks mountains are built of Triassic limestones (and partially dolomites). These are superimposed on older paleozoic rocks. The latter are in the very western end of Karawanks forming also the rounded summits (Peč), similarly as in the nearby (across Ziljica river) Eastern Carnic Alps. More towards the east Paleozoic rocks can be found mostly in the valleys and around geological faults. The exception is the broader area W and N of Jezersko (Stegovnik, Virnikov Grintovec, Pristovški Storžič, ...). On these, Devonian limestones are forming also the summits and ridges, being thrusted over younger Carboniferous flysch layers. By its geological diversity and abundance of fossils, Dovžanova soteska (canyon) is worldwide known. The highest summits of Karawanks are made of Triassic limestones and partially of other limestones and dolomites. Several hundred meters thick layers (Wetterstein, Dachstein limestone) are lying on Carboniferous and Permian layers. This is the highest thrust of the chain. The lower thrust can be clearly seen even more to the south. All the way from Kranjska Gora on the west towards Boč on the east, you can see rock structures thrusted from the north (so, having short, steep southern walls). Those hills are by origin of course much older, from Devonian to older Triassic era. On the south, the Karawanks are being bordered by the Sava fault. More to the east, the Southern Karawanks are closely connected to the Kamnik-Savinja Alps, another Southern Alps group, which is however even a bit younger by origin and also geologically more homogeneous.

The Karawanks range offers just something to everybody. Not a big, famous resort, which would be very popular across Europe, but in many areas still peaceful and with preserved nature. There you can do:

If you have time only for a weekend or so, then know the Karawanks by visiting their central part. Drive from the Austrian side into Baerental and continue below the north face of Stol/Hochstuhl. Any time of a year, there you can do a nice tour, in summer conditions also a round trip, including the highest summit.

As there are no evident subgroups, I shall list here the important summits from the west towards the east. Because there are some passes, which cross the Karawanks range, summits will still be grouped. The summits, which have their own SummitPost pages, can be seen on the map below. Click on the marker of a mountain and then on the link to open its SP page.

View The Karawanks in a larger map 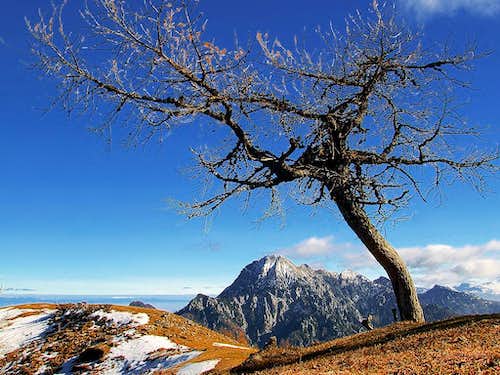 Kepa from the west, from the summit of Mojstrovica 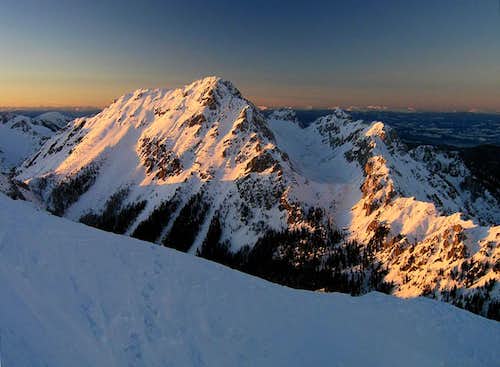 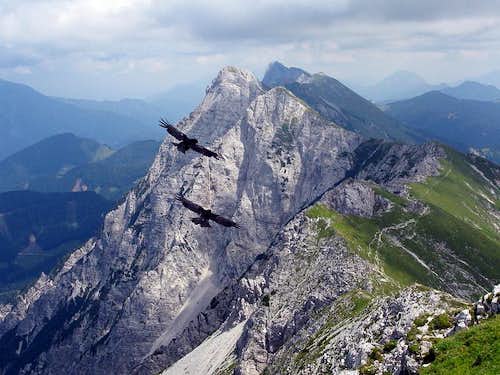 See the page Mountains of Slovenia to read the discussion about the hilly range in the SE continuation of the Karawanks. 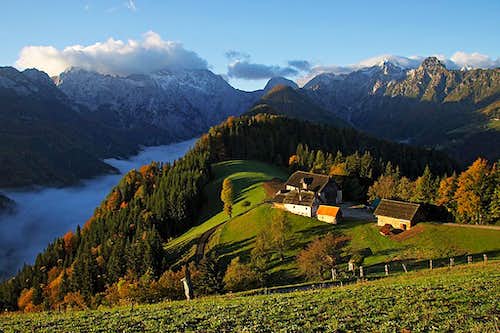 The Karawanks are also great for biking tours. In this chapter I'll list only a few. When the list gets more complete, I might do a special page. 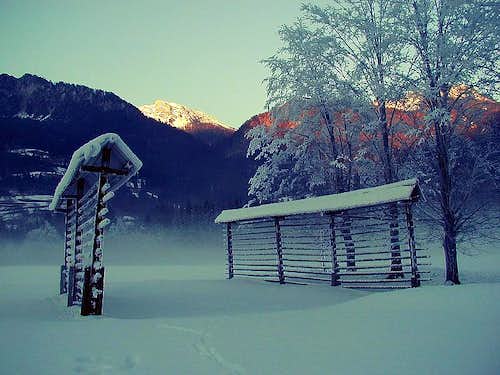 By plane. The nearest airports are:

By bus. There are regular bus connections along Sava, Drava and Savinja valleys and over passes Korensko sedlo / Wuerzen pass, Ljubelj/Loibl pass and Jezerski vrh / Seebergsattel.

By car. See the map.

Maps. You can see a detailed map on: Austrian: http://www.austrianmap.at/. Slovenian: www.geopedia.si/. As of classical maps, you can refer to: Karavanke, 1:20000. Planinska zveza Slovenije, or Karavanke, Central part and Grintovci, 1:50000. Planinska zveza Slovenije. Kranjska Gora (community tourist map), 1:30000 (only for the western part to Rožca/Rosenbachsattel saddle).

The Passes of Karawanks

Even before the Antiquity, trade routes, overcoming the range and thus connecting the Adriatic with Central Europe were important. Let's only mention a few historical passes.

Important already in Antiquity, it gained importance in the 16th century, when its bridle path was broadened into a road, which was renewed in the 17th century and in 1944, when the tunnel was opened.

Other passes are less important. Korensko sedlo / Wurzen Pass*** is situated on the very west of the range. Pavličev vrh / Paulitsch Sattel**** is the connection only between the valley of Savinja and Eisenkappel. On the very east, around the massif of Peca the south-north connection through Mežica cuts the range.

No limitations. For a few private roads on the Austrian side you must pay toll.

In summer best months are from start of July till end of October. For tour skiing the best months are from December till April. First snow usually falls in November, in certain areas skiing is possible till start of May. For tour skiing almost every summit of the Karawanks is appropriate. For climbing the best resorts are: - north faces of Stol group and Vrtaca group - north faces of Kosuta 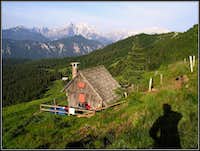 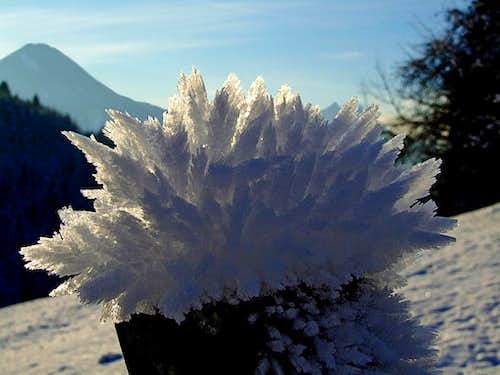 In valleys there are many tourist resorts. Along the whole Karawanks range there are many mountain huts, the most important are named below. In the massif there are no useful camping places.

Huts (from west to east):

The Older History of This Page 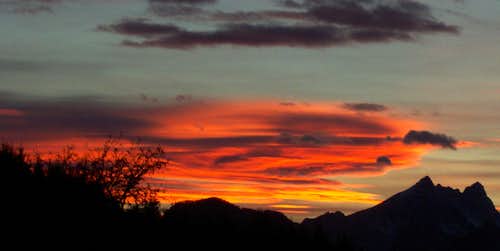