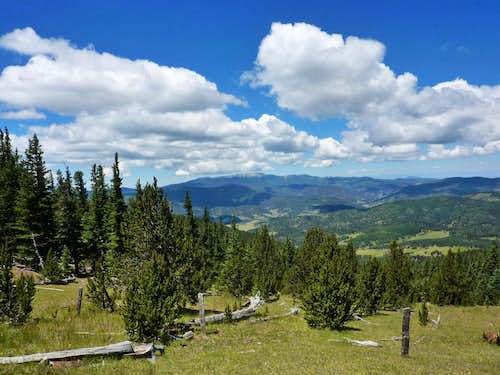 From the summit there are spectacular views all around, including the East and West Spanish Fork Peaks, Culebra Peak (southernmost 14er in Colorado), Wheeler Peak (highest peak in New Mexico), Baldy Mountain and Ash Mountain. Aside from the views, the solitude found on this peak is amazing. This peak is not often climbed . The majority of Little Costilla's visitors are either on a Rayado Trek at Philmont Scout Ranch or are staff at Philmont. 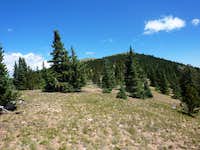 The route to Little Costilla looks straightforward, but it really isn't. Its a bushwhack to tree line. Most information I have seen about this peak say to park at the Corrals and then follow the fence along the ridge to the summit. Okay, sounds easy enough, but why are there 30 different fences with game trails all around on this mountain? I don't know why, but I do know that if you follow the ridge, you get to the summit- thats what I did after trying to follow thee "fence". With that being said, park at the Corrals. Then, pick a somewhat established trail (and they all appear next to fences) and head out on it. Keep working your way up through dense trees and scrub on the west face. There is a huge saddle around 11k. If you see that, you want to head up to the west. This will get you to treeline and then from there, its easy hiking on the alpine tundra to the summit.

Note: There seems to be one route that is fairly well established on this peak. It is hard to find from the Corrals, but above treeline, its easy to find. We saw it when we were going up and then took it on the way done. You will pass a bunch of fences on the way to this peak, however, there is one fence that lingers past treeline along the ridge. If you follow that fence on the way down, a defined trail forms and it will put you out on the Valle Vidal Road (FR 1950) just west of the Corrals. Then you hike up the road for about a half mile and then your at the parking. I would recommend to start from here, however, there really isn't a place to park and its hard to find. So thas another alternative

truchas says: I drove the road until it reached the long southward
sloping ridge. I parked on the side of the road (plenty of room) and hiked
straight up the ridge. There was only 1 fence so it wasn't confusing at
all.

In northern New Mexico and Southern Colorado, Costilla has long been a common name. Spanish settlers gave the name Rio Costilla to a river that came drained a large valley just north of Taos. That valley lies at the base of Little Costilla in the Valle Vidal. Costilla Reservoir now dams part of the river in that canyon. From there, the Rio Costilla flows into Southern Colorado, into what is now Costilla County.

If there is a Little Costilla Peak, then there should be a Big Costilla. Big Costilla lays across the valley, on the other west side of the Rio Costilla. There are a few interesting things about this peak. The first interesting fact is that Big Costilla is not an actual peak. Running north to south is a massive and wide ridge above 12,000ft. What is interesting is that there are 4 ranked New Mexican peaks above 12k on that ridge, yet Big Costilla isn't the highest. The highest point on that ridge is Peak 12931, which is just south of Big Costilla, which comes in a second for that ridgeline. The other interesting thing is that this whole area is privately owned by the
Rio Costilla Park, which is a cattle/hunting/fishing ranch off limits to the public. The Rio Costilla pretty much starts on the border of Colorado and then runs south through the Valle Vidal. Then it goes along NM 196 and then goes back up north to Colorado. Pretty much everything in between that "U" shape is owned by Rio Costilla Park. I tried to contact them about hiking and they said "it is off limits to the public". Bummer...

This area can not be accessed during the elk calving season, which runs from late spring until the end of June. (Contact the Carson National Forest at 505-758-6200 for further enquiries.) However, on July 1 all trails are open to hikers. No permit is needed to camp in the area, but groups are restricted to a maximum of ten people.

Also, I doubt that the 40 mile dirt road to the Corrals (the trailhead) will be plowed in the winter.

Click THIS LINK for current conditions regarding area closures and road closures. 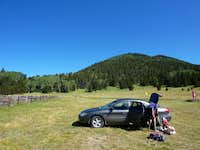 This peak is physically accessible year-round, and can be done in a day. There are some larger snowfields that reside on the east side in the spring and earlier summer. In the summer months, this area gets hammered with monsoonal thunderstorms. Although amazing to witness, these storms can be quite deadly. Know the conditions before you go up and DON'T remain above treeline in a thunderstorm. The summit will always be there.

It is possible to camp on the summit, though rain is highly likely during the monsoon season, and temperatures drop considerably at night. However, Elk Meadows, which is at the base of the mountain's east face, offers an incredibly serene place to stay, and I highly recommend exploring the gigantic meadow as well as the surrounding peaks of the Ash mountain range. Also, you can camp at Clayton Corrals (at the base of Little Costilla's south ridge). Shuree Ponds Campground is also close by. All of this can be accommodated into a full day's hike.

Click THIS LINK for more information regarding camping within the Carson National Forest. 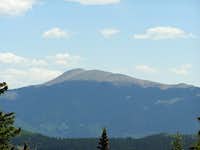 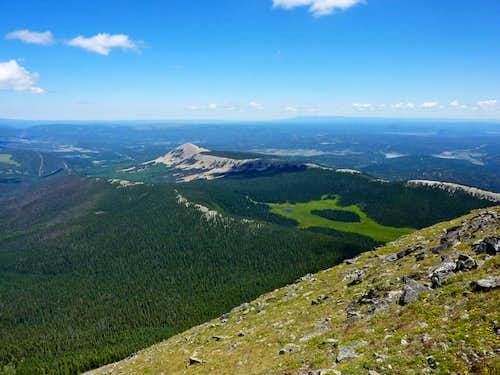 From either Denver or Albuquerque, it will be about a four to five hour drive to either Questa or to Raton. Cimarron is the closest town (which is where Philmont Scout Ranch is located).

From Raton- Head south of the 85. Get off at Hwy 64 and follow that for a long time. At around 30 miles, take a right on Forest Road 1950. This is a dirt road that you will follow for almost 40 miles. The sign says 20 to the Valle Vidal, but its 20 more after that to the Corrals. You can easily take a car on this road, its just long. You will start to see Little Costilla appear. Go past Shuree Ponds. You will reach a saddle (the highest point of this road) and that is where the Clayton Corrals are at. Park here and hike.

From Cimarron- Head east on Hwy 64 for about five miles. Take a right onto Forest Road 1950. From there, its the same directions as above

From Questa- Take NM 522 to the village of Costilla (20 miles) take a right (east) on NM 196 toward Amalia at the Shamrock gas station. The pavement will end after Amalia. Keep going past Rio Costilla Park and past the Carson National Forest boundary. The road is now marked FR 1950. at about 21 miles take a right at the junction. follow this good dirt road about 9 miles to the "trailhead" at the Grassy Creek drainage.

From Questa New Mexico take NM 522 to the village of Costilla (20 miles) take a right (east) on NM 196 toward Amalia at the Shamrock gas station. The pavement will end after Amalia. Keep going past Rio Costilla Park and past the Carson National Forest boundary. The road is now marked FR 1950. at about 21 miles take a right at the junction. follow this good dirt road about 9 miles to the "trailhead" at the Grassy Creek drainage.

Thanks for the info! I put it on the page. Check it out!

Monsoons can bring heavy rain and cloud cover to the mountain in August. These factors can hamper navigation & safety. BEWARE!

I noted that. Check out the new page!

Excellent guide to the mountain but I think you meant "elk CALVING season". The mating season is in the Fall.

Re: A minor correction

Thanks! I noted that on the page.

Some good information about the Valle Vidal, in which Little Costilla resides, can be found at this link (current as of 8/28/10; link may need occasional updating).

Thanks for the heads up! I'll ad it on the page. Thanks for stopping bye!