Few peaks match the awesome grandeur of Sierra Blanca. At just below 12,000 feet in elevation, Sierra Blanca looms intimidatingly large from the sandy deserts and rangelands that surround the compact range. From some vantage points there is nearly 8,000 feet of elevation differential bewteen the viewer and the summit. Its snow-capped summit is visible well into the summer, from the sizzling deserts below. 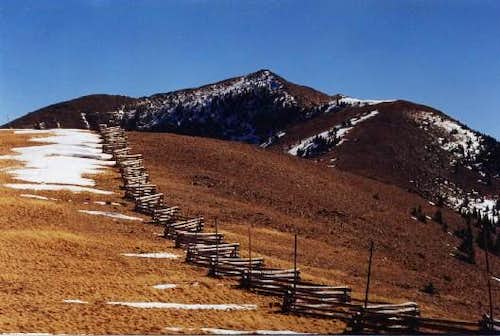 Saddle to Sierra Blanca (by Jessicahiker)

From Ruidoso, drive north on highway NM-37 a few miles and turn left onto NM-532, following the signs to the Ski Apache complex. Follow the road to near its terminus. You will likely arrive in the pre-dawn, and park along the highway near the trailhead of trail #15. This is at the last turn before entering the ski complex, which will be gated shut during the night. From Ruidoso to the trailhead it's about 15 miles.

Well... the actual summit of Sierra Blanca lies on the Mescalero Indian Reservation. Technically one needs a permit to hike on Indian lands. The town of Mescalero on US-70 about 15 miles south of Ruidoso might be a good place to inquire. Or, you can simply just hike the peak and take your chances. Judging by the quantity of names in the summit register, I suspect most people do the latter. Use your best judgement.

Snows should be gone by July, and return about late October. Thunderstorms are a daily likelihood for most of July and August. September and October are usually very dry. Get a pre-dawn start if you go up during the monsoon (July-Aug).

For snow climbs, I can't comment. The final ridge is steep with rocky obstacles so even a bit of snow or ice could make it challenging.

(Regarding Lookout Mountain: this lies right in the ski complex and is very nearby a ski lift. In winter, one could ski-step a few feet up the slopes to the seating area (you read correctly) on the summit) Saddle to Sierra Blanca (by Jessicahiker)

There are campsites sprinkled throughout the region, including some on the road up.

Recent letter from Mescalero Tribe Council explains that climbing Sierra Blanca is no longer allowed due to mountain being a sacred site, etc. Last year my request to hike was refused because of the drought conditions, now apparently no climbing permitted whatsoever. slowbutsteady

However, when I made the summit on May 15, 2014, the summit mailbox had a nice notebook full of names and dates well after your 2007 post. Officially, Sierra Blanca may not be permitted, but I wouldn't let that stop anyone, as the evidence is that visitation is relatively frequent.

Summited 8/18/15. Climbed up the Ski Apache maintenance road to the top of the lifts (1900 vertical - about an hour). About 0815 talked to a young man (who I suspect was Mescalero Apache)doing maintenance on the top of the zip line. I asked where the short trail was up Lookout Mountain, which he pointed to, then he said "if you really want a view you should climb that", and pointed to the summit of Sierra Blanca. We chatted for a few minutes about the climb, and I thanked him and headed to the summit via Lookout. About an hour later arrived at the summit. Dozens of posts in the summit register. Hike was uneventful. Well worth the effort. By the way, the Ski Apache web site advertises that if you hike up, the ride back down (in the gondola) is "on us". It was a very pleasant 15 minute ride back down from the top of the lifts. I believe Ski Apache is owned/operated by the Apache tribe.

****UPDATE: READ BEFORE ATTEMPTING TO CLIMB****

I attempted Sierra Blanca on May 6th and was turned around by an individual on an ATV. There are a few issues with climbing Sierra Blanca. 1. It is on Tribal lands and it still is technically off limits. in the mans words, "You need to call to get a permit but the tribe doesn't give permits". 2. As of May 6th 2022, there is a fire ban in effect. The man said he would have let us continue if it had not been for the fire ban. Once you cross the wooden fence from the ski resort to the other side, you are technically on the tribal lands. It sounds like things are more lax when there isn't a fire ban but know you might get turned around if you make the attempt.