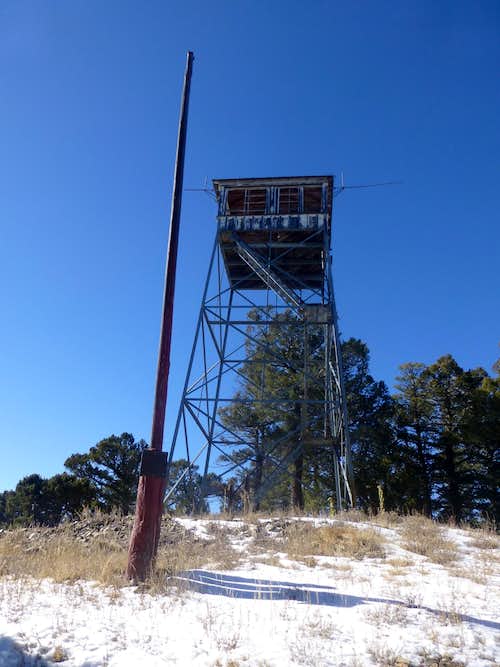 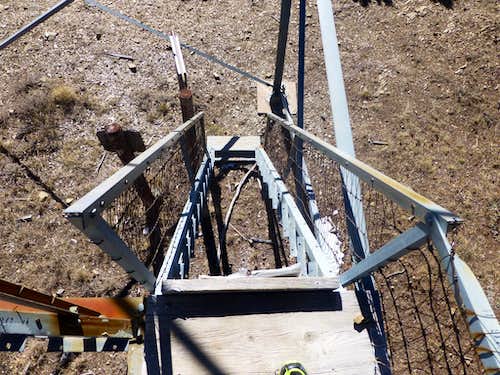 Third class scramble
Thompson Peak is a broad, forested mountain at the very southern end of the Rocky Mountains.  While less popular and scenic than its higher neighbors to the north, such as Santa Fe Baldy, Tesuque Peak, and Lake Peak, it offers pleasant and uncrowded hiking a short drive from Santa Fe.  The best part of climbing Thompson is probably visiting the old fire lookout near the trailhead on neighboring Glorieta Baldy.  Built in 1940, it is no longer in use and officially closed, but still structurally sound, and is a short third-class scramble from the summit of the peak itself.

"There," in this case, is the picnic area and trailhead near the old fire lookout on Glorieta Baldy.  There are three ways to reach this trailhead.  First, lazy people with high-clearance vehicles can take the Glorieta Baldy Road.  From Santa Fe, take I-25 north (actually southeast) to exit 299.  Follow state road 50 east, then turn left on county road 63 A toward La Cueva.  Continue through La Cueva, where the road becomes Forest Road 375 and turns to progressively worse dirt.  Stay on the main road, and you will eventually reach the picnic tables a hundred yards or so from the lookout.
The second approach is to follow the Glorieta Baldy Trail from the Glorieta Conference Center.  See "Red Tape" below. 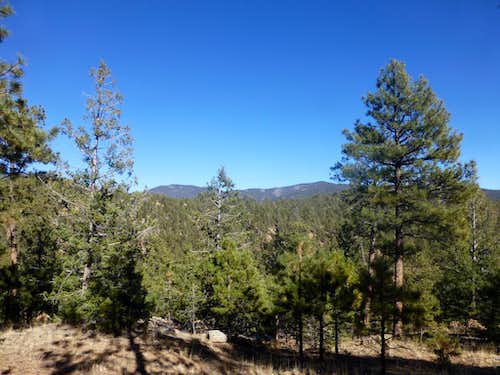 Thompson and Glorieta Baldy from near Arroyo Hondo TH 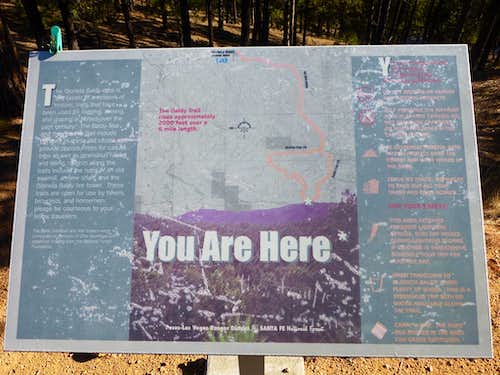 Informative placard
The final approach, via the Arroyo Hondo trailhead, adds 6.4 miles each way.  This trailhead is at the end of a graded dirt road, which would be slow going but probably passable in a passenger car.  The road can become completely impassable when wet, adding another 3-4 miles each way to the approach.  From Santa Fe, follow Old Santa Fe Trail southeast as it climbs away from the Interstate up Piedras Negras Canyon.  Stay left at a "Y", and continue through the strange and tiny town of Cañada de Los Alamos, where the road becomes dirt.  Stay on the main dirt road, bearing left and up a steep hill at a split at the bottom of the ravine, then left at a narrow "Y" on the ridge.  Follow this road for several miles as it winds up a broad ridge.  Park in the signed parking area at a 4-way intersection.  While you could drive 1/4 mile farther to a gate, turning around would be a problem. 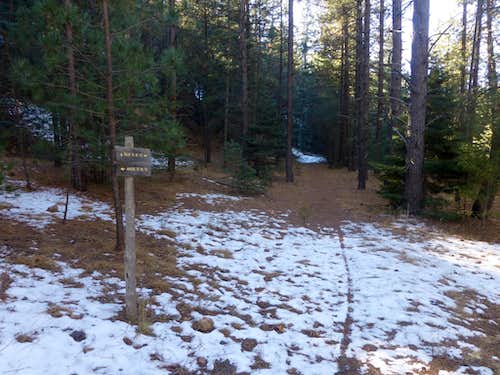 Apache Canyon junction
From the parking area, take the right/east road through a gate to a large didactic sign at the start of a maze of roads and trails.  The most direct route turns right at the sign, following the ridge south to a cairned trail that switchbacks down into the valley to the east to reach another old dirt road.  Turn left on this road, and follow it as it winds in and out of several ravines.  Look for a somewhat subtly-signed single-track trail continuing straight at one of the road's leftward bends.  Follow this trail as it descends to the bottom of Apache Canyon, then heads left up-canyon to another large sign at the junction of the Baldy and Apache Trails.  From here, follow the trail as it climbs nearly 2,000 feet up a spur ridge to Glorieta Baldy's main south ridge, then continues a more gradual climb north to the lookout. 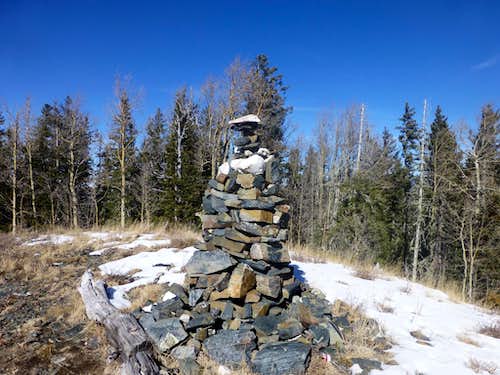 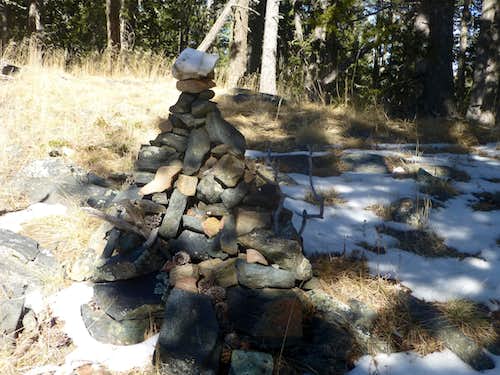 False summit cairn
Since Thompson Peak is bordered by the closed-to-everyone Santa Fe Watershed to the north and west, and unpleasantly dense and trail-less forest to the east, any route will finish via the faint 1.5-mile trail north from the picnic tables at the end of Glorieta Baldy Road.  The trail stays generally near the crest of the ridge, crossing over a few minor sub-summits. Don't be fooled by a cairn at the final, forested subpeak!  Instead, continue along the wooded ridge to a person-high cairn in a small meadow on the summit itself.  Enjoy the view of Sandia to the southwest, then retrace your steps.

The Glorieta Conference Center, which controls access to the Gloriety Baldy Trail, has changed ownership multiple times.  It is usually necessary to obtain permission to use the trail, though when the center is open, this is free and supposedly easy.

Like most southern Sangre peaks, Glorieta Baldy is climbable year-round, but is most pleasant in October or November, after temperatures have cooled but before the first permanent snow.

Both Gloriety Baldy Road and Forest Road 79 run through National Forest with abundant dispersed camping.  There are a few picnic tables and a fire ring just below the Glorieta Baldy Lookout as well.