The north face of Monte Zabus - Curtissons ridge.
Monte Zabus, 2244m is rarely visited mountain. The reason is that it is located in the "shadow" of the mighty Montaz / Iof di Montasio, 2754m. Monte Zabus is located in the west ridge of Montaz that comes from the west side, from Monte Cimone / Strma pec, 2380m. On the west side is the notch Forca di Vandul, 1986m. This notch is between Monte Cimone and Monte Zabus. On the east side is the notch Forca Bassa, 2070m. The next mountain to the east side above Forca Bassa is Curtissons, 2240m. Then the ridge goes over some not important peaks to the notch Forca dei Disteis, 2201m below the south face of Montaz.

The north side of Monte Zabuz is very wild. Almost 1300 meters high slopes and faces of very hard approachable forest, dwarf pines, steep grassy slopes and extrremly vertical faces. There are two big gorges. One is Rio Saline and the second one is Clapadorie. Between them is moutain Jof di Miez, 1974m that is connected over the mighty and wild ridge of Swords to Curtissons on the south. This is one of the hardest and wildest ridge in the whole Julian Alps. It is an amazing trip to come over the north slopes or some of the ridge to the main ridge between Monte Zabus - Curtissons. The ridge from Monte Zabus to Monte Cimone. Down on the left you can the company. :)
The south side is much nicer. The long steep grassy slopes that ends in the forests of the plateau Pecol. Over the south side also goes the normal approach to the summit. Check the description or route overview section.

This is the mountain on the east side of Monte Zabus. It can be reached from the Forca Bassa, 2070m between Zabus and Curtissons. From the summit you can enjoy in the view on the north ridge of Swords. 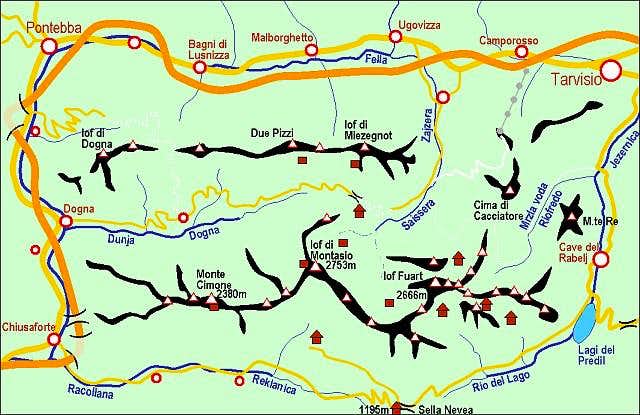 The overview map of the area. Monte Zabus is loacted on the right side of Monte Cimone.

1. For the south ascent you must deter from the highway in Chiusaforte and travel through Rakolana (Reklanica, Raccolana) valley to Sella Nevea (Nevejsko sedlo) pass, 1142 m. This pass can also be reached from Tarvisio towards south through Valle Rio di Lago (Jezerska dolina). On Sella Nevea you turn towards north-west and drive by a narrow alpine road to Malga Pecol, 1520 m.

2. For the north ascent you must deter from the highway in the village named Dogna and travel 15 km through the Dogna valley. Tour skiing below the Montaz, 2754m

East ridge. From plateau Pecol, 1502m over the south slopes to the notch Forca Bassa, 2070m and then over the east ridge of Monte Zabus to the summit. Medium hard route, not marked with some steep grassy slopes and some rocky passages on the ridge. Descripiton.

West ridge. From the notch Forca di Vandul, 1986m over the very steep grassy slopes with some rocky sections. You must find the best passages. Some easy climbing UIAA I-II.

On Curtissons You can ascend to the summit from the west rudge that starts on the notch Forca Bassa, 2070m or from the east ridge from the pass Forca deu Disteis, 2201m over some more small peaks. The east ridge is harder (some UIAA I-II climbing). Descripiton of west approach.

There are also some climbing routes in the north face but I do not know names. The wild north ridge of Swords from the Jof di Miez, 1974m is one of the hardest ridges in Julian Alps. An alpine steinbock.
No limitations or special permits.

The best and the easiest time is in the snowless season. That is in Summer and Autumn. But also in Winter the summit of Cortissons is a nice not hard tour skiing goal.

The nearest hut on the plateau Pecol: