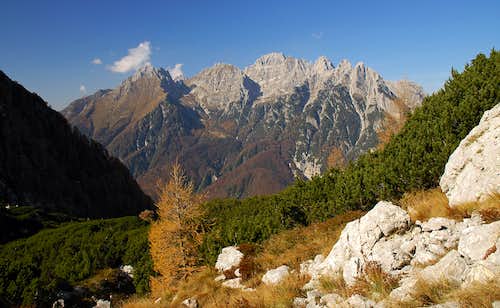 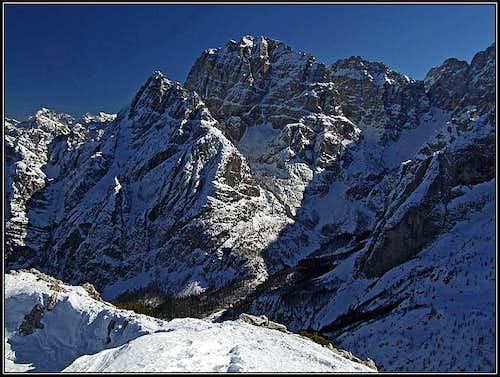 Due to the cultural diversity of the area, the following names of this mountain can be found:

Western Julian Alps have two great, very dominant mountains: Jôf del Montasio and Jôf Fuart. The latter is a strong, huge castle and no wonder that Furlani, people, living in these mountains, call it so - The Strong Mountain. Although being in the middle of its mountain group, Jôf Fuart is much higher than its neighbours, so it is still eye-catching from all sides. From the east and south it looks very massive. Towards the north-east it shows its elegant dolomitic shape - together with the neighbouring summits above Carnizza di Camporosso / Žabniška krnica, forming one of the most beautiful scenes of Julian Alps. The wildest and most magnificent is the view on Jôf Fuart from the west. From the distance, it is like a big Liberty Bell of Nature , more from below the walls, for example from the north-west, from Špranja, it looks again as a high, sharp pyramid.

Looking only Jôf Fuart (not the whole narrow massif) its borders are the following: On the north Nabois Grande / Veliki Nabojs is being attached to Jôf Fuart on Sella Nabois / Škrbina Nabojsa (notch), 1970 m. Towards the west, the walls fall down into the valley of Špranja. The south-west border towards the rest of the main crest of Western Julian Alps lies on Forcella Mose / Škrbina Zadnje Špranje (notch), 2271 m. Towards the south, high slopes are falling all the way down towards the valley of Rio del Lago / Jezerska dolina. And towards the east, Jôf Fuart group continues with a beautiful bouquet of three high neighbours: Madri dei Camosci / Gamsja Mati / Gamsmutter, 2503 m, Torre / Turn, 2463 m, Innominata, 2463 m, and Cima di Riofreddo / Divja Koza / Kaltwasser Gamsmutter, 2507 m. Over the southern slopes of these peaks also one of the most beautiful approaches on Jôf Fuart leads.

Jôf Fuart is primarrily a mountain for climbers and experienced hikers. Because its upper part is steep also on the southern side, it is not appropriate for normal tour skiing. The ski descent from the summit is a challenging alpinistic tour. Still, some lower lying slopes and couloirs offer in spring also nice skiing opportunities.

By marked paths Jôf Fuart can be climbed from the south. At Rif. Corsi paths from several directions join and a few hundred meters higher also the eastern and western approach join. From there only one route leads to the top.

A Bit of History 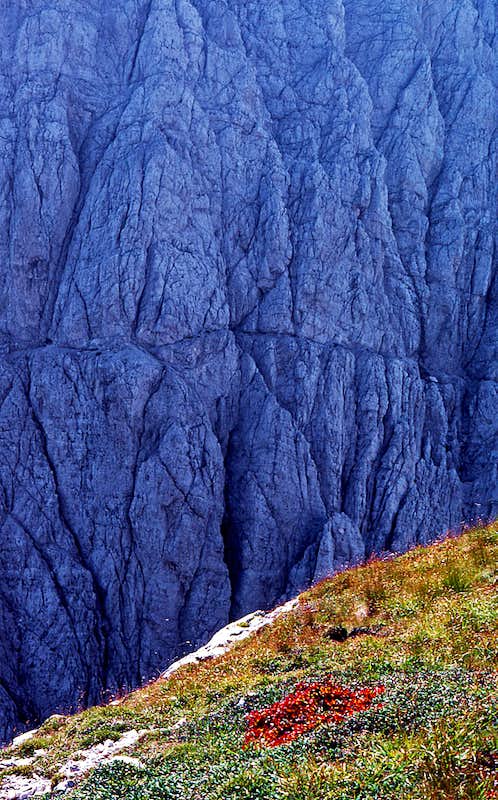 * It is very likely that the first visitors of Viš / Iôf Fuart were locals, shepherds and hunters from the valleys on the southern side.

Panorama from the summit of Jôf Fuart / Viš is very broad indeed. In front you can see the wild neighbouring mountains, including the views on the northern walls of Jôf di Montasio / Montaž chain. In the distance, you can enjoy the views on the Eastern Julian Alps, Canin / Kanin massif, Carnic Alps, Dolomites and on the north many groups of Austrian mountains. Let the following pictures talk...

Once being on Rif. Corsi, one can again choose more routes (actually three) to the summit of Jôf Fuart / Viš. As they can be combined with approaches from other valleys (except the direct route), each will be mentioned in an appropriate combination. 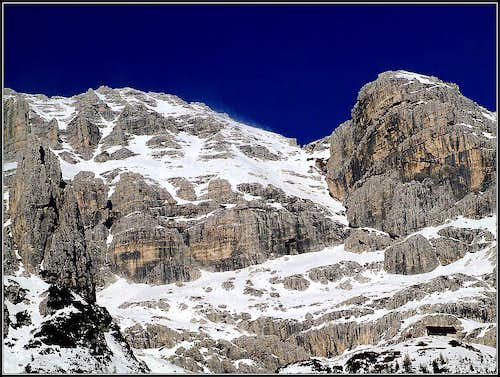 1. From Rif. Corsi over the S slopes. This is the most direct and easiest route. Marked, but still steep and secured on some places. 2 h 30 min from the hut, 5 h 30 min from car (the road).

3. From Rif. Corsi over Forcella di Riofreddo, 2240 m. Longer and harder than both #1 and #2, but again more beautiful. Marked, secured, on the upper part medium hard ferrata (named: Anita Goitan). From the hut to Riofredo notch 1 h 30 min, from there by ferrata Anita Goitan, crossing below all summits east of Jôf Fuart / Viš, 3 h more to the summit. 6-7 h from car (the road).

5. From Saisera over Forcella Lavinal dell Orso / Škrbina sprednje Špranje (notch), 2138 m. Very long, but nice ascent, the normal option around the western side. The ravine below notch till mid summer covered with snow. 3 h 30 min to there. From the notch you must go over the ridge of Cime Castrein / Koštrunove špice, 2502 m, and down to Forcella Mose / Škrbina zadnje Špranje, 2271 m - this takes you 2 h. Then 1 h 30 min more to the summit. Altogether 7 h or even some more from car (the road). 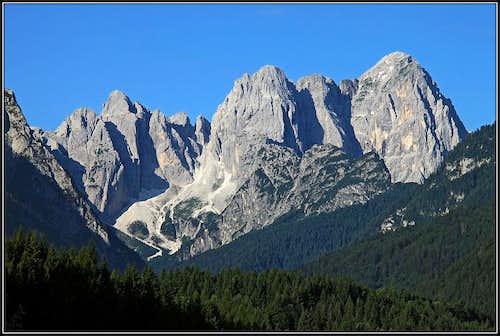 Iof Fuart group from near Tarvisio. On the left are you can see the upper sands of Riofreddo valley

7. Through Riofreddo valley over Forcella di Riofreddo (notch), 2240 m. As this valley is longer and not reachable by car, this is also a very long tour. But also demanding and very beautiful. From the main valley Rio del Lago (you leave your car in Riofreddo village) 4 h 30 min to the notch and then like in #3 by Anita Goitan ferrata in 3 h to the summit. So altogether 7 h 30 min. The upper part of Riofreddo valley can be reached also from Saisera valley, more concrete from the Pellarini hut. In this case you must cross the Sella Carnizza (notch), 1767 m, and the tour can hardly be done in one day.

8. Through the north-east ravine - Gola Nord Est. This hard route (in terms of hiking) was first climbed by J. Kugy and his guides in the year 1901. Later in World War I it was secured for military purposes (also by his team). Towards the end of 20th century it was abandoned, destroyed by avalanches and so returned into the original medium hard climb. Today it is secured and marked again, but still represents a hard hike. Today (2013) only a few short sections are secured, for those a ferrata difficulty gradig "D" would apply. The rest is unprotected and requires easy climbing of difficulty UIAA II. The route is also not marked sufficiently, so in quite some places good orientation is needed. The NE ravine exits on the notch between Jôf Fuart / Viš and the neighbouring Madri dei Camosci, some 30 min below the summit. From the Pellarini hut 4-5 h, from car in Saisera valley 7 h.

Summer and autumn are the best seasons. In Julian Alps in summer a stable weather usually starts somewhere in July and months from August to October are the best. In early July on some parts of north routes dangerous snow rests can lie.

For tour skiing the best months are from february till may, but in early months carefully choose the tour due to big avalanche danger on those steep slopes. 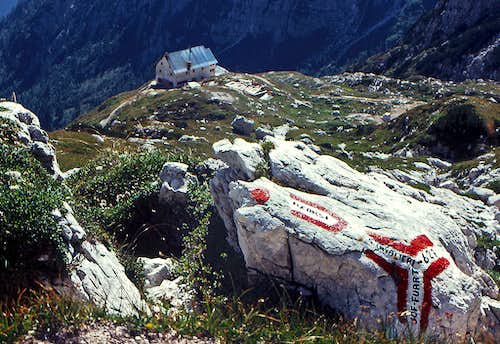 The best starting point for a summit tour is Rifugio Guido Corsi (hut), 1854 m, lying on the southern slopes of Jôf Fuart / Viš massif. It can be reached in 3 h from Sella Nevea (road pass). Also the path from Val Rio da Lago will take you 3 h and the other one through Val Riobianco (Dolina Belega potoka = White Creek Valley) will take you about 4 h.

In Val Riobianco another hut stands - Rif. Guido Brunner, 1380 m, which can be reached in a good hour from the main valley. Because this is a good climbing area on the altitude of 1950 m also a bivouac lies (Bivacco Gorizia).

West of Jôf Fuart / Viš Valbruna Valley ends with Špranja high basin. On the upper part of it Bivacco Dario Mazzeni, 1630 m stands. It can be reached from the end of the road in 2 h.

Similarly on the north-eastern side of the narrow group, on the altitude of 1500 m Rif. Pellarini (hut) stands. It can be reached from the road in Valbruna in 2 h. Normally, it is opened from June 20th to September 20th.

In valleys there is one camping place near Rabelj Lake and another one near Tarvisio.