* Although almost all of Yellowstone National Park is in Wyoming, all of Cutoff Mountain, a Yellowstone peak, is in Montana. 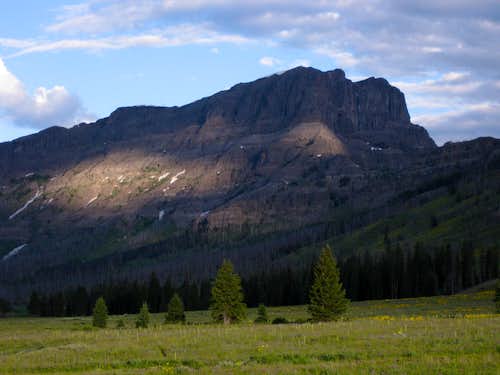 Cutoff is a beautiful mountain with great routes, and it is in an exceptionally spectacular setting, between the wild and scenic valleys of Pebble Creek and Slough Creek. Many bighorn sheep and mountain goats make the mountain their home, and it is a good home, being virtually inaccessible to predators such as grizzly bears and wolves except from Bliss Pass. Even from the pass, predators would have to negotiate tricky terrain to access the upper reaches of the mountain.

Be on the lookout for petrified wood as well, but don't take any with you (it's illegal to do so).

The summit has a cairn but no register, which is surprising since a biology student named Nathan Varley left one in 1991 and periodically checked it to learn about climbers' observations of wildlife. Between 1991 and 2001, about 100 people from at least 30 climbing parties reached the summit (source: Select Peaks), making it fairly popular for an Absaroka summit. But that's Yellowstone country for you, where a peak that sees ten climbers per year on average can be considered "fairly popular."

Views from the top are amazing, taking in the Beartooths, including Granite Peak, Montana's highest; the Northern Absarokas, including iconic Pilot Peak; and the distant Gallatins, including Electric Peak, the range's highest. 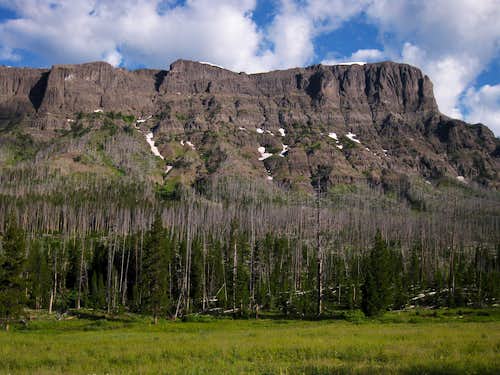 
Climbing Cutoff Mountain is no casual matter. The standard route, via Bliss Pass, is 10.5 miles to the summit (not the 13 miles Turiano gives). Trailhead-to-summit elevation gain is 3400', but the true total elevation gain to the summit is closer to 4300, and the round-trip gain is about 5200' (this is based on map study and an analysis of GPS tracks). Class 3 terrain is unavoidable, and Class 4 climbing is possible.

A shorter route of about 7 miles (to the summit), with around 3800' of elevation gain to the summit and 4200' in all, exists on the southeastern face. While I recommend this route to experienced climbers, I do not recommend it to people newer to the game, as it requires bushwhacking through a burn area and sustained Class 3/4 climbing up cliffs.

Either route also requires at least two stream crossings, which could be difficult in early summer.

The shortest route is actually under five miles to the top and approaches from the west, but it is impractical for the public. The route leaves from the Silver Tip Ranch and follows Cutoff Creek. This route is open to the public, but one first must hike over 10 miles along Slough Creek Road to the ranch; the road is not even open to bikes.

Attached route pages detail the first two routes, both of which originate at the Warm Creek parking area 1.2 mi inside Yellowstone from the northeast entrance. 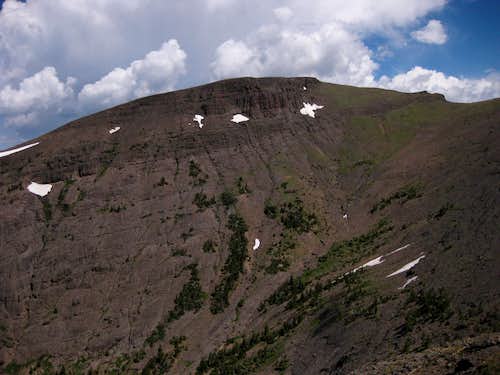 Bliss Pass and the valley of Pebble Creek are prime grizzly territory. Make noise, carry pepper spray and have it accessible at all times, and know how to behave around the bears.

There is a lot of good moose habitat around Pebble Creek. Some people consider a cow moose around her calf more dangerous than a grizzly bear. Do not underestimate these large, powerful animals.

People climbing the peak in a day can camp at Slough Creek or Pebble Creek Campground; Pebble Creek is by far the closer to Warm Springs. Sites at both campgrounds are first-come, first-served.

There is lodging about 28 miles west at Roosevelt Lodge; check Xanterra.com for details and reservations. Just outside the Northeast Entrance, there are lodging options in Silver Gate (less than a mile from the park) and Cooke City (five miles from the park).

There are backcountry campsites along Pebble Creek Trail, and many people would probably prefer to make Cutoff part of a backpacking excursion instead of taking on the 21-mile (round-trip) standard route in a single day.