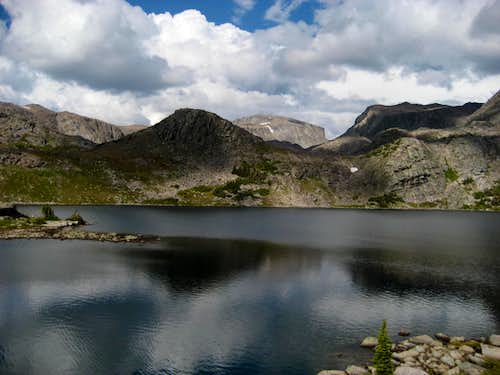 Cloud Peak is a Wyoming thirteener and the highpoint of the Big Horn Range. It is the third highest range highpoint in the state and one of the Ultra-prominence points of the United States. The mountain, a Wyoming landmark, is visible across great distances and from other mountain ranges of Wyoming and Montana as well as being visible from populated areas. It is the centerpiece of the Cloud Peak Wilderness and its giant east face harbors the largest glacier in the range (the Cloud Peak Glacier). Though the SW Ridge is a long scramble, there are big wall climbs on both the East and SE faces. The peak (and the SW Ridge route) are among the most popular ascents in the state. It is common to see several parties a day attempting the climb during the summer climbing season (July and August). Speed ascents have been made from the West Tensleep Trail head in under three hours. The north summit (12855') is known as "Kramer Point". Note: Original page was written by jimmyjay; Photo below by CameronGround 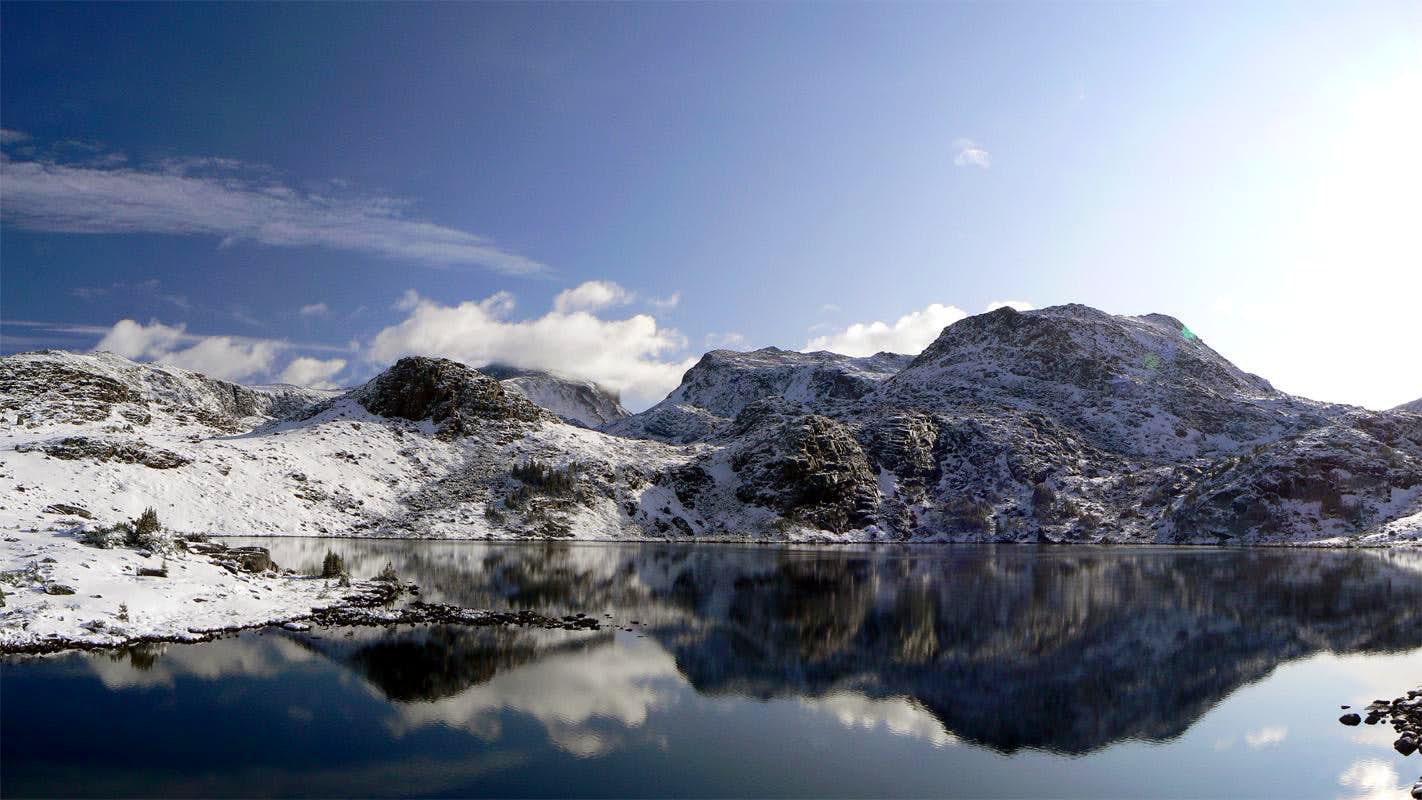 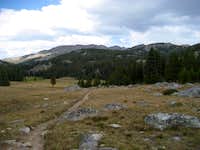 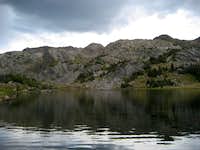 There are several ways to reach the west side of Cloud Peak. The most common approach starts at the West Tensleep trail head, which is reached by turning left off of the Cloud Peak Scenic Byway (Highway 16) at Deer Haven Lodge onto Forest Road 27. Follow this road for about 9 miles to the parking area at the trail head. Hike on the Mistymoon Lake Trail (trail #063) around the shores of West Tensleep Lake, and negotiate a small stream crossing. There used to be a bridge here, but it has been removed; it is not too difficult to rock-hop across when the water is low. Follow this trail for about 6.5 miles, passing Lake Helen and Lake Marion before arriving at the shores of Mistymoon Lake. After skirting around the lake, the trail meets up with the Lake Solitude Trail (trail #038), which heads west along the hillside across the valley south of Paint Rock Creek. Another option is to drive the lengthy road (about 15 miles) to the Battle Park trail head to make the approach to Cloud Peak via the Lake Solitude Trail. This road turns left off of Forest Road 27 shortly after you leave the highway. The total hiking distance on both approaches is about the same. 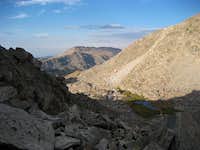 On the SW Ridge 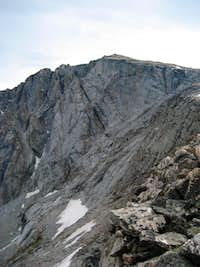 Detailed information on the Southwest Ridge route on Cloud Peak can be found on the following route page. The round-trip distance for a climb of Cloud Peak is 23 miles with about 4,000 feet of elevation gain. Some parties travel light and climb the whole route in a day; some camp at Mistymoon Lake for a night and then summit the following morning followed by the long hike out that afternoon, while others spend a second night at camp and hike out the next morning. The biggest thing to consider while on this mountain is that it is difficult to get off the very long summit ridge if a thunderstorm comes up quickly (as they tend to do here, sometimes as early as 10:00 a.m.). 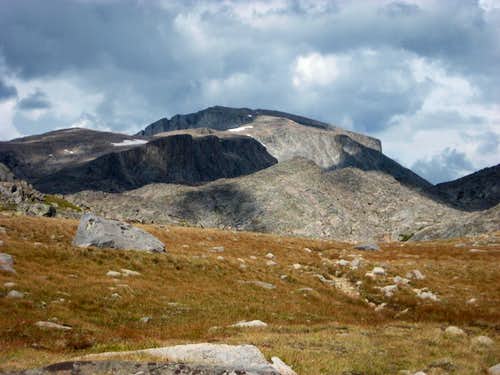 Cloud Peak is managed by Bighorn National Forest. Permit boxes are located at the trailhead. There is no fee for the wilderness permit. Aside from rescue location, the permit delineates the rules of wilderness use and travel in this heavily used area. One of the main points is that there are no campfires permitted in this region. You must use backpacking stoves. Note: You can not camp adjacent to Lake Helen (or within 100 feet of Marion Lake or Mistymoon Lake). 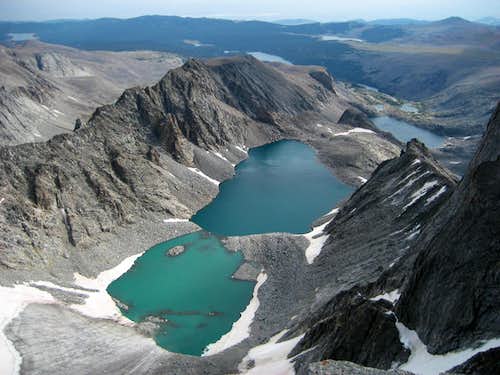 The Big Horn Mountains tend to melt out earlier than other Wyoming ranges; however, you can expect to see snowbanks high on the mountain through the summer in most years. They also get snowstorms as early as the last week of August. Mosquitoes appear in clouds from late June to mid-August and Afternoon/evening thunderstorms are frequent. A webcam illustrates current weather in the Cloud Peak Wilderness well south of Cloud Peak. 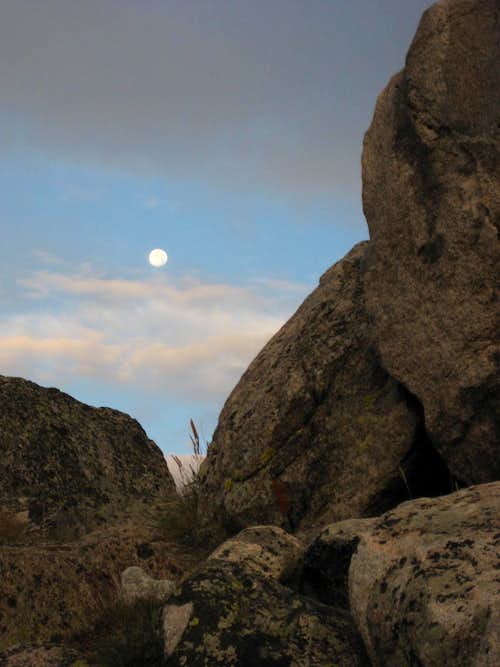 Camping 100ft or more from Helen has been allowed since 2012.