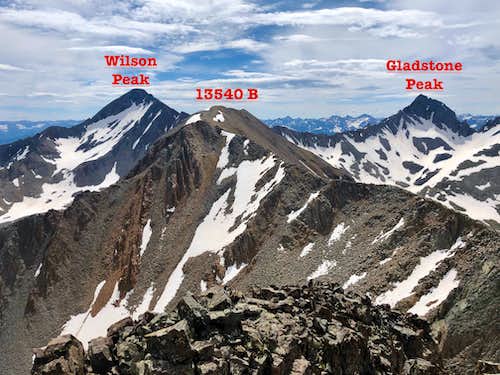 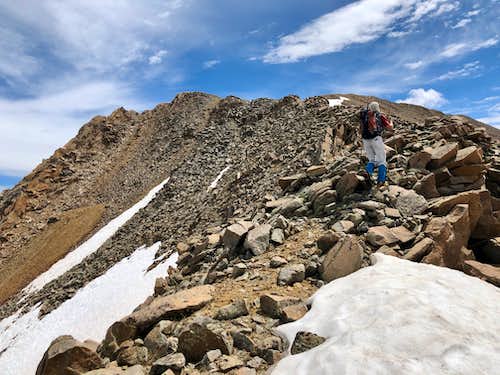 13540 from the saddle
Unnamed 13540 B Peak is located in San Juan Mountains near the historic town of Telluride. The peak combines well with Fowler Peak. And if you feel energetic, you can add Boskoff Peak. Why unnamed? Colorado has so many 13ers (mountains > 13,000 feet) and many are unnamed. There are 584 ranked 13ers in Colorado! The peak is not well seen from the distance since it is hiding behind a 14er Wilson Peak.

From Ridgway, take CO 62 towards Telluride. Drive Dallas Divide and into Placerville, turn left onto CO 145. Drive 6.5 miles and turn onto well signed Silver Pick Road. This is easy 4 WD road, high clearance 2 WD should be fine. Drive 4 miles to an intersection and bear right onto FR 622 (all turns are marked; this is the standard winter closure). Drive 2.2 miles and bear right onto FR 645. Cross a small stream and continue to Rock of Ages Trailhead at 10,300 feet. 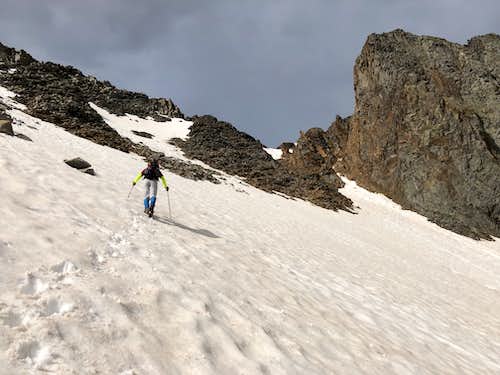 Towards the saddle
From the trailhead hike on Rock of Ages Trail, well marked trail. Pass the gate and stay on a larger trail. In about a mile come to some talus and follow a large switchback. Leave the main trail here and use a smaller trail marked as Elk Trail #407. Follow this trail. We encountered snow, but at some point there should be road leading into "school bus basin". School bus basin is an unofficial name of the basin on the north side of Fowler Peak and 13540 Peak. There used to an old school bus! However the bus was removed and the name stayed.

We could see an old road here and there between the snow, but we chose to directly ascend on easy snow slopes, maybe 35 degrees steep, it got a little steeper near the saddle. I was happy for so much snow covering the talus and scree. We continued to ascend all the way to the saddle between Fowler Peak and UN 13540. Since our objective was to summit both peaks, we went first onto Fowler Peak, returned back to the saddle and went up the easy west ridge to the summit of 13540. The summit offered great views. There was a cairn and summit register. We retraced out way back to the saddle and returned the same way back. 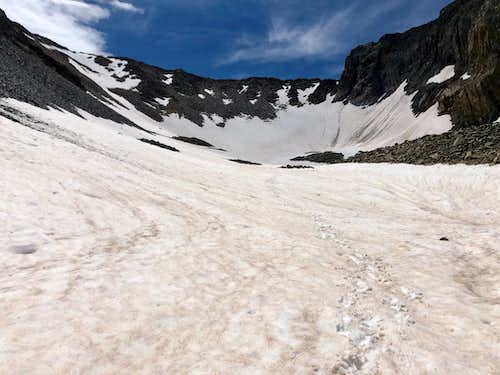 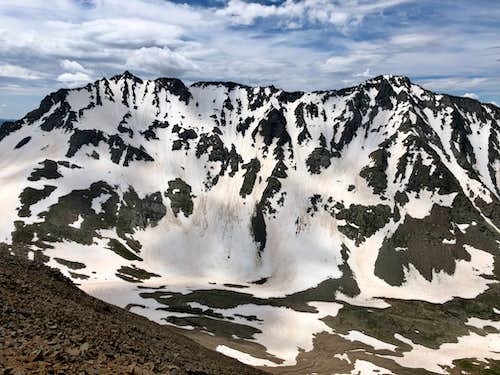 Mount Wilson El Diente traverse
Parking at Silver Pick Trailhead is free. Hiking the trails and climbing the mountain too. Fowler Peak is located in the Lizard Head Wilderness area, so wilderness area rules apply.
Motorized equipment and equipment used for mechanical transport is generally prohibited on all federal lands designated as wilderness. This includes the use of motor vehicles, motorized equipment, bicycles, hang gliders, wagons, carts, portage wheels, and the landing of aircraft including helicopters, unless provided for in specific legislation.
ALL VISITORS
It is prohibited to enter or be in the area with more than 15 people per group, with a maximum combination of people and stock not to exceed 25 per group.
It is prohibited to build, maintain, or use a campfire: 1) within 100 feet of any lake, stream or National Forest System Trail; 2) above tree line; or 3) within Navajo Basin.
It is prohibited to store equipment, personal property, or supplies for longer than 3 days.
It is prohibited to possess a dog that is not under control, or that is disturbing or damaging wildlife, people, or property. Note that the term "under control" is defined as the dog being leashed, and/or under direct verbal control by the dog's owner or handler at all times.

The best time to climb this peak is when the "school bus basin" is still covered with snow - early summer. This avoid ascending loose and nasty scree and talus. Obviously you can climb at any time, winter and early spring pose a high avalanche danger.

You can sleep at the parking lot - Silver Pick Trailhead. There are several primitive campsites along the road to the parking road as well. Developed campgrounds - the closest one would be at Wood Lake, for more information click here.