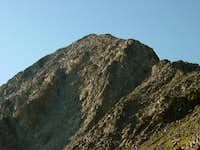 In June of 2002 Mount Lindsey's elevation increased by 5 feet after a USGS revision. This beauty is part of the Sierra Blanca mountains of the Sangre de Cristos which also include three more 14ers: Blanca, Ellingwood Peaks, and Little Bear.

This is one of the harder Colorado 14ers to summit. The easiest route (N Face/N Face Couloir) is a very loose class 2+. This is the standard route but should not be. See "Be Warned-North Face Couloir" below. The recommended route is the NW Ridge which is a delightful, solid ridge scramble/walk. The class 3 section is short.

Because of private property surrounding the mountain the North Face and NW Ridge are the only climbing routes - at least without requiring special permission.

Mount Lindsey and its surrounding terrian boasts some of Colorado's most dramatic scenery. The Huerfano Valley is worth a visit even if climbing is not in your plans. Anybody whose ever been to this trailhead knows this is one of Colorado's finest spots for photography. Blanca and Ellingwood Peak's northeast face absolutely dominates the skyline. It is quite a spectacular place to be. 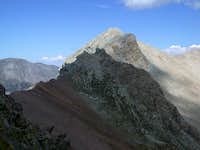 Author: Aaron Johnson
Date: Nov 20, 2003 5:03 PM
Ellen's friend and boss at work fell down Mount Lindsey. I do not know the specifics, but it sounds like he was on some old snow and ice from some early winter storms, in the north facing couloir that has developed a nasty reputation. People have fallen and died in this couloir, which is very steep and the rock is perilously unstable.

He fell 200 feet, bouncing all the way down the couloir, and he lived. His wife, who elected not to go any further and wait for him, saw the end of the fall. He was lucky. Two other folks on the mountain were a nurse and doctor. He ended up with over twenty stiches in his head, (metal staples), but had no broken bones. He was reported as in a "concusive state." Could have been much worse.

This couloir is a mess and claims many people as victims. It should not be attempted in any condition but dry, and only then with much care, experience and leaning to the right side where more stable rock along a cliff is available.

It may be wise for us at SP to stress the danger of the couloir and that the alternae route might be a better choice, since it is on more stable rock. This route does exceed Class 3 and 4 in difficulty, which would make Lindsey even more appropriate as a 14er to be saved toward the end of one's 14er bagging endeavor, when experience has been mustered to climb this ridge.

Please get the word out about this approach on Mount Lindsey when discussing this mountain with fellow climbers that aspire for this difficult summit. Thanks.

From Denver drive south 2.5 hours to exit 52 to Walsenberg. Take a quick turn west on Colorado 69 and follow it west for 25.1 miles to Gardner. There is not much, if at all any lodging here. A bit past Gardner turn west on 69 toward Redwing. Measure from this point. At 5.1 mile the road becomec a well grated dirt road. At 12 miles the road splits, go to the left. At 16 miles you will pass the Singing River Ranch. The road is plowed to this point in the winter. You are now on private property and the road becomes rougher at this point, but still passable with high clearance 2wd. I personally wouldn't think about taking my passenger car pass this ranch but that's up to you. Continue to mile 20.4 mile to the lower Huerfano Trailhead and also the San Isabel National Forest Boundary. The last 1.9 mile to the Upper Huerfano Trailhead is 4wd stuff. There are also plenty of campsites in this area.

From points west (Alamosa) attm has this to add.
If you are coming from the west on Colorado State Highway 160, there is a shortcut. 2 miles before North La Veta Pass, make a left turn on county Rd. 29. Keep your eyes open because it is easy to miss. It intersects 160 at a fairly open and less steep area of the highway. It is a dirt road but is passable in passenger cars. The road becomes # 572 after crossing a cattle guard at Pass Creek Pass (funny name but true). At approx. 7 and 1/2 miles you will come to a T intersection. Make a right turn and you will now be on Rd. 570. The road will dead end at Malachite. Make a left turn and you are now on the route from the east. The distance from the 160 turnoff to Malachite is 12.2 miles. This will shave off a lot of time if you are coming from the west.

"The Roads of Colorado" map book illustrates this route very well. This is a highly recommended book for any of the more remote mountain access in Colorado.

The Iron Nipple is a named point on the SW Ridge of point 13828, "Huerfano Peak". It is a short but interesting addition to an ascent of either Huerfano Peak or Mt. Lindsey. Indeed the Iron Nipple's standard route shares most of its path with the standard route up Mt. Lindsey and is by far the most common route. In fact a cursory search of the Internet revealed no other routes. Certainly some technical routes do exist though.

The standard route begins at the Huerfano River Trailhead and follows Mt. Lindsey's approach. From Mt. Lindsey's ridge (Iron Nipple - Lindsey saddle) at 13,160' the Iron Nipple lies just .2 miles north. Turn your back to Lindsey and travel north on a faint climbers trail along the ridge to a rock outcropping startlingly similar to a curtain wall complete with flanking towers and machicolations. Pass between two towers and climb to just below the summit. Passing to the right of an outcrop, a very short section (10') of exposed rock can be crossed directly or bypassed on the left. The summit (13,500') is reached moments later.

The route ranges from class 1 to class 2. Gerry Roach uses his class 2+ designation here. There are no routefinding difficulties. Return via the ascend route.

No permits, parking passes, or fees. However one reaches the Huerfano Trailhead by a narrow road through private property. Be respectful.

Really like any other mountain, Lindsey and be climbed all year.

Winter closures and avalanche potential certainly make this a harder proposition then. The usual time is during the summer months.

Once past the private property along the road to Huerfano Trailhead camping is allowed. The basin offers some nice sites, however, I have read that bears can be a problem at night. SUVs and pickups with caps make great worry-free accomodations.

Your back at the trailhead and thoughts naturally turn to food and drink. Where do you go?

Nearby:
Cuchara:
The Dog Bar is a dog friendly establishment that serves good pizza (after 5) and the usual fare off the grill. Frosty mugs of Fat Tire are available and happy hour runs from 4-6 M-F. $6-8 for lunch, $6-15 dinner. It is located next to the Boardwalk Saloon among the nicely remodelled wooden tourist village on Hwy 12.

On the way back to Denver Metro:
Johnson's Corner:
Coyote Cantina Convenient if you want to split that 4 hour drive back to Denver in half. 719-395-3755, 1295 Hwy 24 at Hwy 285 intersection. Great Mexican food and margaritas with a view of the Sawatch.