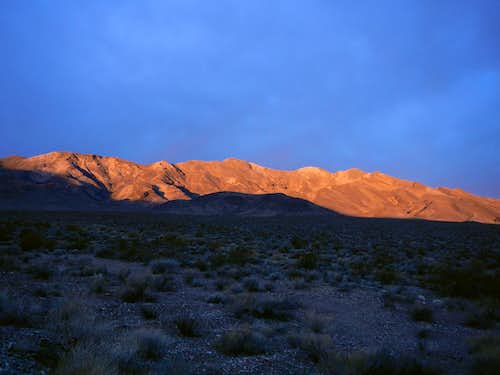 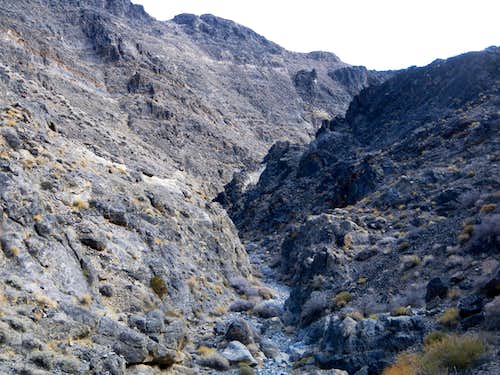 Canyon Narrows
At 5266 feet, Stewart Peak is ranked number 66 on the Sierra Club’s Desert Peak Section list. It is also one of California’s P2k’s (2000 feet or more of prominence). Much of the exposed rock on the mountain is Pre-Cambrian and Paleozoic dolomite. The layers of strata have a wide range of colors which give it the interesting and attractive appearance. Also the dolomite limestone tends to erode into natural caves. Many small to medium sized caves can be seen scattered around the mountain and various predatory animals occupy these spaces. If you see large piles of sticks and branches piled up inside a cave as I did when I was there, best leave it alone. 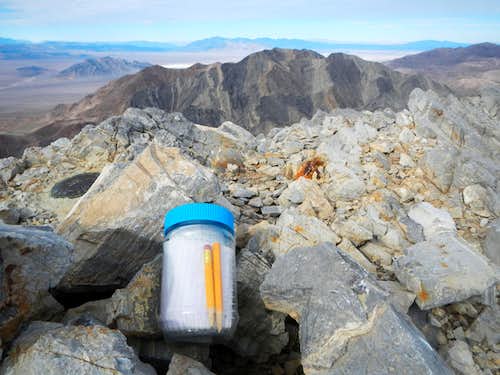 Stewart Summit Register
The standard route begins on highway 178 and enters a southeast wash to reach the east canyon whereby it gains the east ridge that leads to the summit. This route is 6.7 miles one way and gains 3450 feet.  There was a make-shift summit register present in January 2015. 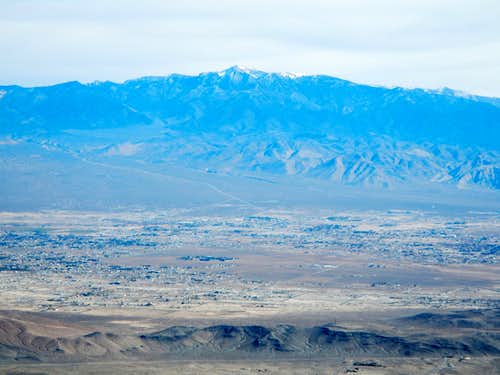 Mount Charleston And The City Of Pahrump
Views from the summit are quite good. Mount Charleston a mere 25 miles to the northeast is often capped with snow and especially impressive to behold. Below that is the city of Pahrump. To the southeast, Pahrump Point and the Nopah Range beckons. 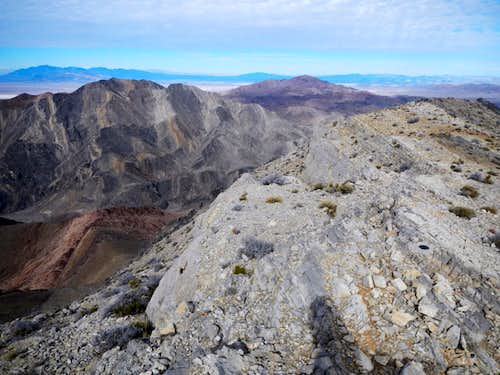 Pyramid Peak and Shadow Mountain
To the west Brown Peak rises on the far side of the Amargosa River as well as the distance Funeral Mountains and Telescope Peak. To the north, the other high peaks of the Resting Spring Range are not far away, including Point 5030 and the seldom climbed, mysterious Shadow Mountain. Eagle Mountain is also visible down below as well as Pyramid Peak, far to the north. 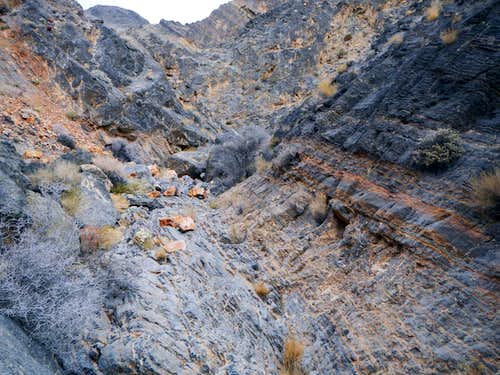 Canyon Strata
From highway 178, hike west by northwest, passing two outlier hills on your right side. The second hill is situated at the entrance to the main wash. Pass over a minor saddle southwest of the second hill and enter the main wash. Continue northeast to where the wash narrows into a canyon. If you encounter any class 3 dryfalls early on, then there are work-around options a little way back along the left side. 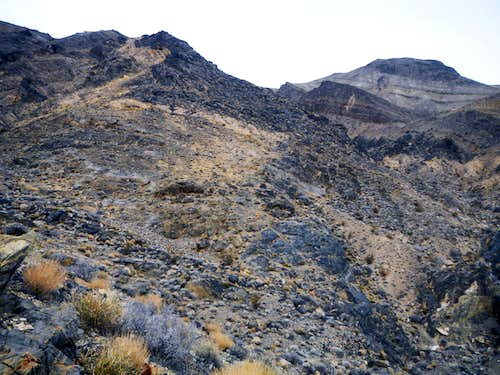 East Ridge On Left And False Summit On Right
The main wash becomes canyon narrows at 3360 feet. The one area in these narrows where most ascent parties encounter trouble is where two canyons converge at 3620 feet. It has been reported that there is an impassable 20 foot dryfall there. If you come to such an obstacle yourself, you are off-route. 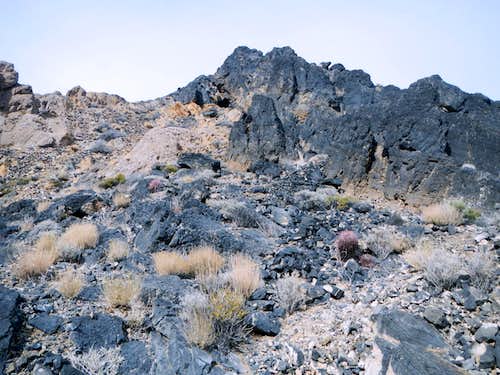 High On The East Ridge
To bypass the convergence dryfall, leave the canyon at 3520 feet and scramble southwest up a steep slope on the left side of the canyon. Ascend 200 feet, following a minor rib up until it is reasonable to traverse northwest back into the canyon bottom. In this general vicinity on the side slopes, you will have excellent views of the upper east canyon which includes numerous ridges and drainages composed of thick dolomite strata and is ringed along the top with several peaks. One of the peaks above, which has a black top and a diagonal white layer below that, appears to be the summit. It is not. The summit is left of that, out of view. 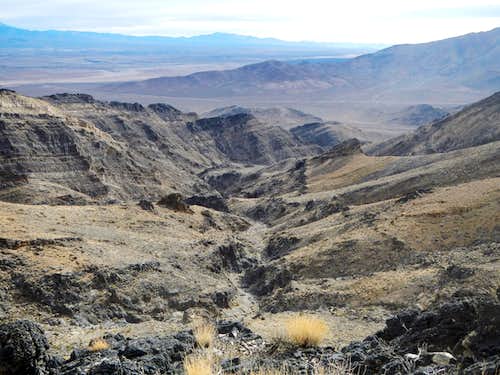 The Approach Canyon Below
Drop back into the left for of the canyon and follow it west until the next fork at 3800 feet. You are now at the base of the east ridge which leads to the summit. Ascend the ridge westerly roughly 1500 feet to the summit. Several rock formations present minor obstacles along the way but all them are easily avoidable. Pass around the left side of promontories at 4280 feet.  You will know you are near the summit when you come to the white rock section of ridge. 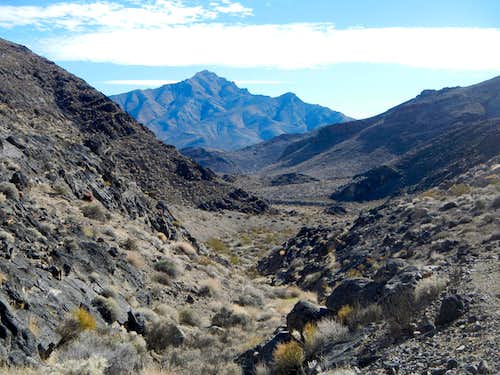 Pahrump Point And The Main Wash
From highway 160 in Pahrump Nevada turn west onto highway 372 (turns into highway 178 at the border) and drive 11.4 miles west. Park on the side of the highway at a turnout. Alternatively, from the town of Shoshone in California, take highway 178 east and then north for 15.7 miles. The turnout is one mile east of the high point of the road.