This peak is a nice walk from the 6860' Colonial-Névé Col and provides sweeping views of the area with perhaps more than 30 Washington top 100 summits visible including Mt. Baker and Shuksan, also the Picket Range and many more glaciated peaks. With 505 feet of prominence, it is a significant summit often overlooked by its higher neighbors. It rests in the Diablo Quadrangle between Colonial Glacier and Neve Glacier. Its base is composed of a beige colored rock, Skagit gneiss, which is a kind of banded gneiss dated to the Tertiary Cretaceous period (135-65 million years ago) while its very summit is grey orthogneiss covered in black lichen. The Colonial Glacier drapes around its Northwestern edge providing dramatic relief while the Névé gently creeps up from the opposite direction. There are many ways to get to this summit from either glacier depending upon chosen route, the easiest being class 1 with a few class 2 moves and snow fields that are navigated en route. 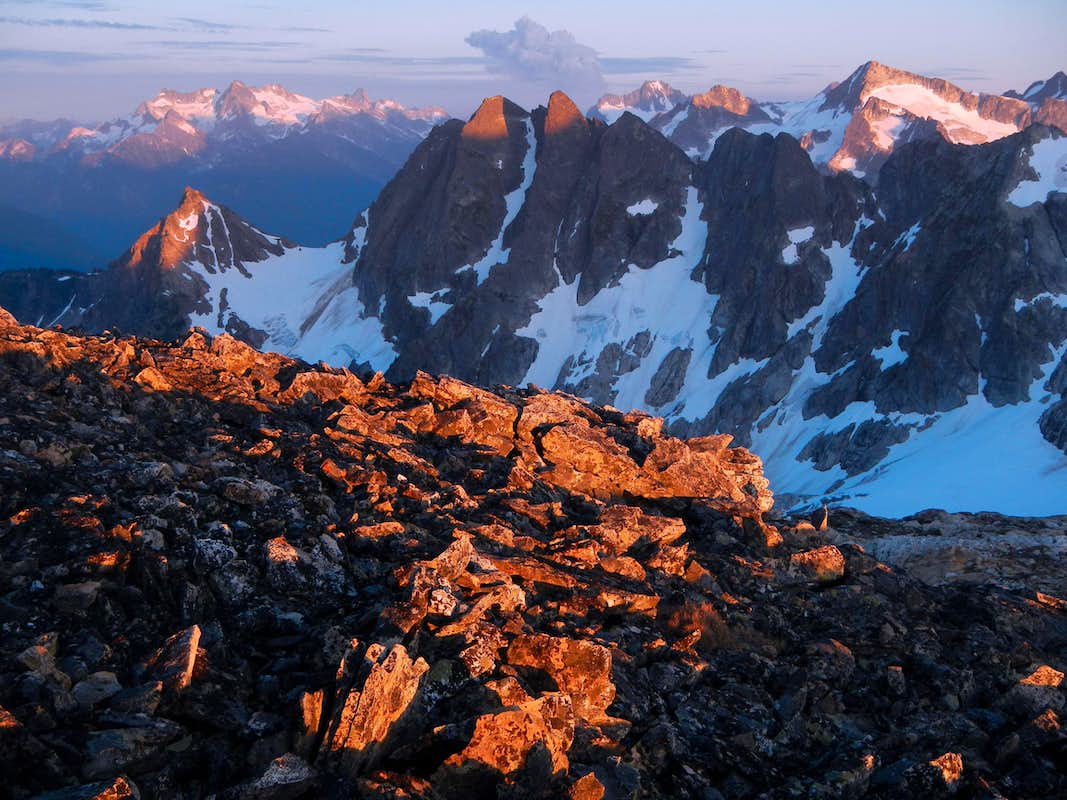 From Marblemount, head East on Highway 20 to milepost 126.8 where a small sign on the right designates Pyramid Lake Trail with a gravel pullout on the opposite side of the road (West). The trail meanders 2.1 relatively easy miles to the lake, which is a mecca for millions of nasty bugs but fortunately there is no camping allowed. The climbers trail begins going west then south around the lake and becomes quite burly in sections. If you're not up to the task, you'll know very early.

This peak sits wholly within North Cascades National Park and Stephen Mather Wilderness which means you must obtain a free Backcountry Permit for all overnight stays year-round. According to NPS, these are limited supply (although there are probably plenty for most places) and issued on a first come-first served basis at the Marblemount Ranger Station whose hours of operation are Sunday - Thursday: 7:00 a.m. to 6:00 p.m. , Friday & Saturday: 7:00 a.m. to 8:00 p.m. Their Office Phone is 360-854-7245. There are no reservations and you can only get a permit as early as 24 hours prior to your stay.

Climb anytime as long as the avalanche danger is low. Access to the peak is before the point in Diablo on Highway 20 that closes in winter (milepost 134) so it could be accessed anytime. Commonly it is approached via the Colonial Glacier, thus ice-axe and crampons are necessary and it is recommended that you rope up with rescue gear for crevasse hazards and have a helmet for possible rock and/or ice-fall. The climb is easy enough to accomplish in poor weather but not recommended since you would miss out on the best aspect of the climb (the incredible views) and risk potential falling ice from above Colonial Creek drainage.

There is one south facing bivy wall at the Colonial-Neve col with room for two 84x54" tents. A constant breeze from the temperature gradient will usually keep bugs away. There is running water in later season from the base of Névé's West face. Another option is to camp on the Neve Glacier on the East side of Névé peak. There are also several possible spots for bivying near the summit but you would have to melt snow for water and it may be against park regulations. This is true wilderness so keep your food and any scented items away from camp and contained against bears (which have been known to roam the area) especially in summer and fall. It would also be wise to keep anything like rope, harnesses or boots out of reach from rodents who like to chew on gear if given the opportunity.

Youtube video by gimpilator of a Snowfield peakbagging trip that included Névé peak:

This page needs some fixes. Looks like the NPS has changed all their links again (done every 3 months to destroy any page which tries to link).