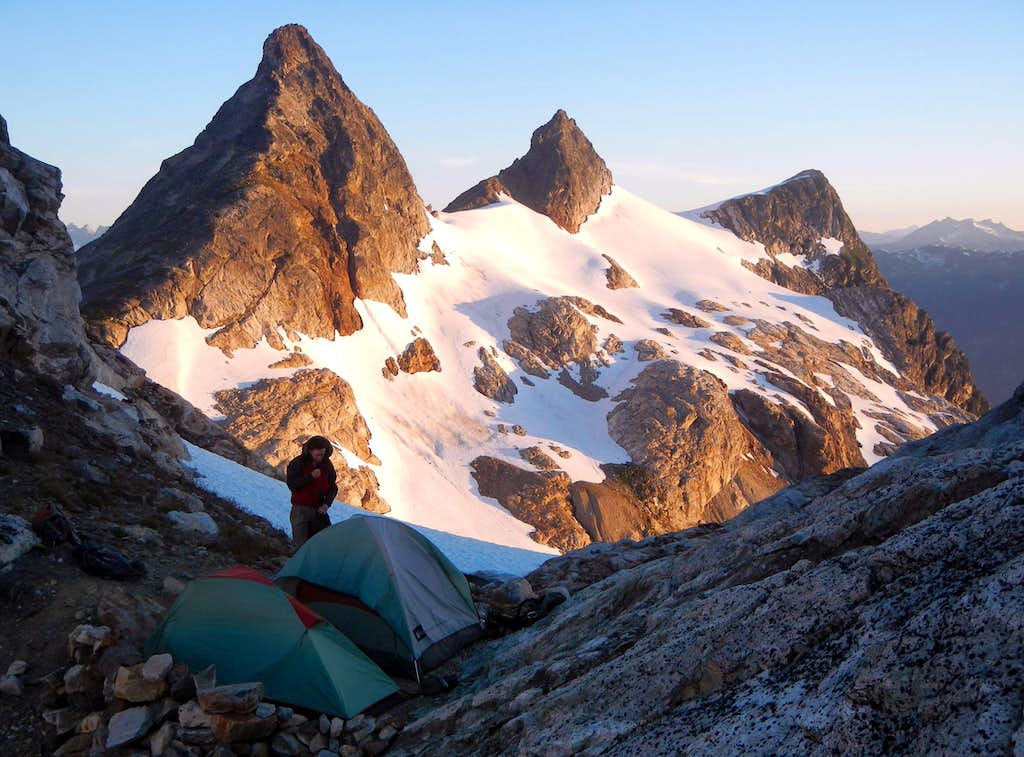 Paul Bunyans Stump, Pinnacle Peak, and Pyramid Peak
Paul Bunyans Stump is the highest peak along the western edge of the Colonial Glacier. It’s part of the trio of P-peaks, including Paul, Pinnacle and Pyramid, which creates a stunning backdrop above the Colonial Glacier. Paul Bunyans Stump is visible from Highway 20 and appears between Colonial Peak and Pyramid Peak as a steep, rocky, flat-topped mountain. In actuality it has a narrow summit ridge, wedge shaped.
Paul Bunyans Stump was first referred to as “What’s the Matterhorn” by the first ascent party of August 2nd 1931, William Degenhardt and Herbert Strandberg. Viewed from the south col, it does carry a striking Matterhorn resemblance. To reach the summit requires some minor class 3 scrambling albeit with heavy exposure, and an easy glacier crossing. See the route section for more information. 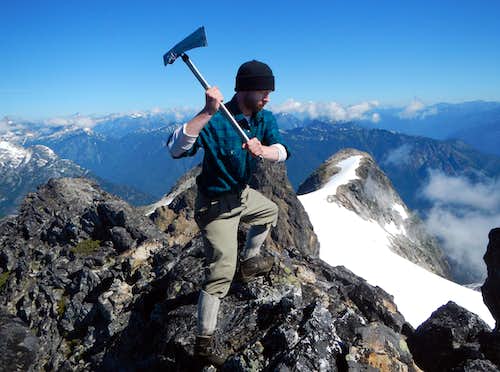 Paul Bunyan Impersonator on the Summit
Most parties will not access the snowfield Peak massif just to climb Paul Bunyans Stump by itself. This area is ripe with numerous peaks, each of which requires merely an hour or so to climb once you reach their base. For that reason it is suggested to spend several days camping on the massif and branch out from there.  Camping at Neve Col is the most scenic option.  Other peaks to consider include Snowfield Peak, Horsemans Pack, The Horseman, The Needle, Cats Ear, Neve Peak, Colonial Peak, Pinnacle Peak, and Pyramid Peak.

This route is similar to the corkscrew route on Sloan peak in that it winds all the way around the mountain before reaching the summit. It starts north of the peak, passes under the east face, ascends the south face and ends on the west face. 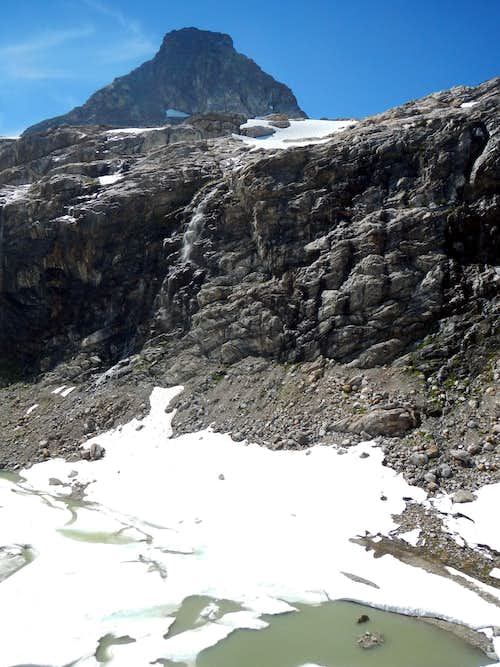 The East Face Above the Receding Colonial Glacier
From the Colonial Glacier ascend west or southwest to reach the col located below the south face of Paul Bunyans Stump. Ascend class 2 slabs and rocky benches weaving around or through clumps of small trees and bushes, then grass higher up. In the early season or winter, this may all be covered in snow. 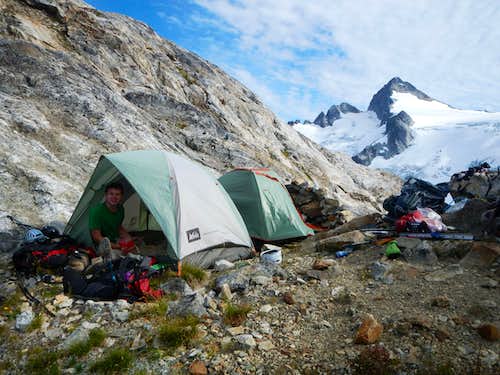 Neve Col Camp
The south face is divided into three sections. The lower section consists of the slabs, dirty benches and plants. The middle section is steeper and appears as a lighter colored rock on the left with darker rock on the right covered in black lichen. These left and right middle sections are divided by a shallow gully. The upper section is steep if not overhanging and is completely avoided by traversing around to the west face. 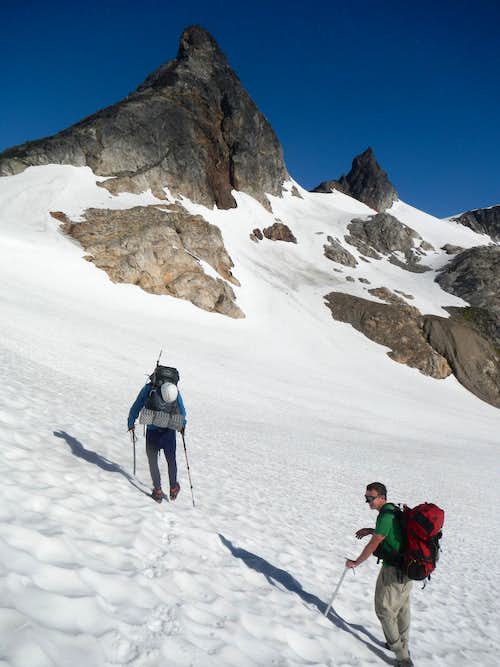 Traversing Colonial Glacier
Ascend roughly 20 or 30 feet inside the central gully and then either scramble up the lighter rock on the left (class 3) or move out onto the darker rock to the right (east) which remains mainly class 2 with careful route finding. At the top of the middle section, below the upper cliffs, arrive at a corner at the western edge of the face. 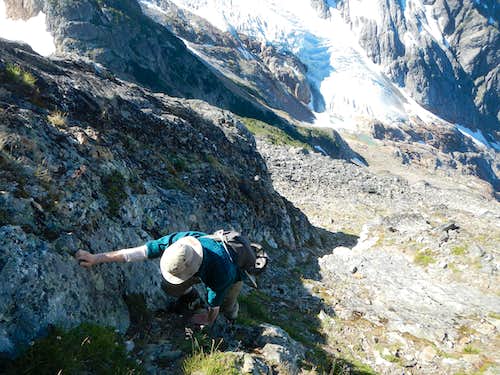 Exposure on the West Face
There is considerable exposure beyond the corner, but the scrambling is not difficult. Work your way down and around onto the west face. Exercise caution here. 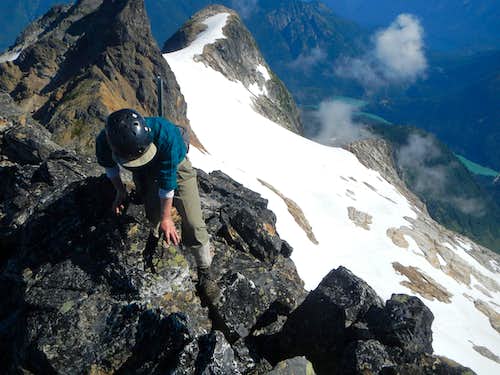 Final Summit Moves
After descending a short distance onto the west face below cliffs, traverse northward on dirt steps and heather to reach the central west slope which allows easier upward travel in shallow gullies. Ascend the steep slope/gullies to reach the summit ridge where a few steep class 3 moves are required to get onto the exposed summit.

Please see the Snowfield Peak page for approach route descriptions as well as driving directions. Also, keep in mind that the Colonial Glacier is melting and turning into a new lake, so later in season it might be necessary to scramble over the rocky rib just east of the lake to reach the glacier.

Paul Bunyans Stump is located in North Cascades National Park. Camping permits are required and must be obtained from the Ranger Station in Marblemount. The trailhead is small (easy to miss) and there are no toilet facilities.